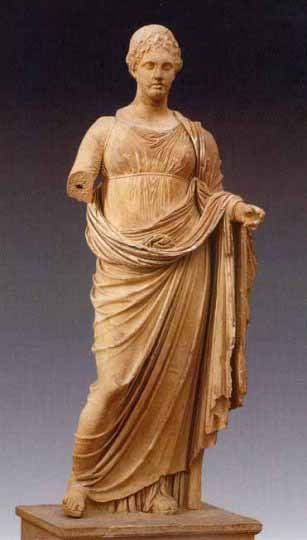 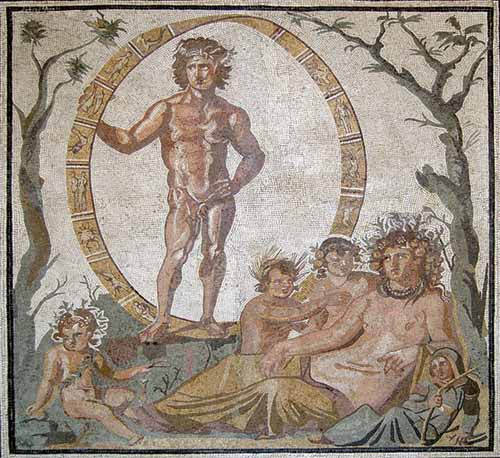 Uranus, also known as Ouranos, was the embodiment of the sky or heavens, and known as the god of the sky. Most Greeks considered Uranus to be primordial, and gave him no parentage, believing him to have been born from Chaos, the primal form of the universe. However, in Theogony, Hesiod claims Uranus to be the offspring of Gaia, the earth goddess. Alcman and Callimachus elaborate that Uranus was fathered by Aether, the god of heavenly light and the upper air Under the influence of the philosophers, Cicero, in De Natura Deorum ("Concerning the Nature of the Gods"), claims that he was the offspring of the ancient gods Aether and Hemera, Air and Day. According to the Orphic Hymns, Uranus was the son of Nyx, the personification of night.

All the offspring of Uranus are fathered upon Gaia, save Aphrodite and the Erinyes, born when Cronus castrated him and cast his severed genitalia into the sea (Thalassa). According to Hesiod, their children included the Titans: six sons (Oceanus, Coeus, Crius, Hyperion, Iapetus and Cronus) and six daughters (Theia, Rhea, Themis, Mnemosyne, Phoebe and Tethys).

There were other offspring: the Cyclopes, (who were named Brontes, Steropes and Arges and were later known as "one eyed giants"), and also the three monsters known as the Hecatonchires, who each had one hundred hands and fifty heads. Their names were Briareus, Cottus and Gyes. Other offspring of Uranus and Gaia were the Erinyes, who were spirits of punishment and goddesses of vengeance. The Erinyes avenged wrongs which were done to family, especially murder within a family.

After Uranus had been castrated, his blood fell to earth (Gaia) and conceived the Giants. These were of monstrous appearance and had great strength. Similarly, in some versions Aphrodite is believed to have risen from the foam created by the sex organs of Uranus after they were thrown into the sea by his son Cronus. Uranus was aghast by the sight of his offspring, the Cyclopes and the Hecatoncheires.

In a differing version Uranus was frightened of their great strength and the fact that they could easily depose him. He hid them away in Tartarus (the bowels of the earth) inside Gaia, causing her intense pain. The discomfort became so great that she asked her youngest son, Cronus, to castrate his father, as this would cease his fertility and put an end to more monstrous offspring. To accomplish this deed Gaia made an adamantine sickle, which she gave to Cronus.

That night Uranus came to lay with Gaia. And as the sky god drew close, Cronus struck with the sickle and cut off Uranus's genitals. From the blood that fell from the open wound were born nymphs and giants, and when Cronus threw the severed genitals into the sea a white foam appeared. From this foam Aphrodite the goddess of love and desire was born.

A slightly differing version tells of Uranus being so vast that he could cover Mother Earth (Gaia) and easily take advantage of her fruitfulness, but Gaia tired of her exuberant fertility and begged her sons to free her from the excessive embrace of Uranus.

All refused except Cronus. Armed with a sickle he castrated Uranus, and the blood which fell from the mutilation gave birth to the Erinyes (Furies), the Giants and the Meliae (Nymphs of the manna ash trees). And when Cronus threw the sickle into the sea the island of Corfu, home of the Phaeacians, sprang up). After Uranus (the sky) had been emasculated, the sky separated from Gaia (the earth) and Cronus became king of the gods. Later, Zeus (the son of Cronus) deposed his father and became the supreme god of the Greek Pantheon.