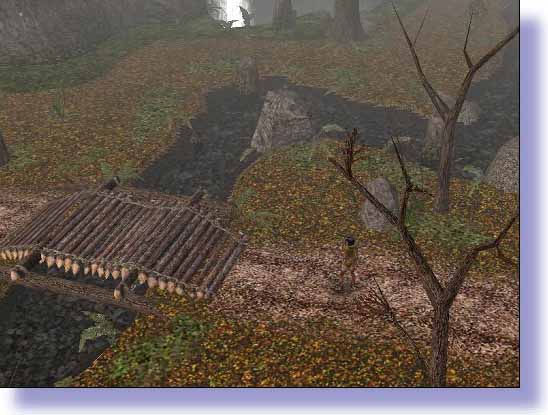 
Wednesday, Messages From Z ... two days before the trip

Ancient archeology will bring you an answer

Don't question, It's right in front of you.

You will hear unusual tones.

The answer is not XYZ; it's ME.

The answer is not what you think.

You'll understand when you're upstate

A man with a hat will help you.

The diner will be on right-hand side of the road ... It was.

You will be aligning Time and Dimension

Arches will guide you

You have to watch or you'll miss something

There is a train in distance on right ... It was

You'll learn something, It's not just about the energy

My friend Pat and I heard whistling in my home last week, from an unknown source.

Sometimes the music box plays out of nowhere.


The Journey Began on Good Friday 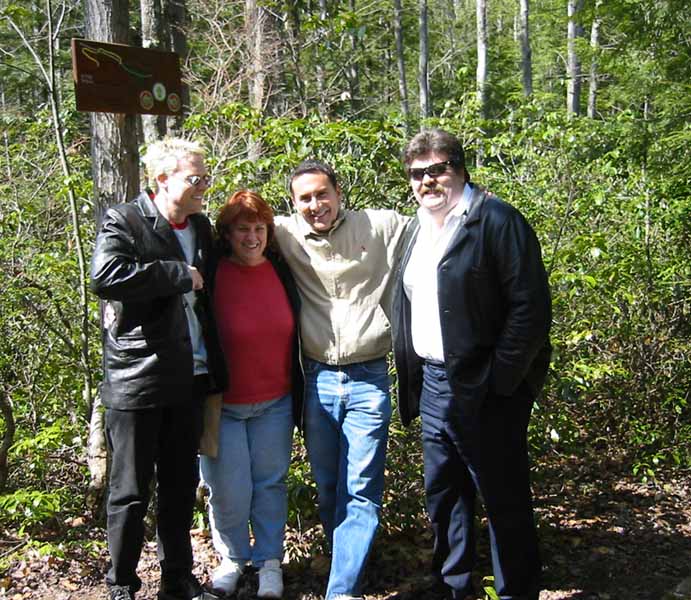 Pat, Ron, Marcus, George and I met outside Port Authority Bus Terminal in Manhattan, 42nd Street and 8th Ave., after a bit of confusion due to Mercury Retrograde. Anticipating these retrograde moments, we decided to meet earlier on, to compensate for delays. It's moments like these that you appreciate cells phones and a knowledge of astrology. After getting under way, Mercury Retrograde did not affect our adventure, as if we were not part of physical reality, but on a guided tour by the Big Z and company.

The drive upstate was filled with ongoing laughter and synchronicities as we headed out of the city, due north, in Ron's white Lincoln Navigator, with its 22 inch shiny chromes rims. You couldn't miss us coming down the road.

Along the way... Z brought me messages that would be part of out trip, signposts, if you will. Among the things to look for were, the police, a stream near a cave, things linked to Sarah and Alexander, a stone, and a spark of light.

As we drove north, we all felt shifts in energy .... stronger and stronger.

To determine the direction I must take when driving on a highway, I always look at the place Z is waiting for me, then head off in that direction. On this day, we all knew where Z was.

As Ron grew up this area, he knew it well. On this day, we would not lose our way.

"A message atop a tree....." We passed a sign above some trees that read , "Brooklyn is returning to the Monticello." (laugh)

The man with the hat turned out to be a gas station attendant named Big G, a tall burly black man with a great sense of humor.

Big G was enamored with the chrome mags on Ron's Navigator as we stopped to ask for direction for a local gas station. Big G looked at Ron and said, "Yo! Dat ride's ... off ... the ... meat ... hook!"

After a humorous exchange of conversation between them ... Ron can really get into the street slang, Big G told us to drive past the police station to find the the 'Blue Horizon' dinner, which was on the right hand side of the road. Blue is Z's frequency, Horizon, Sun Symbology, other metaphors.

As we arrived at the diner, it began to rain. No one was the least bit concerned, as if we all had the weather under control for the rest of the day. It would stop and the sun would come out! And so it did.... it only rained while we having lunch after which the sun came out and the temperature was perfect.

Off we went down the road, each of us guided north, though we had a road map to gives names to the places we were passing.

From 'Sarah and Alexander', we passed a sign that read, 'Twin Crossings'. We were getting closer...

No more than 10 minutes later we passed an Ashram, Atma Nidhi that, I am told, belongs to Siddha Yoga.

This is where we had to go, and we knew it, though we do not study these belief systems. I practice nothing, not even yoga, and meditation is back to communication with spirit not sitting around and waiting for answers.

This journey was about the energies and geometry of the land.

We drove through the entrance and noted that the grounds were well kept, and the energies powerful.

Pat was most familiar with the ashram as she is into energy work. She noticed a statue of Ganesh who is the God of luck and fortune, of doorways, of the household, and of writing.

We were not sure if we would be allowed to stay at the ashram, as we pulled into the parking lot. There were many cars, yet no one was around. The ashram has many small buildings for meditation. The main building is called a meditation 'cave!' We had found our cave. Now we would find the stream. We began to wander along the paths.

1989 was the eventful year that included many global consciousness changes, that lead to the MUFON conference in Las Vegas on July 4th weekend. It was about more than UFO's. It attracted speakers from all aspects of research, science to metaphysics, to conspiracy theorists, when all was not about healing your issues. The conference of about a thousand people opened a giant door for the next phase of human consciousness. The next step would be something called the Internet s the program began its final phase. In 1989 I wrote my first draft of 'Sarah and Alexander'.

The air was crisp and clear as we walked toward the meditation trails.

Once there we quickly discovered that no one was around so off we went into the woods. It was magic come alive. We were all alone on the 4 paths as if in a separate reality, as if in a bubble, no one else around, yet there were many cars in the parking lot. Could the rain have deterred the other people?

We noted that though it had just rained, the ground was not muddy.

Clues were everywhere, as if a giant roadmap.

We found the arches Z told us to look for as a signpost. 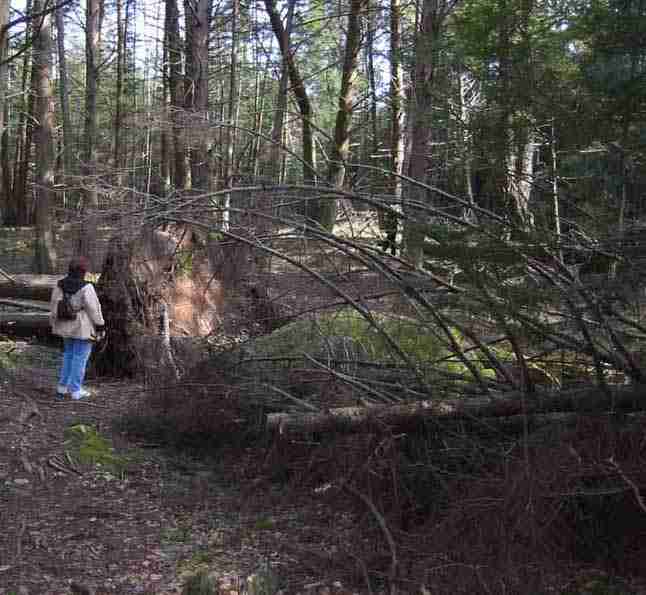 Ron noticed a piece of barbed wire embedded in a tree which reminded him of WW II, 60 years ago. I 'saw 'him as a Jewish man during WWII, wearing a yarmulke on his head. I can surmise that we all know each other through the loops of time and dimension.


We saw trees in a circle that had recently fallen.

Trae and the Trees 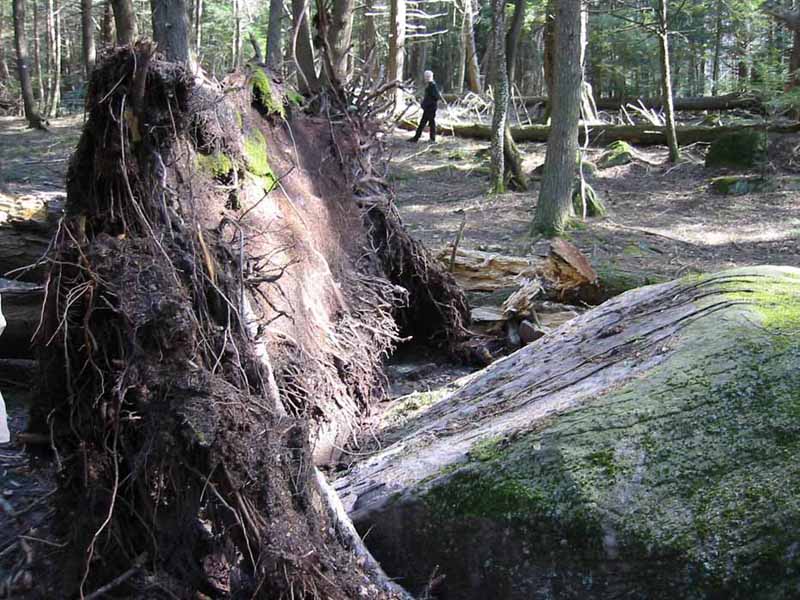 We found several trees with mushrooms and a vine in the shape of a heart with water flowing through. 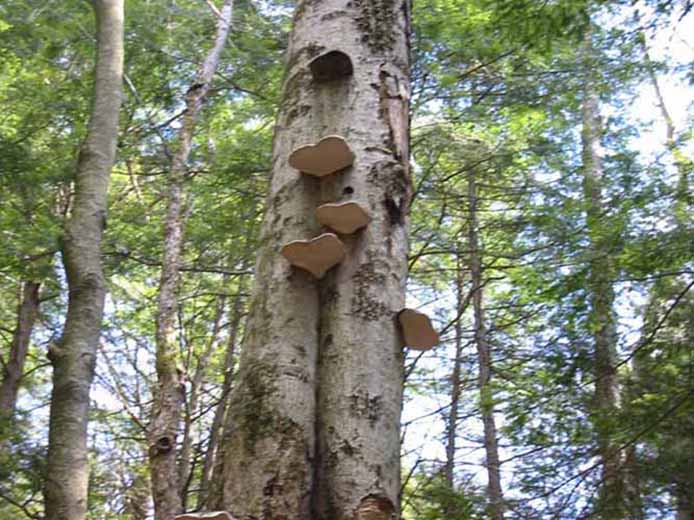 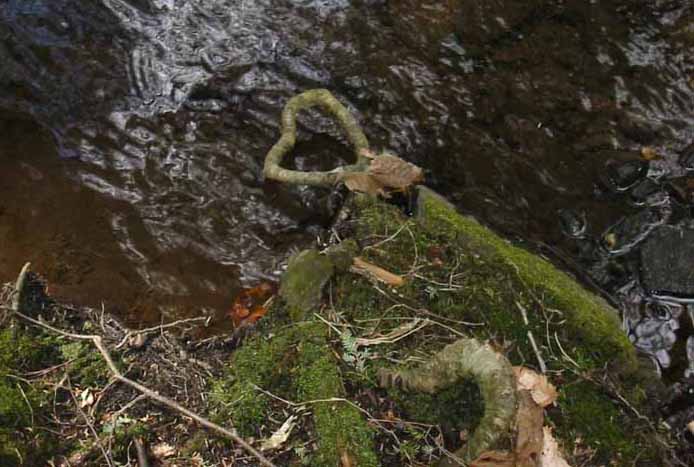 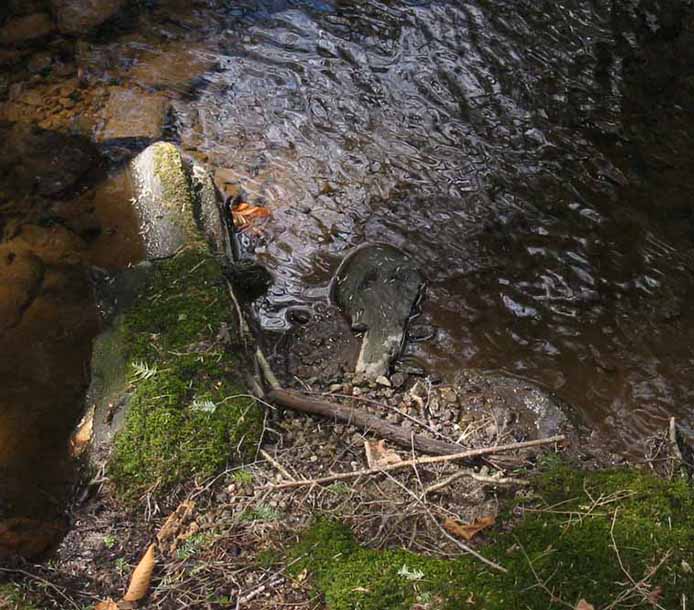 Suddenly, there was the stream and footbridge as if out the Sarah and Alexander. 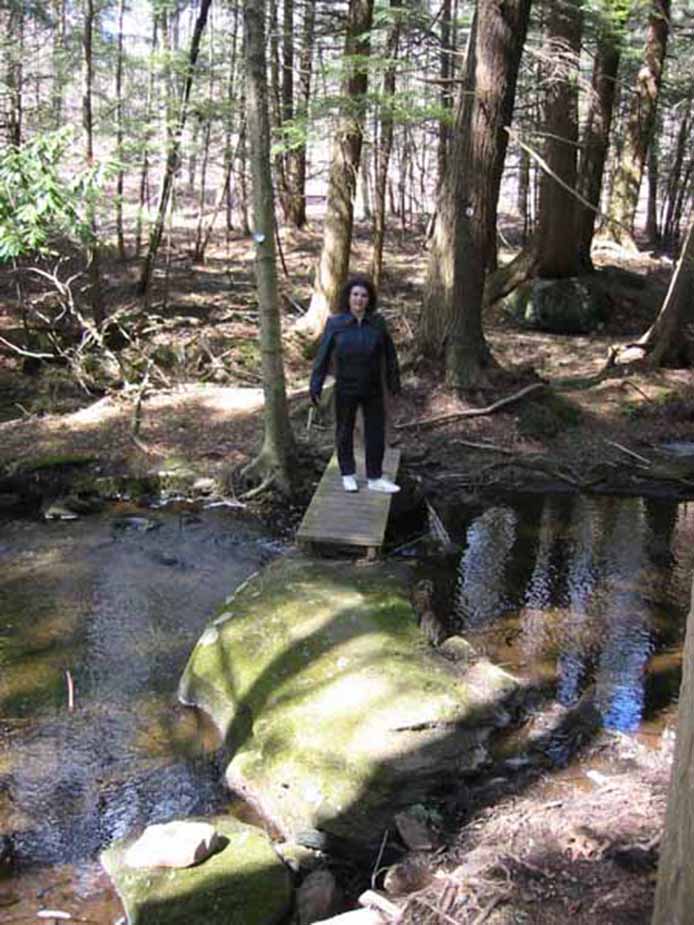 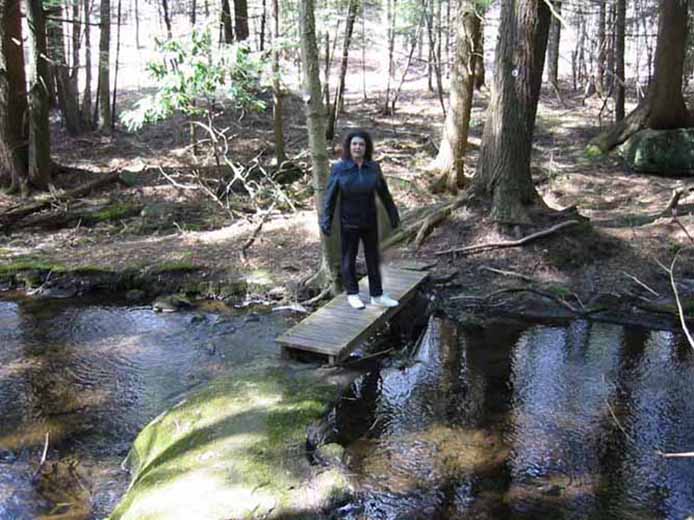 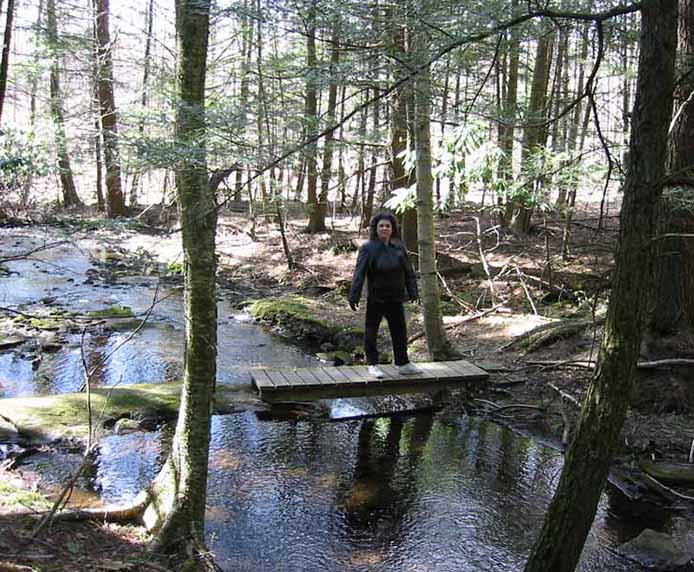 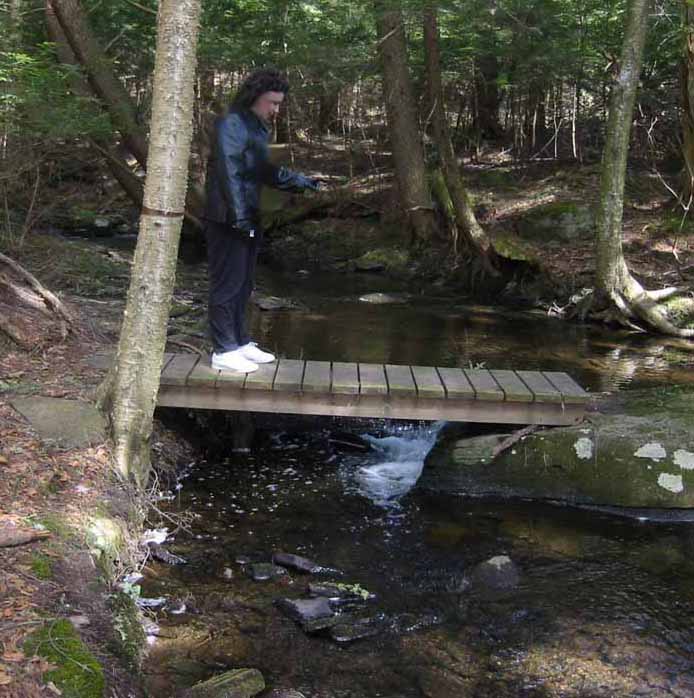 The water beneath the bridge had a small area that flowed together. This is a symbols I have seen for all of my life, used to dream about it, and never knew exactly what it meant. It now became more that a metaphor. Streaming information... Merges 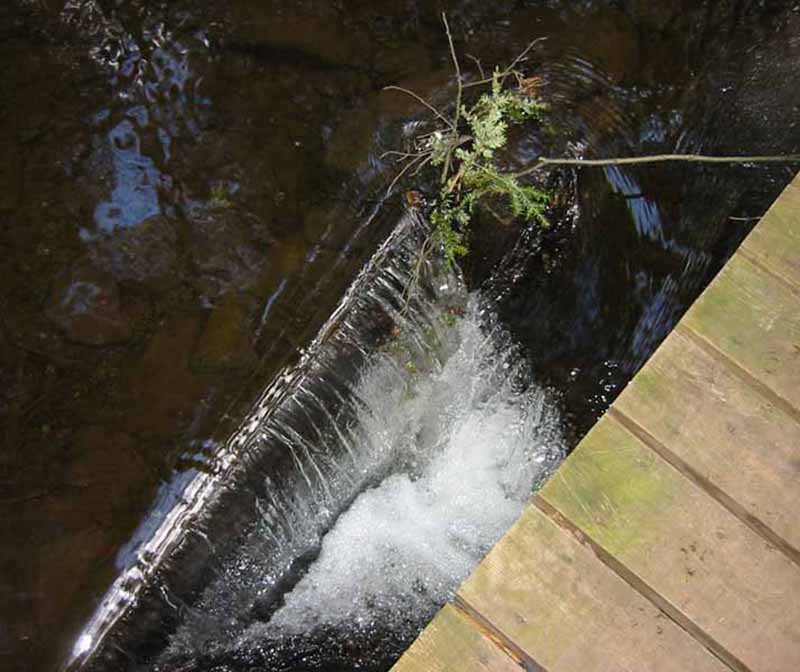 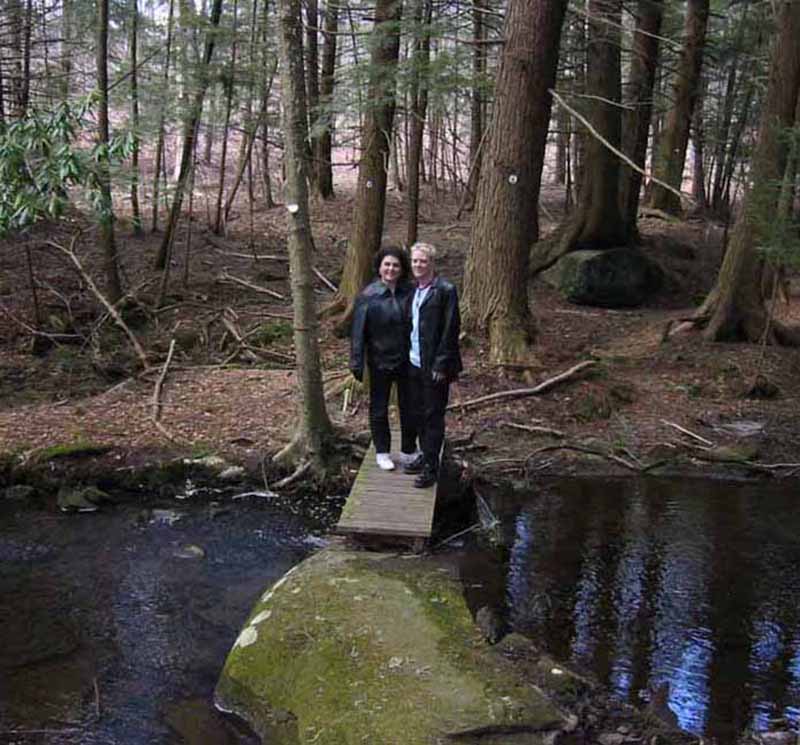 To your right, behind us, is the tree growing around the stone. 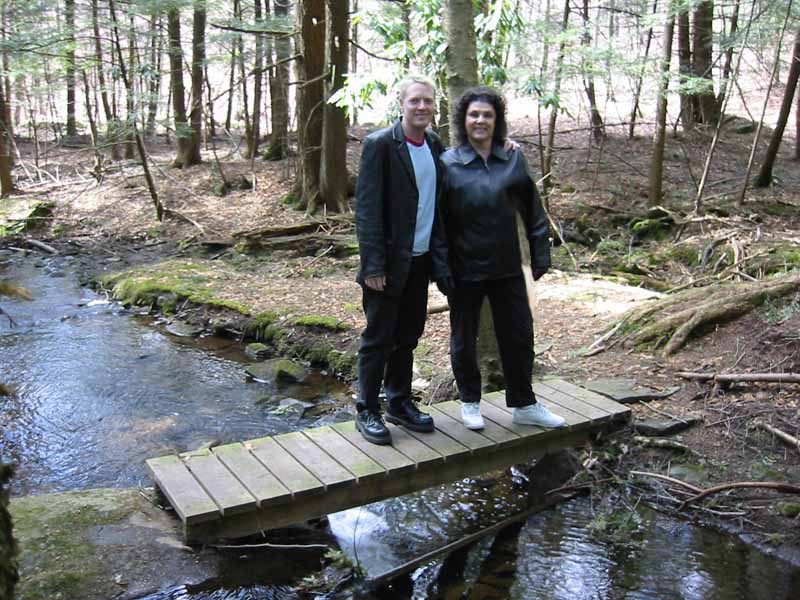 
I crossed over the footbridge with AlexZander/Trae. We stood by the tree and the stone. Thoughts of Merlin and the Magic of time and dimension entered my mind. Our link with time and space would now be shown.

Intuitively I placed my left hand on tree and my right hand on a large rock nearby. Intuitively Trae placed his right hand on tree and left hand on the large rock. The energy felt like a huge generator, electromagnetic energy, surges of energy through the tree and the rock. Trae and I connected the energies of the tree and stone rock to the Great Pyramid .... then to the Verrazano Bridge back home in Brooklyn. The energy of what we were doing was sent through the grids, all grids, and all other trees.

I am not certain how long Trae and I stood there. Though we assumed we were there for 40 minutes, we later discovered it was two hours. Trae and I were given the tools to complete our work here. This level of alchemy and consciousness cannot be placed into words or written symbols.

Ron, Pat and George walked a short distance away from Trae and I, to allow us time alone. When we rejoined them, they reported that that had heard funny noises above the trees as Trae and I touched the tree and stone. Ron said that the noises sounded like a rusty gate or door, or rusty old weather vane changing direction, or large rusty gears turning. They couldn't place the location of the noise because at one point it was in front of them, then it was ahead of them, then it was above them. It was definitely not a bird nor an animal.

Along the way we saw the spark of light Z had mentioned. It was sun reflecting off of a balanced rock near the top of a hillside.

I looked over at Ron and and his pupils appeared to be missing. Pupil, student. Void of creation. Depictions of the Gods. It was all about his eyes, windows of the soul, the all seeing eye, ancient mystery schools, freemasons, Eye of Ra, Sun gods in all programs, one must see beyond the physical eyes...etc. 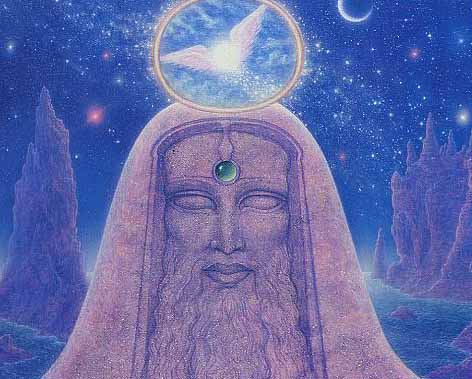 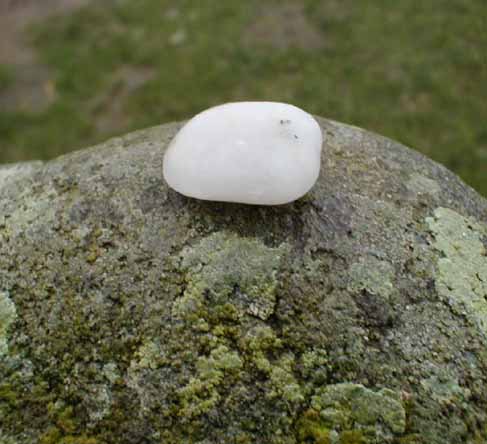 In my wake-up dream four days later, I was given a white stone. It was small enough to hold in my hand. After I awoke I did a search for white stone symbology. The White Stone is the Philosopher's Stone turning metal into gold, transmutation of consciousness, through the spirals of DNA.

In the year 2012, Sarah Manning races against time to fulfill a prophecy set in motion by her ancient ancestors, the Guardians of the Seed. Connected to the ancient mystery schools, this epoch adventure, spanning 72 years, and crossing 3 continents, explains the foundations of reality, and the prophecies of time. In essence, the story of "Sarah and Alexander" is the esoteric history of the human race. The protagonist's struggle to pry open her family's dark secrets is also humanity's struggle to uncover its hidden past. This tale, written hard against the backbone of history, is awash with mythic overtones and replete with revelations of mystical realities. Journey with Sarah to unlock many of your own truths. The screenplay adaption of the book, titled "2012, The Alchemy of Time" is waiting to be discovered by the right producer.