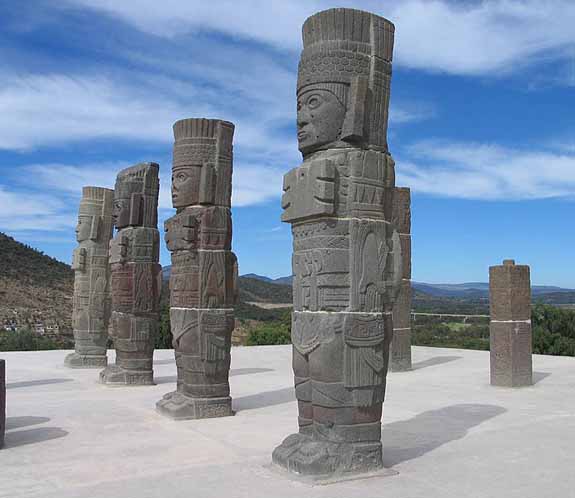 The word Toltec in Mesoamerican studies has been used in different ways by different scholars to refer to actual populations and polities of pre-Columbian central Mexico or to the mythical ancestors mentioned in the mythical/historical narratives of the Aztecs. It is an ongoing debate whether the Toltecs can be understood to have formed an actual ethnic group at any point in Mesoamerican history or if they are mostly or only a product of Aztec myth. The scholars who have understood the Toltecs to have been an actual ethnic group often connect them to the archeological site of Tula, Hidalgo which is then supposed to have been the Tollan of Aztec myth.

This tradition assumes the "Toltec empire" to have dominated much of central Mexico between the 10th and 12th century AD. Other Mexican cities such as Teotihuac‡n have also been proposed to have been the historical Tollan "Place of Reeds", the city from which the name Tolteca "inhabitant of Tollan" is derived in the Nahuatl language.

The term Toltec has also been associated with the arrival of certain Central Mexican cultural traits into the Mayan sphere of dominance that took place in the late classic and early postclassic periods, and the Postclassic Mayan civilizations of ChichŽn Itz‡, Mayap‡n and the Guatemalan highlands have been referred to as "toltecized" or "mexicanized" Mayas. For example the striking similarities between the city of Tula, Hidalgo and Chichen Itza have often been cited as direct evidence for Toltec dominance of the Postclassic Maya.

This line of scholarship was popular in the first half of the twentieth century but has largely been abandoned in recent decades in favour of a more critical and interpretive approach to the historicity of the Aztec mythical accounts, that applies a different understanding of the word Toltec.

This tradition has interpreted the concept of Toltecs largely as an Aztec or generally Mesoamerican mythical and philosophical construct that has served to symbolize the civilizedness and might of several different cultures of the Mesoamerican Postclassic period.

Among the Nahuan peoples the word "Tolteca" was synonymous with artist, artisan or wise man, and "toltecayotl" "Toltecness" meant art, culture and civilization and urbanism - and was seen as the opposite of "Chichimecayotl" "chichimecness" which symbolized the savage, nomadic state of peoples who had not yet become urbanized. This interpretation argues that any large urban center in Mesoamerica could be referred to as "Tollan" and its inhabitants as Toltecs - and that any ruling lineage in postclassic Mesoamerica would strengthen their claims to power by claiming Toltec ancestry.

Often Mesoamerican migration accounts state that Tollan was ruled by Quetzalcoatl (or Kukulcan in Maya and Gukumatz in K'iche') a godlike mythical figure who was later sent into exile from Tollan and went on to found a new city somewhere else in Mesoamerica.

Such claims of Toltec ancestry and a ruling dynasty founded by Quetzalcoatl have been made by such diverse civilizations as the Aztec, the QuichŽ and the Itza' Mayas. While the sceptical tradition does not deny that cultural traits of a seemingly central Mexican origin have diffused into a larger area of Mesoamerica they tend to ascribe this to the dominance of Teotihuac‡n in the Classic period and the general diffusion of Cultural traits within the region.

Recent scholarship thus do not see Tula, Hidalgo as a "Toltec" site but rather tries to find clues of the ethnicity of the people who built it. Lately it has been suggested that they were in fact Huastecs.

The early tradition read the ethnohistorical sources and tried to find confirmation of these stories through archeology, but the sceptical tradition does not accept this method as fruitful because basing the understanding of Mesoamerican history on mythical accounts that were not meant to reflect actual history may lead to biased interpretations of archeological findings. Instead they prefer to let archeology speak for itself and interpret the ethnohistorical sources in a way that corroborates rather than defines the archeological findings.

During the late twentieth century, the word Toltec acquired a new meaning within certain New Age circles, largely because of the use of the word by Carlos Castaneda and others inspired by him such as Victor Sanchez. For the concept Toltec as used in the writings of Carlos Castaneda, see: Toltec (Castaneda).

The Toltec language was called Nahuatl, also spoken by the Aztecs.

Most Toltec history is known from writings of later people, such as the Aztec, written centuries later after a "dark age" in Central Mexico, together with some references by the Maya. Toltec rulers are said to have included:

The Toltec Empire and leaders created an unmatched mystique in the minds of the Central American people. The Toltec leaders were thought of as being alongside deities. Later cultures often revered them and copied their legends, art, buildings and religion. Many future rulers of other cultures, including Mayan leaders and Aztec emperors, claimed to be descended from the Toltecs.

The Toltecs sported the familiar ball game played by many central American cultures and may have sacrificed of the losers. Toltecs are known for their somewhat rougher form of architecture, a form that would later inspire the Aztec builders. Toltec art is characterized by walls covered with snakes and skulls, images of a reclining Chak-mool (red jaguar), and the colossal statues of the Atlantes, men carved from great columns.

Religion in the Toltec Empire was dominated by two major deities. The first, Quetzalcoatl, is shown as a plumed serpent. This deity of learning, culture, philosophy, fertility, holiness and gentility was absorbed from earlier cultures in the area. His rival was Tezcatlipoca, the smoked mirror, known for his warlike nature and tyranny.

The greatest ruler of the Toltecs was Ce Acatl Topiltzin who was renown for being the leader and high priest of Quetzacoatl at the time when Tula and the Empire were established. According to Toltec legend, Tezatlipoca's followers drove Topiltzin and the followers of Quetzalcoatl out of the city around 1000 AD. They fled south, where they were able to defeat the Maya at the city of Chichen Itza, and take it for their own. An interesting twist in Topiltzin's legend is that he vowed to return to Tula from the east in one of his sacred years and take his vengeance. This legend lived all the way to the time of the Aztecs, who attributed the arrival of the Spanish as the return of Topiltzin, an event that they feared greatly.

The history of the Toltec culture at Teotihuacan is shrouded in mystery. It is speculated that around the year 500 AD the Toltec Naguals and all their parties had learned how to transmute, to go through the Black Feathered Sun to the place of creation.

Serpent columns of the Toltec Temple of the Warriors, Chichen Itza, Yucat‡n, 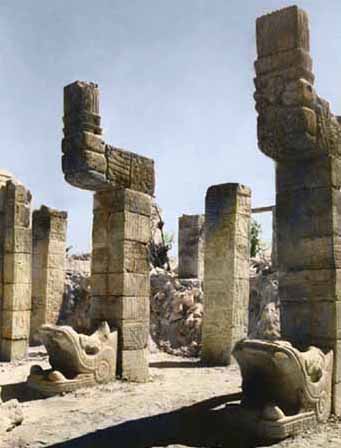 accord with the world tradition: the male dragon manifest as the pillar of heaven 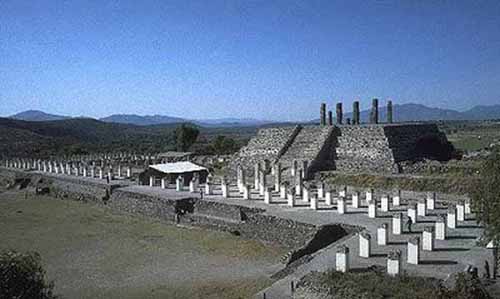 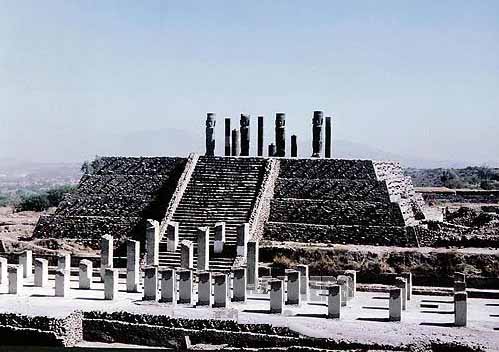 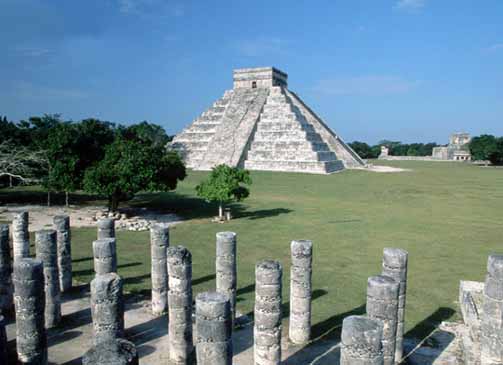 at Temple of the Warriors

The entire culture is believed to have ascended leaving the pyramids of Teotihuacan in abandonment until they were uncovered 500 years later around 1000 AD by the Aztecs, warriors who in their time conquered much of Mexico. The Aztecs were attracted to the Pyramid and adopted them as their own. Unlike the Toltecs, the Aztecs abused their power, not understanding the records of the Toltec teachings found at the pyramids. The Toltecs taught of the giving of the open heart to the Sun whereas the Aztecs took that to mean performed human sacrifice.

Toltec have been known throughout southern Mexico as "women and men of knowledge" for many centuries. Anthropologists have spoken of the Toltec as a nation or a race, but in fact, the Toltec were scientists and artists who formed a society to explore and conserve the spiritual knowledge and practices of the ancient ones. It may seem peculiar that they combined the secular with the sacred, but the Toltec considered science and spirit to be one and the same since all energy, whether material or ethereal, was derived from the one source and influenced by the same universal laws.

The Toltec came together as Toltec masters and students at Teotihuacan, the ancient city of pyramids outside Mexico City known as the place where "Man becomes God". Here, in order to realize the promise of the work to transcend the realm of ordinary human awareness and attain their personal freedom, the apprentices studied the three Toltec masteries: Awareness, Transformation (Tracking) and Intent. The students had to have the courage to face and know themselves and, through that knowing, change their way of life. Teotihuacan remained the Toltec center of spiritual knowledge and transformation for many thousands of years and still endures as a living repository of "silent knowledge".

The ancient Toltec knew that our perception of reality was just a point of view, one that generally doesn't consider how we fit into an expanding, living, intelligent universe. As we begin to identify the I AM, we become aware of how limited we have been conditioned to think we are and how little of our potential energy supply we use. To transcend the realm of our old dream and move into our full potential, we need to transfer the point where we "assemble" our perception from our "reason" to our "will". Shifting the source of our personal power from our mind to our spirit allows us to access "silent knowledge" and create the energy necessary to remember what we have forgotten. We can all dream a new dream and live a life of freedom - it is a matter of choice and will. Once we make that choice, it is helpful to find a guide to assist us on our progression towards freedom.

There are those who believe the Toltec descend from mythical Atlantis. 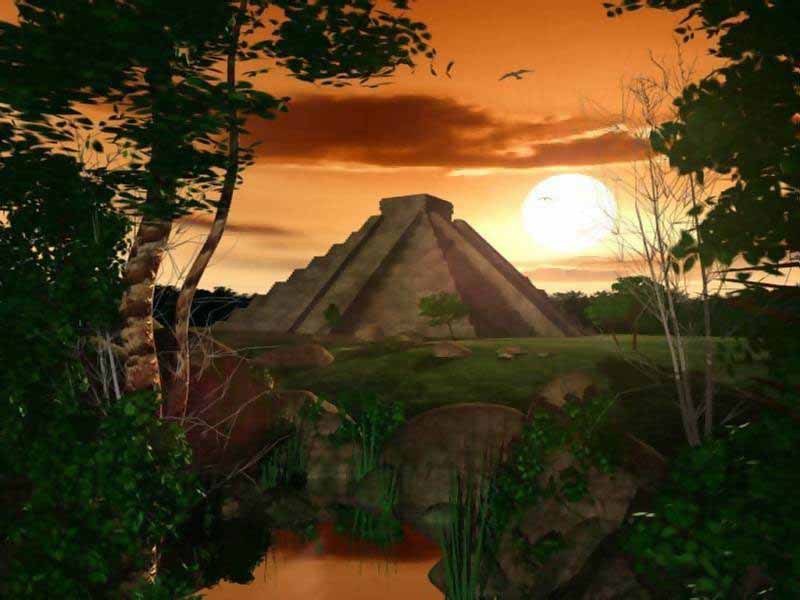