The Syncretism of the Gods 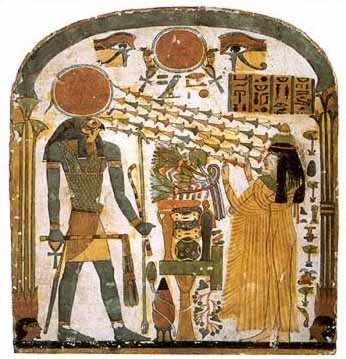 In order to understand the gods of ancient Egypt, one must understand syncretism. This is the Egyptian practice of linking, or combining different deities into the body or identity of a single entity (often, but not always with a composite form), which became more and more common with the passage of time. In form, most commonly, the god's names were simply linked, creating synchronized gods such as Atum-Khepri, Re-Horakhty, and Amun-Re. This process could also bring together Egyptian and foreign gods.

Anat-Hathor was an Asiatic-Egyptian god, while Arensnuphis-Shu was the combination of Meroitic and Egyptian deities. Perhaps one of the most famous such synchronizations was that of Serapis during the Ptolemaic (Greek) period, who was a combination of Osiris, Apis, Zeus and Helios, as well as perhaps some other minor deities, though in reality, he was more of a political assemblage. There are few aspects of ancient Egyptian religion that are more complicated or more confusing then syncretism, and yet, more important to the understanding of ancient Egyptian religion.

Early Egyptologist thought that this syncretism simply combined conflicting or competing deities, but later analysis has largely proven this assumption to be incorrect. In many cases, there was obviously no conflict between synchronized deities, and there was also no clear reason why the two deities should not have simply been worshipped side by side, as in the case of Horus and Sobek at Kom Ombo during the Ptolemaic Period. Other Egyptian deities were simply worshipped in multiple chapels in temples throughout the land from much earlier times.

It was perhaps Hans Bonnet who first characterized syncretism as the realization of the idea of one god "inhabiting" another rather then two gods being fused, equated or identified.

We may more closely examine syncretism of gods by investigating the relationships of the sun god Re. Re was a very important god to the ancient Egyptians, who first appears as early as the 2nd Dynasty. This deity was thought of as a creator god early on, but other gods such as Atum were also seen by the Egyptians to have creator attributes.

Hence, the Egyptians saw in Atum an aspect of Re, and it was Re within Atum who allowed him to be a creator god. From the Middle Kingdom on, such links became more common, with examples such as Sobek-Re, Khnum-Re, and of course Amun-Re, who became a state god in his solar and creator aspects as Re. Specifically, syncretism means that the ancient Egyptians recognized Re in all of these very different gods as soon as they encountered them as creator gods.

Likewise, they also recognized the sky god Horus in any other god who took the form of a hawk.

However, in order to completely (or at least as much as possible) understand syncretism, we must examine other ways in which Egyptian religion formulated a link between two or more deities. These include:

1. Kinship, where deities are found together in a family as father, son, spouse, brother etc.

2. Statements that a god (or the king) is the "image", "manifestation", or ba of another. For example, Amun is said to have "made his first manifestation as Re", which is very different than his syncretistic form of Amun-Re.

3. Other occasional and complicated theological statements about the union of two gods. Most of these relate to some form of union between Re and Osiris. For example, it is said that the bas of Osiris and Re meet each other in Mendes and there become the "united ba", which, according to the Stela of Ramesses IV from Abydos, "speaks with one mouth". The Coffin Texts also has a common formula that Osiris has "appeared as Re". In a relief in the tomb of Nofretri is depicted a ram-headed mummy between Isis and Nephthys. The scene is captioned, "This is Re when he has come to rest in Osiris" and "This is Osiris when he has come to rest in Re", deliberately leaving open which god has come to rest in the other. We also find above the entrances to Ramessid era royal tombs Isis and Nephthys proclaiming that both Re and their bother Osiris occupy the same heavenly body. In fact, in the Book of the Dead, the two gods appear to be so united that in many passages their names seem to be interchangeable and in the Amduat, the corpse of the sun god is at the same time the corpse of Osiris.

When, in the judgment of the dead, it is not clear which of the two entirely different gods, Osiris or Re should preside, one might think that the syncretistic formula Re-Osiris would be suitable. However, the Egyptian theologians deliberately avoided this distinction, and a careful analysis may enlighten us on the nature of syncretism. One variant of the Nofretiri formula can be found from the Ramessid period, which describes the union of Re and Osiris in the ram-headed mummy. Here, the formula is followed by the adverb, "daily", thus showing that Re enters into Osiris and Osiris enters into Re daily. Therefore, this union is also dissolved again daily. 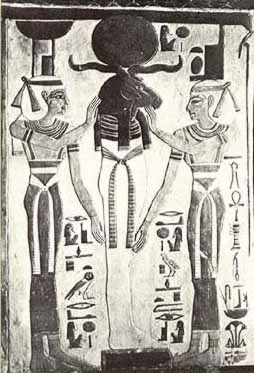 In the murder of Osiris, the ancient Egyptians encounter the inevitability of death, for even the gods could die. However, by the Middle Kingdom, common Egyptians could become an "Osiris", a privilege once reserved for royalty alone. Hence, they were, if judged to have lived a good life, allowed access to the afterlife as the blessed dead. Egyptians bore the god's name, "Osiris" like a title or designation in front of their own, which does not genuinely identify them with the ruler of the dead, but rather allows them, through their own efforts, to take on the previously determined role that bears the name Osiris just as Re must also become "Osiris" in his daily descent into the realm of the dead.

The difference is that Re does not assume the title of "Osiris", but rather incorporates the ruler of the dead into his own being so profoundly that both have one body and can "speak with one mouth". In this regard, Osiris does seem to be absorbed into Re, and become the night sun, though this union is of short duration. When the sun god once again appears on the morning horizon, he is no longer Osiris, though according to the Amduat, the deity leaves behind an "Image" that is the outward shell of the god who was Re and Osiris in one. This is clearly a different form then the syncretism of two gods.

The ancient Egyptians evidently understood the complexity of their polytheism, and so they attempted to carefully formulate their descriptions regarding godly associations. Of these formulas, the syncretistic variety was one of the oldest. Because it does not attempt to imply identity or fusion of various gods, it can combine deities that have different forms, and in rare instances, even those of opposite sex. Very often, more than two gods were even synchronized, including examples such as Ptah-Sokar-Osiris and even Amun-Re-Harakhte-Atum, or Harmachis-Khepry-Re-Atum. 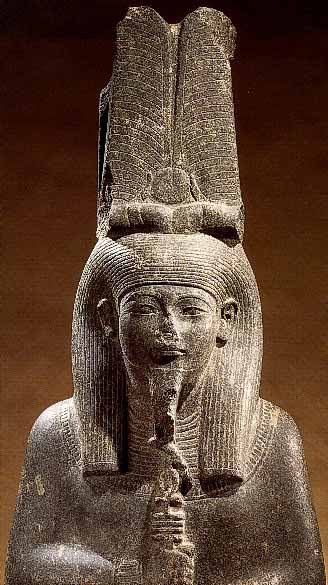 Finally, we must recognize that it was not evidently natural for Egyptian gods to be strictly defined. They remained in a 'fluid' state to which we in our modern world are not accustomed. There is no final definition of these gods, and they may always be extended or further differentiated, and in fact, the combination of gods are transitory and can be dissolved at any time. This fluidity leaves no room for monotheism, which bases itself on unambiguous definitions. It must be remembered that, in the afterlife, the deceased Egyptian who takes on the role of a god also wished to assume many other forms and appear under many names, and there were numerous "transformation spells" in the mortuary text to accomplish just this end.

Syncretism was an essential feature of Greek paganism. Hellenistic culture in the age that followed Alexander the Great was itself syncretic, essentially a blend of Persian, Anatolian, Egyptian (and eventually Etruscan-Roman) elements within a Hellenic overall formula. The Egyptian god Amun developed as the Hellenized Zeus Ammon after Alexander the Great went into the desert to seek out Amun's oracle at Siwa.

These identifications derive from the Hellenic habit of identifying gods of disparate mythologies with their own. When the proto-Greeks whose language would evolve into Greek first arrived in the Aegean and mainland Greece early in the 2nd millennium BCE, they found localized nymphs and divinities already connected with every important feature of the landscape: mountain, grove, cave and spring all had their locally-venerated deity. The countless epithets of the Olympian gods reflect this syncretic character. "Zeus Molossos", as worshiped only at Dodona, is "the god identical to Zeus as worshipped by the Molossians at Dodona." Much apparently arbitrary and trivial mythic fabling is the result of later mythographers' attempts to explain these obscure epithets. Syncretism