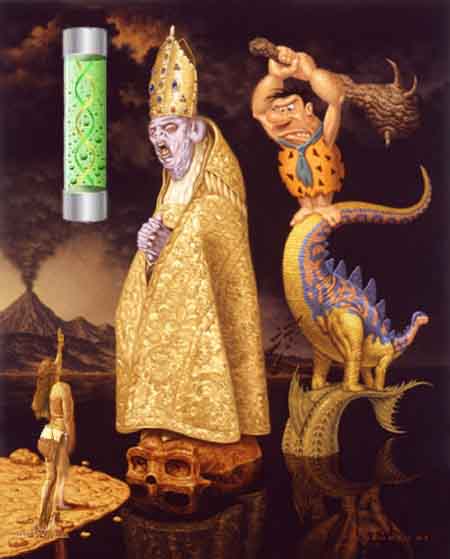 Did superstitions develop along with the evolution of humanity? Is superstitious reasoning an inheritable, evolutionary feature as experience here is based on genetic codes and social conditioning?

One can assume that early humans attributed superstitious beliefs to the unknown, mainly linked to fear. As with all human traditions, stories get passed down from generation to generation, with some people programmed to believe them and others thinking they make no sense. Is this any different than believing in imaginary gods who are worshipped and will one day return?

Superstitions often seem irrational, even stupid, but they a widespread and pervasive part of human life. Using a mathematical model, researchers investigated whether superstitious behavior is a predicted product of evolution by natural selection. The results suggested that superstitions are a part of adaptive behavior in all organisms as they attempt to make sense of an uncertain world.

Humans are heavily affected by culture as well as evolution. Nevertheless, analysis suggests that cultural effects are shaped by an evolved tendency to readily associate events, so readily that individuals often make superstitious mistakes. What we today call "superstitious" behavior today is basically just the expression of ancient instincts that, for many animals in the past and even today, has probably had positive survival value.


How far will you go to avoid bad luck? Do you avoid walking under ladders, carry lucky charms, or perhaps instead perform special rituals before important meetings or sporting events?

If you do any of those things, hold your head up high and be proud, because researchers are finding evidence that superstitions may not be as pointless at all. By adopting a belief that you can -- or cannot -- do something to affect a desired outcome, you're among the cadre of beings that learn. By the way, that cadre includes pigeons.

Superstition is an evolutionary surprise -- it makes no sense for organisms to believe a specific action influences the future when it can't. Yet superstitious behavior can be recognized in many animals, not just humans, and it often persists in the face of evidence against it. Superstitions are not free -- rituals and avoidances cost an animal in terms of energy or lost opportunities. The question becomes how can natural selection create, or simply allow for, such inappropriate behavior?

The study suggests multiple reasons for such anomalies to exist: perhaps superstition is adaptive as a placebo, or for social bonding. Or maybe it really is maladaptive now, but is "the outcome of traits that were adaptive in ancestral environment; sort of like cognitive wisdom teeth," said Abbott.

The first description of superstitious behavior in animals came from psychologist B.F. Skinner in 1948. He put half-starved pigeons in cages, offering them a few seconds of access to food trays at regular intervals. As long as the intervals were short, the birds began offering up behaviors -- like spinning counter-clockwise, rocking from side to side or tossing their heads up as if they were lifting a bar. They would do these behaviors "as if there were a causal relation between [its] behavior and the presentation of food," wrote Skinner. Once the behaviors were established, they tended to persist, even as time intervals between feeding lengthened.

Skinner's work compared pigeon behavior to conditioned responses; the birds were trying to learn to produce the food on their own. That they believed their actions were causal when they weren't made them look, well, stupid.

In 1977, Peter R. Killeen wrote in Science that he challenged the conclusion that "animals were as badly off as Skinner's analysis suggests." Killeen, then a professor of psychology at Arizona State University, gave his pigeons opportunities to detect whether or not a result was due to their actions or simply random. Killeen found that the birds could discern subtle differences, even scoring as well as humans asked to make the same discriminations. The birds could judge cause and effect, at least when they had all the information they needed. Today Killeen concludes that insufficient data or "prior beliefs" could guide birds to the wrong conclusions.

In models described in 2009, Foster and Kokko compared superstition to a good wager. A mouse, hearing a rustle in the grass bets it's a cat and dives underground. That the mouse also dives underground at the rustle of a wind-blown tree branch is not stupid, but more likely reflects that lack of data -- the mouse can't tell if the rustle is a cat in the grass or wind in the trees.

Abbott and Sherratt's work goes a step further, designing choice and experience into their model. They base it on a Ôtwo-armed bandit' scenario. A one-armed bandit is a slot machine -- you take a chance on paying to play because you think you might win, and the pay-off is big. A two-armed bandit gives you choice between two arms, one you have experience with and one you don't. The same model holds true for animals.

Built into this new model is the ability to run multiple trials and to learn from them. The results account for change based on experience, with parameters for preference that can allow for change or leave the subject mired in superstitious habit. So no longer is the subject basing a decision on a single event, one rustle in the trees. Now what happened in the last 10 or more trials has an impact. The results tend to follow common sense: you will dump an old superstition if it is not too expensive in comparison with your old ways -- the model predicts what we tend to see in real life.

This model tests the robustness of superstitions, and how they might persist in the face of contradictory evidence. The more times you carry a lucky charm the more likely you will be convinced it doesn't work, surprisingly only if you originally believed it would. If you doubted it in the first place, a large number of trials might present you with enough positive experiences so that you might very well begin to believe.

"Their work is helpful," said Marc Mangel, an applied mathematics and statistics professor at the University of California, Santa Cruz. "It shows how these adaptive learning mechanisms can be leading us to places we shouldn't go." But Killeen thinks something is left out of their model, elegant as he thinks it is. "Sometimes simpler answers suffice; for beasts like us who are never quite sure that we are well enough informed, taking that multivitamin and knocking wood puts the semblance of control back in our hands, and that feels good," Killeen said.