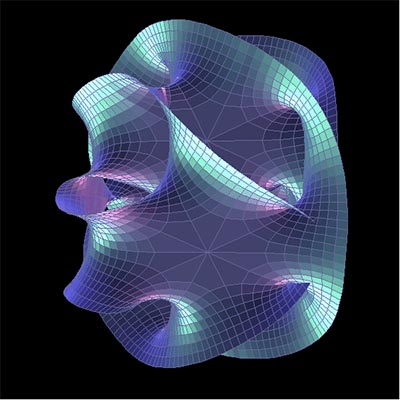 String Theory predicts the existence of more than the 3 space dimensions and 1 time dimension we are all familiar with. According to string theory, there are additional dimensions that we are unfamiliar with because they are curled up into tiny complicated shapes that can only be seen on tiny scales. If we could shrink to this tiny, Planck-sized scale we could see that at every 3D point in space, we can also explore 6 additional dimensions. This animation shows a Calabi-Yau surface which is a projection of these higher dimensions into the more familiar dimensions we are aware of.

String theory was first studied in the late 1960s as a theory of the strong nuclear force before being abandoned in favor of the theory of quantum chromodynamics. Subsequently, it was realized that the very properties that made string theory unsuitable as a theory of nuclear physics made it an outstanding candidate for a quantum theory of gravity. Five consistent versions of string theory were developed before it was realized in the mid-1990s that these theories could be obtained as different limits of a conjectured eleven-dimensional theory called M-theory.

Many theoretical physicists (among them Stephen Hawking, Edward Witten, and Juan Maldacena) believe that string theory is a step towards the correct fundamental description of nature. This is because string theory allows for the consistent combination of quantum field theory and general relativity, agrees with general insights in quantum gravity such as the holographic principle and black hole thermodynamics, and because it has passed many non-trivial checks of its internal consistency. According to Hawking in particular, "M-theory is the only candidate for a complete theory of the universe." Other physicists, such as Richard Feynman, Roger Penrose, and Sheldon Lee Glashow, have criticized string theory for not providing novel experimental predictions at accessible energy scales and say that it is a failure as a theory of everything. Read more ... 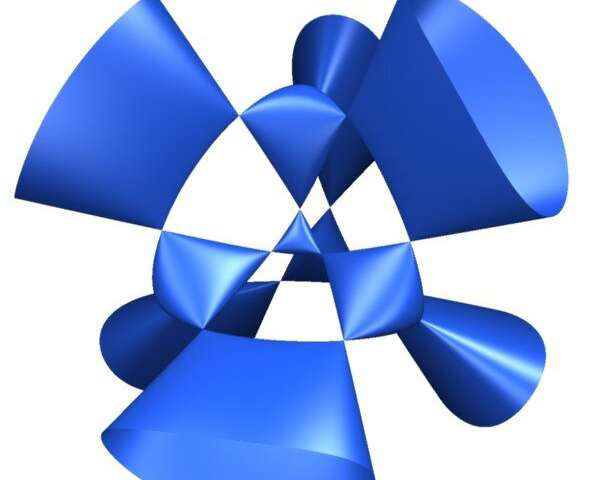 Simply put, string theory is a proposed method of explaining everything. Actually, there's nothing simple about it. String theory is a theoretical framework from physics that describes one-dimensional, vibrating fibrous objects called "strings," which propagate through space and interact with each other. Piece by piece, energetic minds are discovering and deciphering fundamental strings of the physical universe using mathematical models.


The universe could possibly have more dimensions. Here's how 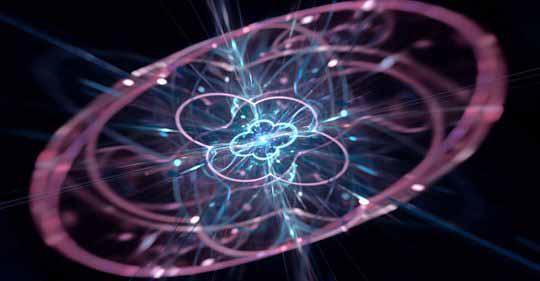 String theory is a purported theory of everything that physicists hope will one day explain ... everything. All the forces, all the particles, all the constants, all the things under a single theoretical roof, where everything that we see is the result of tiny, vibrating strings. Theorists have been working on the idea since the 1960s, and one of the first things they realized is that for the theory to work, there have to be more dimensions than the four we're used to.


Scientists find a practical test for string theory   PhysOrg - January 6, 2014
Scientists at Towson University in Towson, Maryland, have identified a practical, yet overlooked, test of string theory based on the motions of planets, moons and asteroids, reminiscent of Galileo's famed test of gravity by dropping balls from the Tower of Pisa. String theory is infamous as an eloquent theoretical framework to understand all forces in the universe - a so-called "theory of everything" that can't be tested with current instrumentation because the energy level and size scale to see the effects of string theory are too extreme.


A 40-year-old puzzle of superstring theory solved by supercomputer   PhysOrg - December 23, 2011
A group of three researchers from KEK, Shizuoka University and Osaka University has for the first time revealed the way our universe was born with 3 spatial dimensions from 10-dimensional superstring theory in which space-time has 9 spatial directions and 1 temporal direction. This result was obtained by numerical simulation on a supercomputer. According to Big Bang cosmology, the universe originated in an explosion from an invisibly tiny point. This theory is strongly supported by observation of the cosmic microwave background and the relative abundance of elements. However, a situation in which the whole universe is a tiny point exceeds the reach of Einstein's general theory of relativity, and for that reason it has not been possible to clarify how the universe actually originated.

In superstring theory, which is considered to be the "theory of everything", all the elementary particles are represented as various oscillation modes of very tiny strings. Among those oscillation modes, there is one that corresponds to a particle that mediates gravity, and thus the general theory of relativity can be naturally extended to the scale of elementary particles. Therefore, it is expected that superstring theory allows the investigation of the birth of the universe. However, actual calculation has been intractable because the interaction between strings is strong, so all investigation thus far has been restricted to discussing various models or scenarios. Read more at: http://phys.org/news/2011-12-year-old-puzzle-superstring-theory-supercomputer.html#jCp


String Theorists Simulate the Big Bang   Live Science - December 14, 2011
Japanese physicists have created a string theory model that simulates the birth of the universe. In their model, the Big Bang was a "symmetry-breaking event" - a fluctuation that caused three spatial dimensions to break free from the other six dimensions of string theory, then rapidly unfurl to produce our universe's observed 3D structure. String theory - a proposed "theory of everything" that unites quantum mechanics and general relativity together in one complete picture - models elementary particles as oscillating lines ("strings") rather than dimensionless points. In order for the math to work, string theory requires that there be 10 dimensions: nine of space and one of time. Our universe only appears to have three spatial dimensions, string theorists say, because the other six are curled up in undetectably tiny bundles called Calabi-Yau manifolds, which are a minuscule 10^-33 centimeters across.


Physicists use offshoot of string theory to describe puzzling behavior of superconductors   PhysOrg - August 9, 2010
Physicists are divided on whether string theory is a viable theory of everything, but many agree that it offers a new way to look at physical phenomena that have otherwise proven difficult to describe. In the past decade, physicists have used string theory to build a connection between quantum and gravitational mechanics, known as gauge/gravity duality.