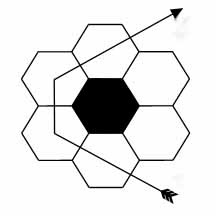 The Slingshot Effect refers to something that bounces back. Everything returns to its source as some time. We have gone as far as we can go in this Consciousness Hologram and are about to bounce back to our point of origin.

In orbital mechanics and aerospace engineering, a gravitational slingshot, gravity assist maneuver, or swing-by is the use of the relative movement and gravity of a planet or other celestial body to alter the path and speed of a spacecraft, typically in order to save propellant, time, and expense. Gravity assistance can be used to accelerate, decelerate and/or re-direct the path of a spacecraft.

The "assist" is provided by the motion (orbital angular momentum) of the gravitating body as it pulls on the spacecraft. The technique was first proposed as a mid-course maneuvre in 1961, and used by interplanetary probes from Mariner 10 onwards, including the two Voyager probes' notable fly-bys of Jupiter and Saturn.

In orbital mechanics and aerospace engineering, a gravitational slingshot or 'gravity assist' is the use of the gravity of a planet to alter the path and speed of an interplanetary spacecraft. The slingshot effect is used to accelerate a spacecraft in a planetary flyby. NASA calls this a gravity assist, and exploits it to save fuel in missions to outer planets such as Jupiter and Saturn.The planets continue in their orbits unaffected, and so at first sight this seems like something for nothing, a cosmic perpetual-motion trick. But the physics is straightforward, resting only on conservation of momentum and of energy -- and involving the huge mass ratio between planet and spacecraft.

The Slingshot effect, also known as the Light-speed breakaway factor, is a method of time travel that requires a starship to travel at warp speed towards a star. As the ship approaches the star, it begins to travel back in time, using the gravitational field of the star, then breaking free the starship is sent forwards or backwards in time. It requires very precise calculations - variables include availability of fuel components and vessel mass through a time continuum.

This method was used by Captain Kirk and his crew of the USS Enterprise at least twice to return to 23rd century after being hurtled back in time to 20th century Earth. (TOS: "Tomorrow is Yesterday", "Assignment: Earth") Kirk and his crew applied the slingshot effect again in 2286, using a hijacked Klingon Bird-of-Prey to travel back to Earth in the latter half of the 20th century, although this subsequently drained the Bird-of-Prey of most of its power. There, they retrieved two humpback whales and brought them back to their own time so they could respond to an alien probe that was threatening Earth in the 23rd century. (Star Trek IV: The Voyage Home)