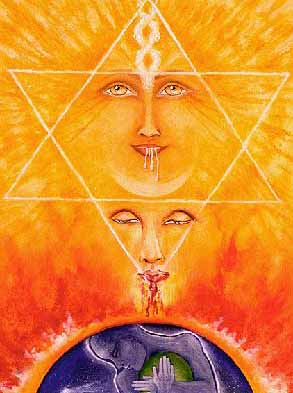 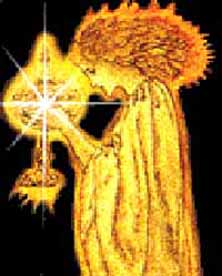 Shekinah is the English spelling of a grammatically feminine Hebrew word that means the dwelling or settling, and is used to denote the dwelling or settling divine presence of God, especially in the Temple in Jerusalem. The Shekinah is held by many to represent the feminine attributes of the presence of God. It is the shakti - female energy of Hindu gods. The nearest Christian concept to the Shekinah is that of the Holy Spirit. The Shekinah is referred to as manifest in the Tabernacle and the Temple in Jerusalem throughout Rabbinic literature. Read more ... 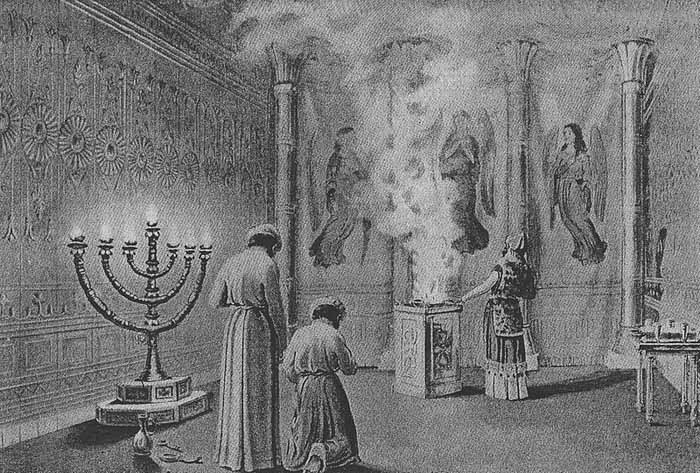 Judaism is a monotheistic religion, strongly connected to a patriarchal God -Yahweh. It may surprise many people to discover that a goddess was associated with Judaism from its conception, and continued to play an important part, in various forms, to the present. The goddess is best known as Shekhina, a Talmudic term describing the manifestation of God's presence on earth.

While the Bible does not mention the name Shekhina, she is nevertheless bound to extremely old traditions, and closely relates to the ancient goddesses. Particularly significant is the Canaanite goddess Ashera who, at the beginning of the Israelites' settlement in the land of Canaan, was often referred to as Yahweh's Consort.

The literature also calls her the "Holy Spirit" which, in Hebrew, is also a feminine form. The feminine nature of the Shekhina is so easy to establish in Hebrew, because the gender of the subject plays an important role in the sentence structure.

In English, you can say "The Glorious Shekhina returned to bless us" without mentioning gender.

In Hebrew, both verbs and adjectives have a male or female forms, and many names suggest gender to anyone who understands the language. The simple sentence above indicates three times that the Shekhina is female, and the fact sinks easily into the consciousness of the reader.

From the first covenant, Yahweh presented an image of a harsh, daunting God. His character almost demanded the birth of an entity like Shekhina. Also, He could not be seen by human eyes, and only a few prophets heard His voice. Yet almost every religion shows that human nature seeks intimacy with a deity.

The manifestation of a loving maternal entity, ready to defend her people even from God Himself, brings a feeling of comfort that a paternal, invisible entity like Yahweh cannot bestow upon His worshipers.

Shekhina represented compassion in its purest form, and despite being, officially, the female side of God, she was visible and audible as a feminine entity in her own right. 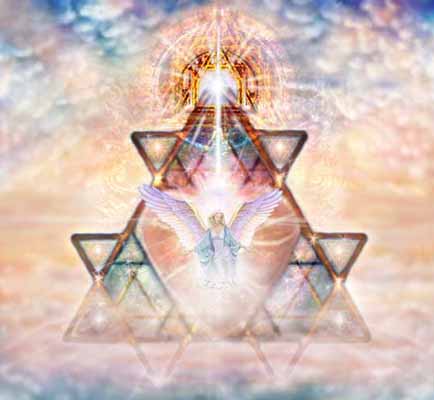 A beautiful being of light, whose most important function was to intercede with God on behalf of her children. Such an entity had to come into being to soften the harshness of the original Judaism.

But how did such a complex entity develop? It started with the changing of God's dwelling. During Biblical times, people assumed God dwelled in the clouds. When the Israelites built the desert Tabernacle, and later, Solomon's Temple, Yahweh descended in a cloud and dwelt there.

The word Shekhina, in Hebrew, is derived from the Biblical verb shakhan, meaning "the act of dwelling" but taking the feminine form. Therefore, at the beginning of the Talmudic era, the word Shekhina meant the aspect of God that dwelt among people and could be apprehended by the senses.

Slowly, the manifested entity became stronger. A complete distinction appears in a Talmudic quotation from the end of the 1st century BCE: "...while the Children of Israel were still in Egypt, the Holy One, blessed be He, stipulated that He would liberate them from Egypt only in order that they built him a Sanctuary so that He can let His Shekhina dwell among them... As soon as the Tabernacle was erected, the Shekhina descended and dwelt among them."

Another tradition claimed that she had always dwelt among her people, but their sins drove her, on and off, into Heaven. However, she was drawn back to her children and tried to save them, over and over. By that time, her image was so ingrained into real historical events, that when the Jews were exiled to Babylonia, she transferred her seat there, and appeared alternately in two major synagogues.

She often made herself visible to the congregations there, particularly in one synagogue, which was built of stones and dust taken from a holy place in Jerusalem.

As the Jews dispersed further, sightings occurred in Italy, Spain, Germany, Poland, Russia - in every town where Jews lived. Shekhina comforted the sick, the poor, the suffering, and had a particular concern for repentant sinners "These are accepted by the Shekhina as if they were righteous and pious persons who never sinned.

They are carried aloft and seated next to the Shekhina...he whose heart is broken and whose spirit is low, and whose mouth rarely utters a word, the Shekhina walks with him every day...".

The paradox of dwelling in one place, and being in various places and with many people at the same time, had to be resolved. The Talmud reconciled the two ideas beautifully in a well-known anecdote. "The Emperor said to Raban Gamaliel: ÔYou say that wherever ten men are assembled, the Shekhina dwells among them.

As time went by, her position strengthened.

An interesting Medieval anecdote shows the Shekhina as a total separate entity, in her most important role - interceding on behalf of her children.

"The Shekhina comes to the defense of sinful Israel by saying first to Israel: 'Be not a witness against thy neighbor without a cause' and then thereafter saying to God: 'Say not: I will do to him as he hath done to me..' "

This is obviously a conversation taking place among three distinct entities - Israel, God, and the Shekhina.

Another significant passage from the 11th century, describes Rabbi Akiva (a second century sage) saying: "When the Holy One, blessed be He, considered the deeds of the generation of Enoch and that they were spoiled and evil, He removed Himself and His Shekhina from their midst and ascended into the heights with blasts of trumpets..."

When she behaved violently, her character came closer to her powerful aspect of the great Asherah, Yahweh's Canaanite Consort.

She descended to Earth to punish Adam, Eve, and the Serpent when they sinned at the Garden of Eden.

She confused the builders of the Tower of Babel.

She drowned the Egyptians at the Red Sea crossing during Exodus.

When needed, she even killed righteous people. Since the beginning of time, six people - Abraham, Isaac, Jacob, Moses, Aaron, and Miriam -- could not be taken by the Angel of Death because of their perfect purity.

Someone had to bring their souls to Heaven, and only Shekhina could do that. By kissing them, she released their souls from bondage to this world.

In a particularly touching story, after kissing and releasing Moses' soul, she carried his body for a long distance on her wings, to his secret grave.

This myth connects Shekhina to another ancient goddess, Anath.

According to the legends, Moses had to live apart from his wife so that he would always be pure enough to communicate with the Shekhina. This gave rise to the curious myth, later elaborated on in the Kabbalah, that Moses and Shekhina lived as husband and wife.

Nor is this the end of her development.

The Kabbalah greatly elaborated on the theme of the feminine aspect of God. She would appear as the powerful Matronit, the controversial Lilith, and finally, as the glorious figure of Shabbat Hamalka - Queen, Bride of God, celebrated every Saturday by Jews all over the world as they light the Sabbath candles.

And by tradition, the candles must always be lit by a woman.

Naturally - Ashera, too, was served chiefly by priestesses.

The cycle is complete.