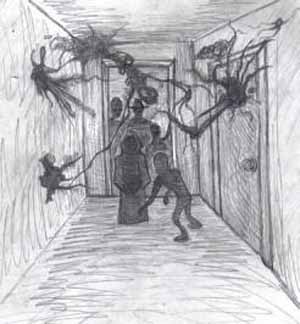 Sometimes we see an entity in the periphery of our field of vision. In the duality of our reality, these entities can be positive or negative. They may look like a spark of light, (a soul spark and our true essence,) most often viewed as white light moving between grid realities.

On occasion one sees a dark form, or forms, referred to as Shadow People. This is about consciousness momentarily moving between the grids that create our reality. There are many grid experiences simultaneously interacting with our own. Sometimes we get a glimpse into another, if only for a nanosecond. Some people are more aware, while others just move on.

Shadow people (also known as Shadow men, shadow folk, or shadow beings) are said to be shadow like creatures of supernatural origin that appear as dark forms in the peripheries of people's vision and disintegrate, or move between walls, when noticed.

Reports of shadow people are similar to ghost sightings, but differ in that shadow people are not reported as having human features, wearing modern/period clothing, or attempting to communicate. Witnesses also do not report the same feelings of being in the presence of something that 'was once human'. Some individuals have described being menaced, chased, or (more rarely) attacked by shadow people. There have also been reports of shadow people appearing in front of witnesses or lingering for several seconds before disappearing. Witnesses report that encounters are typically accompanied by a feeling of dread.

Most accounts of shadow people describe them as black humanoid silhouettes with no discernible mouths, noses, eyes, or any expression whatsoever, though purported witnesses have also described child-sized humanoids or shapeless masses. Some reports also include glowing red eyes.

Generally, they are described as lacking mass, though their specific nature varies from a two-dimensional shadow to a vaporous or distorted three-dimensional form. Their movement is often described as being very quick and disjointed; they may first move slowly, as if they were passing through a heavy liquid, and then rapidly "hop" to another part of a witness' surroundings.

Some witnesses describe this movement as though the shadow entities they have seen "danced" from one wall to the next, or as moving around the room "as if they were on a specific track".

Some accounts differ from the above and instead describe a completely black creature with red eyes, a cloak, and a gentleman's hat. This variation has become known as "the hat man".

Various depictions and artists rendering have been posted on the internet.

Several explanations have been proposed to explain the phenomenon of shadow people.

Explanations for shadow people have been drawn from the fields of parapsychology, metaphysics, cryptozoology, demonology, religion, and the occult:

Several non-paranormal hypothesis for the phenomena of shadow people exist, including optical illusions or hallucinations brought on by the physiological/psychological circumstances of the witnesses.

In most instances, witnesses report seeing shadow people in the peripheral areas of their vision. This areas of vision is linked to the areas of the brain that recognizes patterns, however it provides less detail to the brain than macular (center-forward) vision. This can lead to a condition know as pareidolia, in which the brain incorrectly interprets random patterns of light/shadow or texture as being familiar patterns such as faces and human forms.

The same condition can also be observed in macular vision in low light conditions, or when viewing a complex but random image. A common example would be perceiving a shadow, thrown by an item of furniture in a darkened room, as being a person.

Also known as waking-sleep, hypnogogia is a documented physiological condition in which a person is part-way between sleeping and waking. During hypnogogia, a person can be conscious and aware of their environment, but also in a dream-like state where they can perceive images from their subconscious. People experiencing waking-sleep commonly report the sensation of lights or shadows moving around them, as well as other visual hallucinations. A feeling of dread is also a sensation that occurs when experiencing hypnogogia. Hypnogogia is sometimes known as 'the faces in the dark phenomenon' because sufferers commonly report seeing faces while experiencing waking-sleep. Similar hypothesis have been put forward linking this condition to a number of other apparent paranormal experiences, including alien abductions and paranormal nocturnal visitations.

The use of narcotics and psychotropic agents, including methamphetamine and LSD, can produce shadow person-like hallucinations. Dopaminergic drugs such as pramipexole can sometimes cause these hallucinations. Common over-the-counter medication can also have a similar effect if taken in sufficient quantity

Under the right conditions, electromagnetic fields can interfere with the functions of the temporal lobe; creating altered states of perception in which auditory and visual hallucinations can occur.

Using electromagnetic fields, researches have been able to recreate many of the experiences reported during paranormal encounters under laboratory conditions, including those of shadow people. Researchers have also documented correlations between variances in naturally-occurring magnetic fields and areas where paranormal events have been reported.

Certain neurological conditions, such as photosensitive complex partial seizures, have also been shown to cause sufferers to see shadow people. Shadow People