September 19th is the anniversary of three famous UFO cases in
three different decades. All of these encounters are significant in
UFO history and are considered to also be among the best documented. 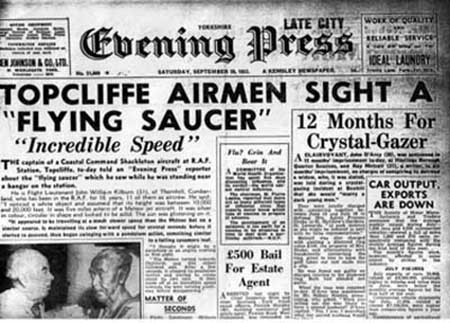 At 11am a silver disc-shaped object followed a Gloster Meteor returning to RAF Topcliffe seen by observers on the ground. It rotated while hovering. It then traveled towards the west at high speed. On September 21, six RAF planes followed a spherical object over the North Sea. It followed one of the planes back to the base. 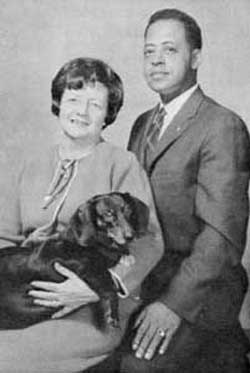 Betty and Barney Hill were an American married couple who rose to fame after they claimed to have been abducted by extraterrestrials on September 19-20, 1961. The couple's story, called the Hill Abduction, and occasionally the Zeta Reticuli Incident, was that they had been kidnapped for a short time by aliens. Theirs was the first widely-publicized claim of alien abduction, adapted into the best-selling 1966 book The Interrupted Journey and a television movie. 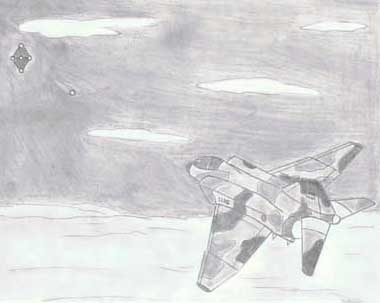 The 1976 Tehran UFO Incident was a radar and visual sighting of an unidentified flying object (UFO) over Tehran, the capital of Iran, during the early morning hours of 19 September 1976. The incident is particularly notable for the electromagnetic interference effects observed upon aircraft coming within close proximity to the object: two F-4 Phantom II jet interceptors independently lost instrumentation and communications as they approached, only to have them restored upon withdrawal; one of the aircraft suffered temporary weapons systems failure, while preparing to open fire.

The incident, extensively recorded in a four-page U.S. Defense Intelligence Agency (DIA) report distributed to at least the White House, Secretary of State, Joint Chiefs of Staff, National Security Agency (NSA) and Central Intelligence Agency (CIA), remains one of the most well-documented military encounters with anomalous phenomena in history, and various senior Iranian military officers directly involved with the events have gone on public record stating their belief that the object was not of terrestrial origin.