The Maiden Voyage of the Queen Mary 2

Reality is about Passages - bridges of consciousness from one experience to another. Stories have passages that guide our journeys...

"Wake up! Wake up!" Z shouted in my head. There I was, soundly asleep, dreaming about the groaning sounds of Tibetan monks chanting.

I jumped up in bed! The clock radio read 6:15. Outside - I could hear the sounds of helicopters and fog horns [Tibetan chants? - An external stimulus causing a dream image?] - from boats passing under the Verrazano Bridge in the dense fog that was just beginning to lift.

I pulled up the bedroom shade and I put on the TV. A woman reporter, in a helicopter, was talking about about high security in New York Harbor and New Jersey.

I made a quick psychic scan and determined that terrorists had not attacked. Further - I do not see that happening in NYC again.

Z shouted, "Get your digital camera...The QM 2 is about to go under the bridge on its maiden voyage."

I though about the Queen Mary I - which is now a Ghost Ship and a trans-Atlantic journey I made in 1991 on the QE 2 - where I did psychic readings and gave lectures. It was fun to sit at the Captain's table and read people from 40 different countries.

7:00 - Ron called from Manhattan as he drove past the QM 2 docked at Pier 92 on the west side which is not far from Ground Zero.

All he could says was, "The ship is unbelievable!"

Traffic on the west side was not moving as people stopped to gawk at the QM 2 which is so enomorous it is longer than the dock. Smaller boats are off the stern protecting the ship so no other boats accidentally ram into it. There is an enormous amount of security everywhere. The top of the QM 2 is so high it can be seen above some of the taller buildings in the city."

The world's largest passenger liner, the Queen Mary 2, arrived in New York on Thursday, steaming up the Hudson River and docking for the first time against the backdrop of a hazy Manhattan skyline.

Laden with opulence, the QM2 arrived nearly on schedule just after 8 a.m. after making up time lost to fog and the residual effect of storms during the first 48 hours of its inaugural trans-Atlantic crossing, which began in Southampton, England, last Friday.

Onlookers watched from vantage points in Manhattan and New Jersey as the ship's arrival was marked by the customary Gotham greeting -- fireboats spouting red, white and blue water, hovering helicopters and an escort of tugs, police and Coast Guard cutters and even a fishing boat.

The Cunard Line's newest and biggest vessel even brought its own weather -- a London-like drizzle and fog which eased off just before the vessel passed under the Verazzano Narrows bridge, clearing it by less than 20 feet.

Its berth on Manhattan's West Side was a stone's throw from another British transportation icon, a Condorde supersonic jetliner acquired last year by the USS Intrepid Sea-Air-Space museum after the Concordes were retired.

Passengers stepped ashore raving about the trip and the QM2's amenities. "Until you go on the ship, you can't appreciate the grandeur of it. It exceeded my expectations," said Helen Smith, of Yorkshire, England, who mad/Users/elliecrystal/Desktop/Crystalinks/Verra Bridge Park/html/qm2.htmle the voyage with her two sisters after reading about the QM2.

She said she admired the chandeliers, a restaurant on three levels, the main staircase and Art Deco stylings reminiscent of 1930s ocean liners. All three sisters enjoyed onboard entertainment, computer and dance classes and an art auction, she said.

Mike Buckle, a retired engineer from Cambridge, England, wearing British and American flags in his blazer pocket, said his favorite feature was the ship's planetarium, with photography "as good as the Kennedy Space Center."

"We went to the planetarium, and there were 50-foot waves," Buckle said. "This ship just went through them, I didn't see anyone get sick."

The Queen Mary 2 completed its voyage 92 years and a week after another British liner, the RMS Titanic, almost but not quite made it to New York on its maiden voyage.

Though Commodore Ronald Warwick followed the same northerly track known as the Great Circle Route, the Queen Mary 2, fitted with radar and other modern navigation equipment, was never imperiled by icebergs such as that which sank the Titanic with 1,503 dead on April 15, 1912.

But the rough weather - with 30-foot seas and force 10 gales gusting to 63 mph -- gave the passengers some nights to remember. According to accounts published by reporters on board, many passengers stayed in their quarters rather than go to the dining rooms.

The ship arrived under extra-tight security that has been in effect for all major events in New York since the terrorist attacks of Sept. 11, 2001.

Emerging ghostlike from an early morning fog, the QM2 paused near the Statue of Liberty and sounded its deep-throated horn four times in salute. A passing Staten Island ferry tooted back.

Nearly four football fields long at 1,132 feet and 21 stories tall, the massive, black-hulled vessel left England last Friday for the six days and nights of luxury living and sumptuous dining for its 2,600 passengers, attended by a crew of 1,250.

After three days in port on Manhattan's West Side, the QM2 will depart on Sunday night, again pausing at the Statue of Liberty with the Queen Elizabeth 2, outbound on its own last trans-Atlantic run.

The two Queens, old and new, will travel home in tandem -- the first time two Cunarders sail the Atlantic together instead of passing each other in mid-ocean, officials said.

The Queen Mary 2, successor to the QE2 on Cunard's Atlantic run, revives the name of a liner that plied the route a half-century earlier. The first Queen Mary, slightly more than half the size of the new one, debuted in New York on June 1, 1936.

During World War II, the Queen Mary and its sister ship, Queen Elizabeth, became gray-painted troopships, fast enough to outrun enemy U-boats. Winston Churchill later credited them with having shortened the war by a year.

The Queen Mary was retired in 1967 and sold to private investors who turned it into a seaside tourist attraction in Long Beach, Calif.

In the realm of seagoing behemoths, the QM2 is the world's biggest passenger ship in every way, its closest rival being the 142,000-ton Voyager Of The Seas, in service since 1999 with Royal Caribbean Cruises. But it's a virtual rowboat next to the largest of all ships - a 564,700-ton supertanker built in 1979 as the Seawise Giant, and now called Jahre Viking.

The first pure ocean liner built in 35 years, the QM2 is three times the size of the Titanic, which at 46,300 tons and 800 feet was called the "largest movable object built by man" when launched in 1911.

While radar and other state-of-the-art technologies help to tame the turbulent North Atlantic, QM2's designers acknowledged the ghost of that "unsinkable" vessel, using "extra thick steel for strength for trans-Atlantic crossings," and two whistles audible at 10 miles -- one of them borrowed from the original Queen Mary, according to Cunard.

The Queen Mary 2 paid a previous visit to U.S. shores last January, ending a 14-day cruise through the Azores and Caribbean at Fort Lauderdale, Fla. The ship goes into regular trans-Atlantic service with 12 crossings scheduled this year and 26 next year.

Another moment in history at my doorstep...

I got my digital camera and ran onto my terrace where I took the following pictures as the QM2 passed under the Verrazano Bridge. Z was watching on the other side of the bridge. I could hear a man on the ship describing the scenary and the history connected to this passage - and passing the Statue of Liberty in another minute....

It's all a sacred journey...cycles repeating in fractals of time. 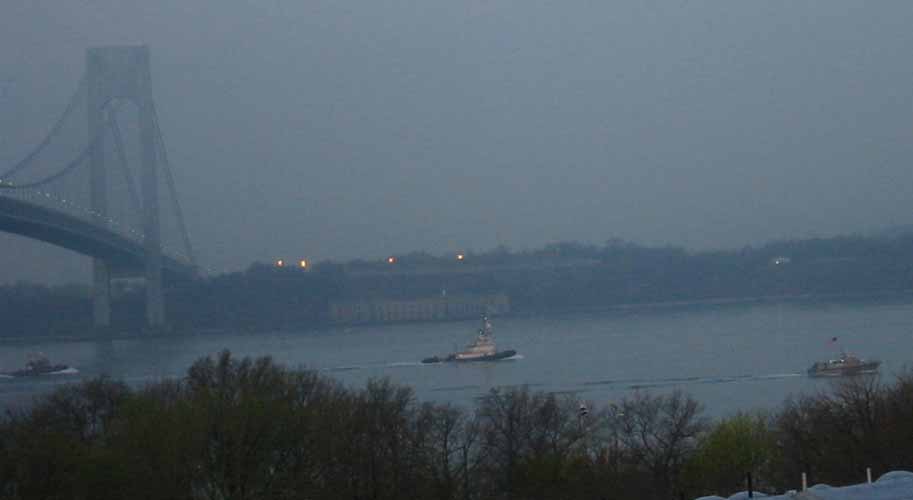 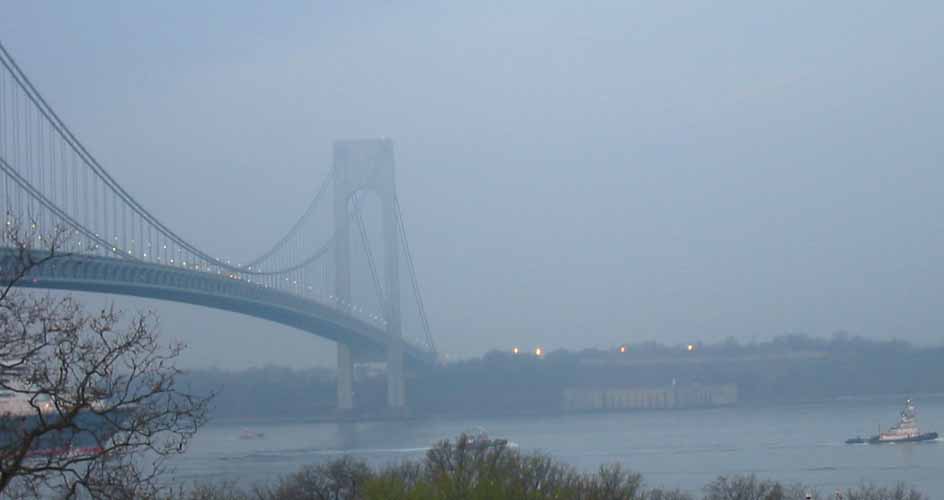 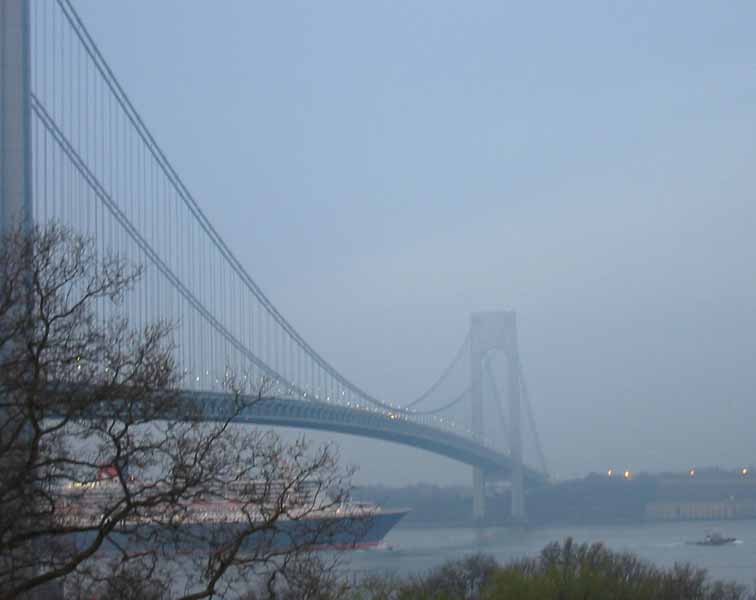 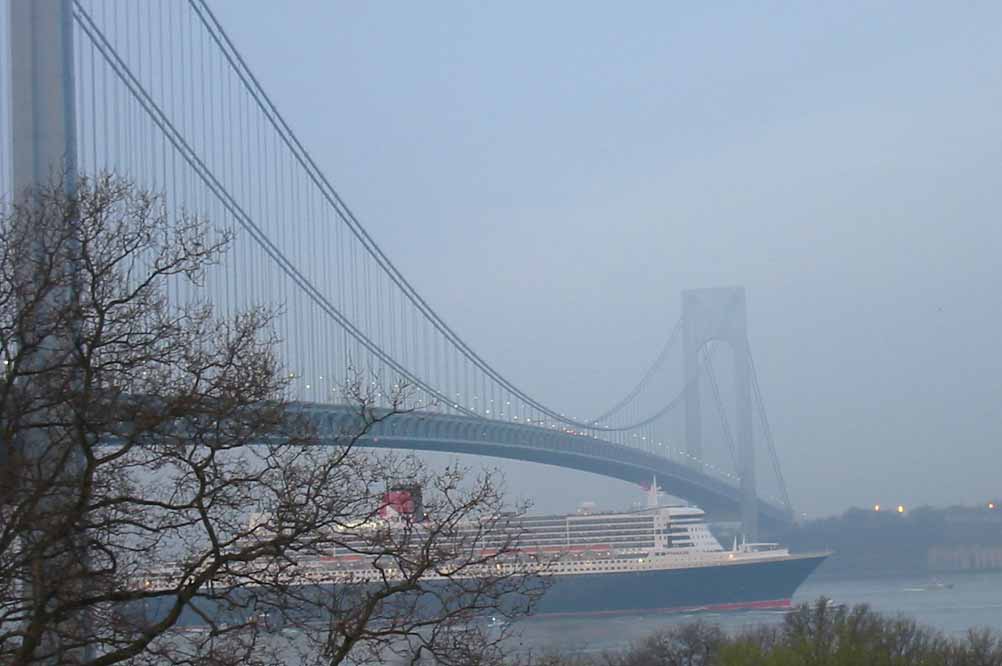 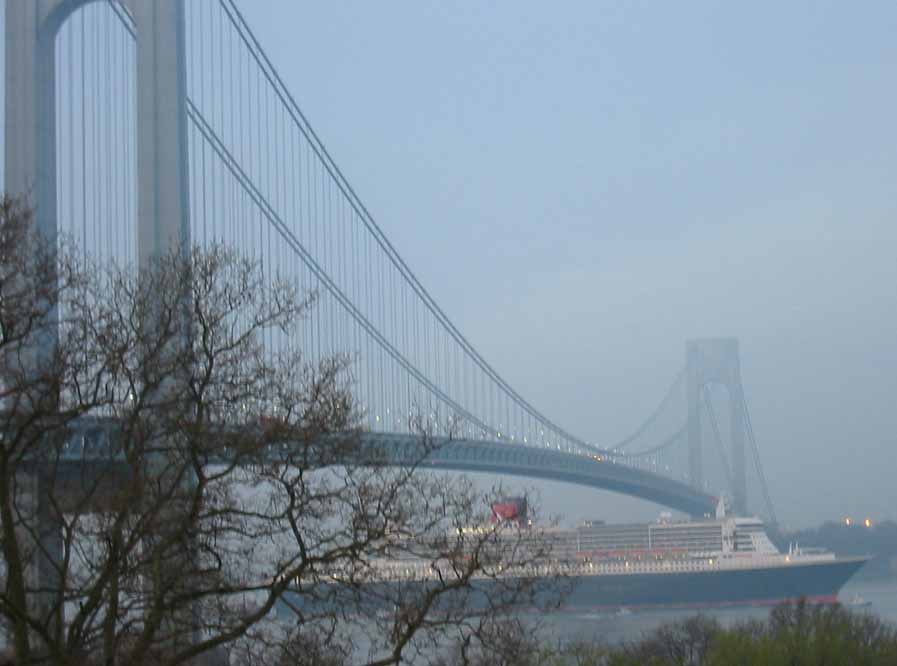 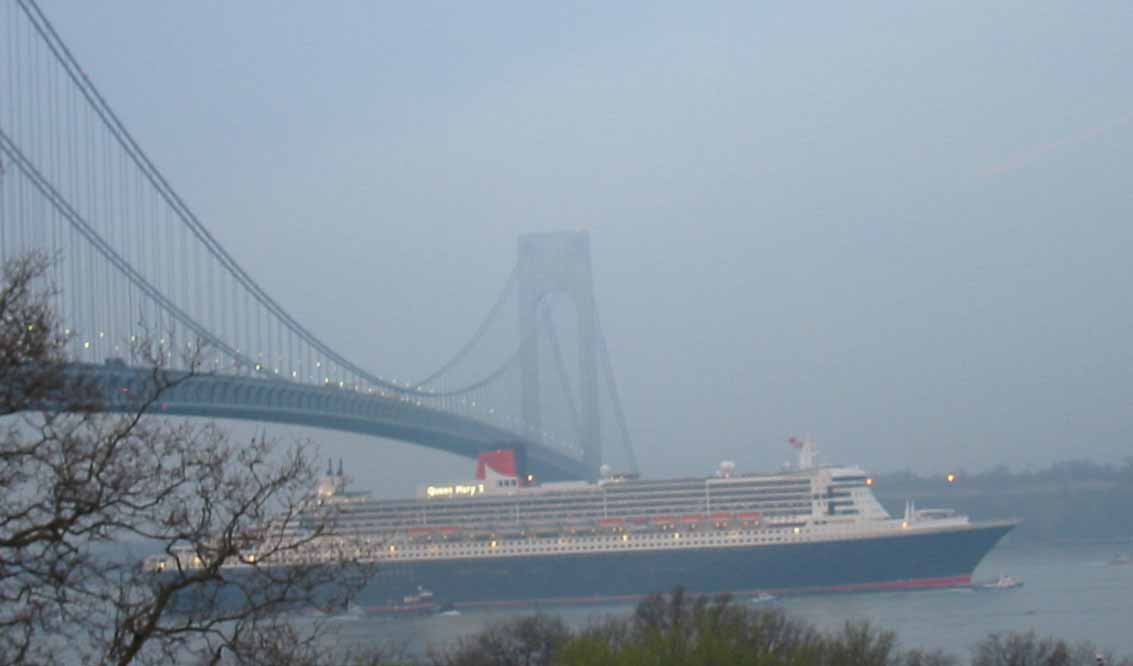 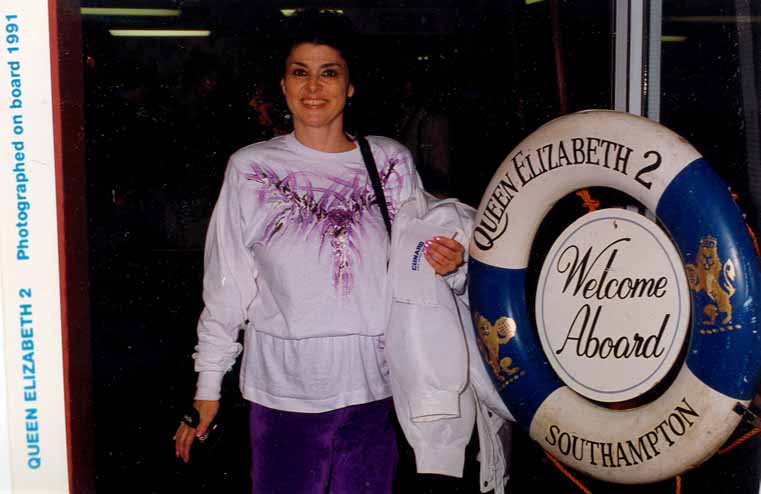