Pyramids in the Sudan

On the way from Khartoum to Port Sudan, about 200 km north-east of Khartoum, near Bagrawiya, lies ancient Meroe, the home of a few dozens pyramids spread over a small hill about one quarter square kilometer in size. The pyramids, much smaller than their well-known counterparts in Egypt, are the remains of a royal cemetery from the Meroitic kingdom (between 300 B.C. and 300 A.D.). 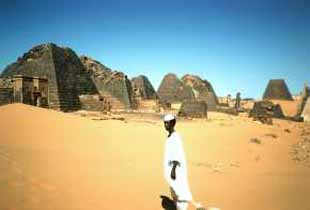 The region of the Nile Valley which lies in the northern part of the present Sudan, has been influenced by the Egyptian civilization since the time of the Ancient Egyptian Kingdom. This influence grew stronger during the occupation by Egypt in the period of the Middle Kingdom and reached its summit after the Egyptians conquered the whole region up to the 4th Nile Cataract. The Egyptian colonization lasted for almost five centuries and came to an end when in the twelfth century B.C. the Egyptian Empire fell into pieces.

Four hundred years later it were the kings of Napata in northern Sudan who ruled the Nile Valley from the Blue Nile down to the Delta. They revived the burial customs of the pyramid many centuries after the Pharaos had stopped building them and employed Egyptian artists in their architectural works. While the Napatan kingdom had to give up Egypt in 661 B.C. and subsequently the Egyptian influence started to decline, the burial traditions still survived and, after the the transfer of the kingship to the Meroitic line in the third century B.C., were taken over by the kings of Meroe - The Kushite Kingdom. 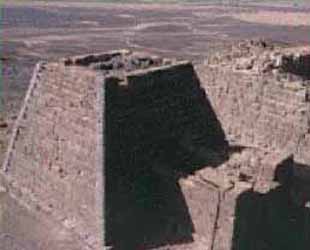 As with many of the pyramids around the world, changing ecological conditions - weathering, winds and dust storms over the millennia have caused great damage to the one beautiful monuments.

Many of the pyramids have hieroglyphic inscriptions 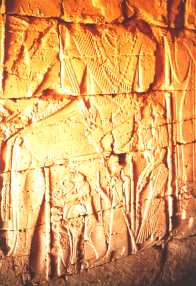