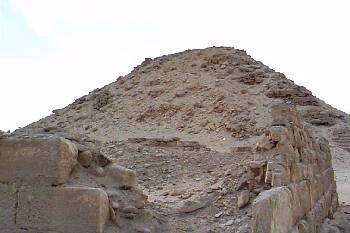 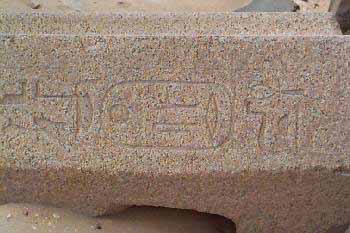 Niusserre took the causeway and the valley temple of the neighboring pyramid of Neferirkare and used it as a part of his own burial site.

The sanctuary consisted of an entrance hall that was leading to a court of 100x75 m / 330x250 ft. in size which was surrounded by a stone wall. In the middle of the courtyard stood a huge obelisk, a stone that looked like the modern-day Washington Monument. The obelisk was the cultic symbol for Re, the sun-god.

Niuserre had to compromise on his pyramid at Abusir. We believe it was the last of the royal pyramids built there.. Were he to have built his pyramid on the basic axis established at Abusir, it would have been located deep in the desert and its building costs would have been excessive. He chose therefore to build it almost against the north wall of Neferirkare's mortuary temple. In doing so, the pyramid, named "The (cult) places of Niuserre are enduring", was somewhat boxed in. Otherwise, the pyramid is fairly typical.

Few of the valley temples in Egypt remain because of their proximity to the Nile. Likewise, Niuserre's is almost gone. Its floor was originally around five meters below the present ground level and was probably built upon a foundation originally laid by Neferirkare, as was the causeway. It, like Sahure's valley temple, had two columned entrances. The west entrance had two colonnades with four pink granite columns in the shape of a six papyrus stems. They bear Niuserre's names and titles, along with representations of Upper and Lower Egypt (like those in the mortuary temple courtyard). This entrance led to a harbor ramp, and was paved with basalt. There was originally a granite dado, over which were decorations in polychrome reliefs. There was a four columned west portico, reached by an outside stairway.

In the middle of Niuserre's valley temple there were numerous statues at one time. These included statures of Niuserre himself in three niches on the west wall. However, there were also apparently statues of captive enemies, an alabaster head of Queen Reputnebu who we believe was his consort, and a pink granite statue of a lion. Only fragments of these statues have been discovered, and only fragments of the decorative reliefs on the temple walls remain. The wall reliefs would appear to be of Niuserre smiting his enemies, and of a goddess suckling the king.

The causeway between the valley temple and the mortuary temple has not been fully investigated, and there may still be inscribed blocks laying beneath the sand. Actually, part of the causeway lead to the mortuary temple and a lower section led to Neferirkare's pyramid. It was decorated in a very similar manner to Sahure's causeway. The causeway was originally built up to transverse the steep slope and uneven terran, but apparently the material used for this was usurped to build tombs for the priests who served Niuserre's cult during the 20th Dynasty.

The mortuary temple is rather small, and unlike others at Abusir, is shaped in the form of an L, though it is located on the eastern side of the pyramid as was customary. Here, the land descends slightly so in order to level the area out, the foundation surface was built up using rough masonry chambers filled with rubble and sand.

The outer walls of the temple complex were slightly inclined and bore a concave cornice. Just inside the entrance to the temple was a stairway to the roof terrace and a long, decorated, entrance corridor paved in basalt with a vaulted ceiling. There was a dado on the side wall made of pink granite. Only fragments of the walls remain. There were five storage annexes on either side of the entrance corridor.

The entrance corridor leads to a courtyard that was also paved in basalt and had sixteen six-stemmed papyrus columns made of pink granite. The column shafts have wavy lines in bas relief that give them a realistic quality. The middle of the column shafts are inscribed with the Niuserre's names and titles along with symbolic representations of Upper (vulture goddess Nekhbet) and Lower (cobra goddess Wadjet) Egypt. The ambulatory supported by the columns had an astronomical theme, decorated in stars. There was once an alabaster alter in the northwest corner of the courtyard, but only fragments of it have been found. It was decorated with offering scenes, depictions of the unification of Upper and Lower Egypt, along with other images.

A central corridor behind the courtyard separates the outer and inner parts of the temple. A niche in the northwest corner once housed a unique, pink granite statue of a recumbent lion meant to guard the inner part of the temple. Only fragments of the statue survive, and are located in the Egyptian Antiquities Museum.

Numerous fragments of reliefs were found within the inner part of the temple, but it is impossible to tell from which room they originally came. Some reveal Niuserre fighting enemies. Other scenes include the founding of the temple, offerings being delivered, and the sacrificing of animals.

Within the inner part of the temple was a chapel with five niches, but reconstructing the layout is very near impossible due the chapel's advanced state of destruction. The chapel was serviced by a cluster of storage annexes entered from the chapels northwest corner. From the chapel, a small, square, decorated chamber with a single central column and raised floor leads to the offering hall. This antechamber was repeated in later mortuary temples until the reign of Senusret I.

The offering hall is directly on the east-west axis of the temple complex just next to the pyramid, with an alter and false door for the deceased at its rear. The walls of the offering hall were decorated with ritual scenes related to Niuserre's death. The vaulted ceiling had astronomical decorations in colored, bas-relief. To the north is another cluster of storage annexes that served the offering hall.

One significant innovation of this mortuary temple were massive structures on the northeast and southeast corners. Here was found builder inscriptions and a reference to Sahure's sun temple, which has never been found. These tower like structures may have been a preview of the pylons built in later temples. The walls of these structures was slightly sloped and supported a concave cornice. Atop each was a terrace, arrived at via a narrow stairway.

The pyramid has a seven step core of local limestone. We estimate that it was originally 52 meters (173 feet) high, with a base length of 81 meters (270 feet). The outer mantle is made of fine white limestone and for stability, the corners of the pyramid are anchored to the foundation.

The entrance was in the middle of the north side at ground level. The entrance opens up to a corridor lined with fine white limestone and reinforced with pink granite at each end. This corridor was divided by a barrier with two granite plugging blocks. The corridor ascending to the vestibule. After the vestibule, the next corridor is larger then the first and turns somewhat east before arriving at the antechamber, after which is the burial chamber. There were no remains found of the king in his pyramid.

The burial chamber is located slightly beneath ground level and under the foundation stones. Both the antechamber and the burial chamber have a saddle ceiling, which was not uncommon at this time. This ceiling consists of three layers of huge limestone blocks set in place from above. Limestone fragments filled the area between each layer of the ceiling, helping shift the weight and stabilizing the structure, particularly during earthquakes. We believe that fragmentary scenes within the burial chamber describe military campaigns against Libyans.

About the pyramid is a limestone paved courtyard which is narrower on the south side (due to Neferirkare's mortuary temple) then on the north side. There is also a cult pyramid that Borchardt mistakenly described as a queens' pyramid.

It is entirely possible that we will never find Sahure's sun temple, because it may have been incorporated, or at least its blocks used in part to build Niuserre's pyramid complex. One clue to this is the builder's marks mentioned above that record the name of Sahure's sun temple. It is also possible that an obelisk once graced the Niuserre complex, of which we have some evidence suggesting that it might have belonged to Sahure's sun temple. While obelisks were obligatory in sun temples, they are unheard of in mortuary temples of this period.

As with most of the pyramids at Abusir, today the entrance to Niuserre's pyramid is blocked with rubble, and cannot be entered. 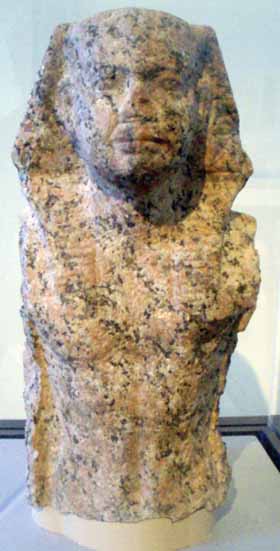