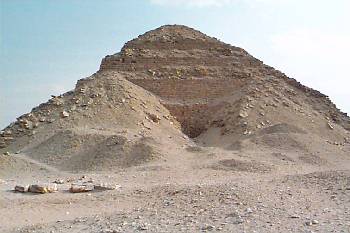 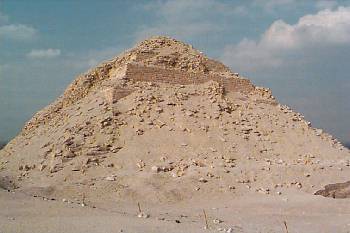 
Although the pyramid looks like an ant hill, it is said to be the best conserved pyramid in Abusir. It was the second pyramid that was built there. It is the highest of them all but has never been completed. Moreover, parts of the burial site were taken in possession by Niuserre. Papyri that were found in the mortuary temple could tell us about details of administration of the temple and everyday life. 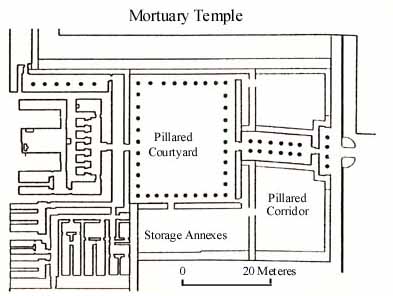 Neferirkare's pyramid at Abusir was the largest structure in the region, but was probably never finished. It was originally called "Kakai is a soul". Kakai is the throne name of Neferirkare. Perring initially investigated the structure during modern times, as did the Lepsius expedition a short time latter. Borchardt examined the pyramid and its mortuary temple in detail between 1904 and 1907. Because of the ruined condition exposing the core steps of Neferirkare' pyramid, Borchardt stated it presented an ideal setting in which to study the construction techniques used to build the pyramids and Lepsius based his theory of inclined accretion layers on his study of this pyramid. In more modern times, a Czech archaeological team also further investigated the pyramid's remains.

Strangely, the plans for this pyramid called for a step pyramid of six layers. The days of the step pyramids were long over, pyramids having evolved into the sleek cased structures already to be found on the Giza Plateau. However, as the original step casing reached the top of the first layer, for reasons we do not know, the architects decided to enlarge the structure and make it into a true pyramid. It was enlarged to eight core levels, and because it was a true core now to be covered by smooth casing, the blocks in the upper several levels are clearly not cut as finely as those on the lower levels. Yet the smooth casing was probably never completed.

There is a corridor, built of limestone, about two meters up on the north wall that leads to the burial chamber. This corridor descends into a vestibule located about two and one half meters below the base of the pyramid. Here, a granite barrier is encountered, but the corridor extends beyond making two turns, proceeding close to east until it empties into an offset antechamber. The roof of the corridor is unique, flat, but with a second gabled roof above the first and on top of it, a layer of reeds.

Both the burial chamber and its antechamber have cabled ceilings, are aligned generally east-west, and are of the same width, though the antechamber is a little shorter than the burial chamber. Both rooms are also mostly in ruined, having suffered the fate of many Egyptian monuments. Many of the blocks have been removed for building elsewhere.

Large wooden boats were buried outside the pyramid in its courtyard on the north and south sides. Archaeologists discovered them by their mention in a cache of papyrus found within the mortuary temple, but unfortunately, when the they excavated the southern boat pit, only dust remained of the boat itself.

The pyramid was built without a valley temple or causeway, and this certainly influenced the mortuary temple associated with the pyramid, which was built in stages and enlarged to accommodate storage and some functions of a valley temple. Actually, the oldest parts of the temple were probably built after the death of Neferirkare, by one of his successors. Evidence has been found that indicates that it was built on top of the site of an earlier structure. Located on the east side of the pyramid, the oldest, inner section of the temple is built of limestone on a small stone platform. It consisted of an offering hall, three annexes, one on the north side and two on the south, along with five niche chapels.

Few decorations remain, but one block showing the king, his consort Khentkaues II and their eldest son, Neferre, has been very useful in constructing the family lines during this period. It should be noted that the structure on the south side of Neferirkare's pyramid, built mostly of the discarded limestone of his pyramid, is probably the pyramid of Khentkaues II.

The rest of the temple was built later, gradually, mostly from mudbrick with a floor of packed clay, and without a solid foundation. The ground was leveled by using brick chambers filled with various rubble. The eastern part of the temple consisted of a four wooden columned portico, a columned entrance hall, and an open columned courtyard. The entrance hall had six pairs of wooden columns, all in the shape of four lotus stems. Within the courtyard are 37 lotus shaped wooden columns. There were probably at least 38 columns originally, but it is believed that one of these was destroyed by fire during antiquity. The southwest part of this extension consisted of storage rooms.

Surrounding the whole complex was a great mudbrick wall, though parts of it are barely distinguishable today. Also, because there was no valley temple built a simple settlement of mudbrick houses for priests was built south of the temple, which appears to have been occupied until the 6th Dynasty.