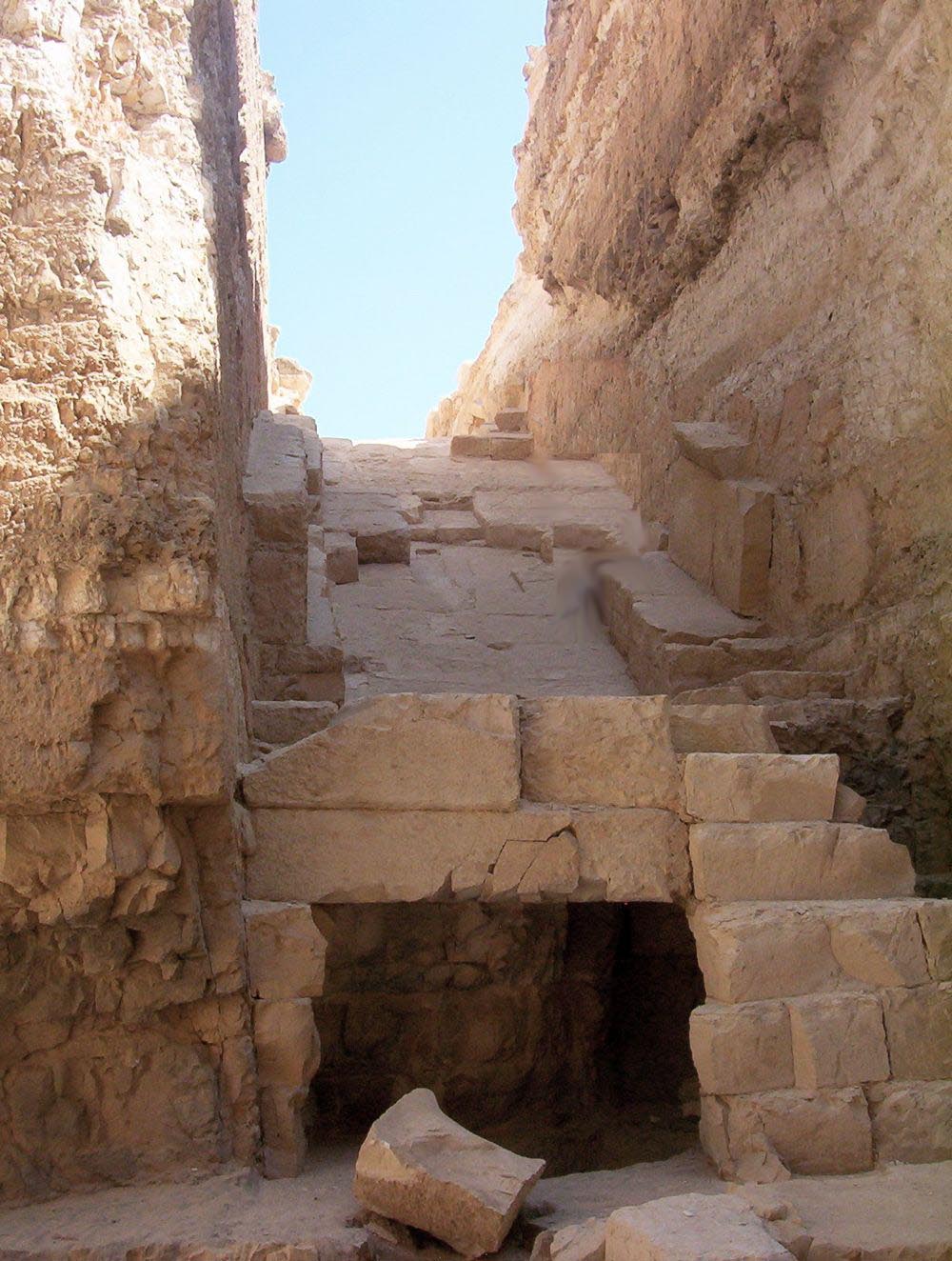 Djedefre, the 3rd ruler of Egypt's 4th Dynasty and the son of Khufu, for unknown reasons, abandoned the necropolis at Giza and built his pyramid at Abu Rawash. It was called "Djedefre's Starry Sky". This move is interesting, and it is often suggested that Djedefre had some sort of falling out with his family, or at least his brothers, for this location is an odd choice. His successor immediately returned to Giza. However, this conflict with his family is far from certain, and more recent evidence suggests that there were in fact no problems at all.

Other than the ruins of Lepsius pyramid number one, Djedefre's pyramid is the northernmost of any pyramid in Egypt. Before Lepsius, Perring briefly investigated the ruins, concentrating on the substructure, and Petrie later examined the pyramid in the 1880s. However, only at the beginning of the 20th Century was this pyramid systematically investigated, first by French archaeologist Emile Chassinat, and about then years later, by his fellow countryman Pierre Montet. Later still, it was further investigated by Maragioglio and Rinaldi. In 1995, the French-Swiss team headed by Michel Valloggia began excavation at the site, and perhaps this modern effort will answer questions about the pyramid and Djedefre that have long been left unanswered.

Unfortunately, this pyramid became a popular target for early stone thieves. It has been proven that, from the end of the 19th century, stone was being hauled away at the rate of three hundred camel loads a day. Previous findings have held that the pyramid was probably never completed, but it appears that the current excavators are now refuting this claim. 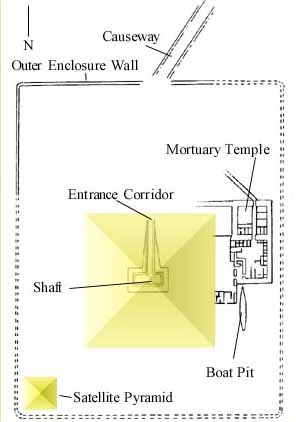 We know nothing of a valley temple that might have been connected with this pyramid, and very little about the causeway leading to the pyramid complex. The Causeway was probably very long. It would have had to be about 1700 meters (5,577 ft) to have reached the pyramid complex from the valley. The causeway was very unusual for this period as well, because it run north-south at a time when most causeways ran east-west.

The complex is surrounded by an outer perimeter wall that is approximately two and one half meters thick. It is somewhat oriented to the north-sough, with the causeway approaching from the north. Interestingly, in the area within the perimeter wall to the north, where the causeway leads in, is a large open space. This is the area where there should have been a mortuary temple if the causeway connected to this temple as in others, but no remains have been discovered.

The problem is that until the end of the 3rd Dynasty, mortuary temples were erected on the north side of pyramids, but beginning with the 4th Dynasty onward, they were located at the foot of the east side of the pyramid. If indeed there was a mortuary temple on the north, unexplored area of the complex, then this would have been a reversion back to earlier layouts. However, it should also be noted that the corridors and burial chamber of the pyramid itself, below, rather than in the superstructure, was also a reversion, and while the roofs of this substructure is highly damaged, it appears that the design may be similar to the earlier style of Djoser's Step Pyramid at Saqqara. 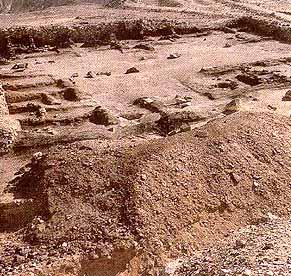 There may yet be discoveries made on the north side of the pyramid. However, recent excavations have also unearthed an inner perimeter wall about six meters (20 ft) from the north pyramid base, and widening on the east, where a mudbrick structure is thought to be what remains of a mortuary temple. A covered corridor is believed to have lead from the northeast entrance of the inner enclosure to the mouth of the causeway. Just outside of this corridor, recent excavations have revealed a cache of votive pottery, which indicate the existence of sustained cult worship of this King.

The layout of this "mortuary temple" on the east side of the pyramid is very different than other known Old Kingdom examples, and was apparently completed in haste. It was formed of rather thick fieldstone walls, finished with mudbrick to form the compartments and chambers surrounding an open courtyard. In the courtyard, some of the original pavement, storehouses and other architectural elements remain today. In the middle of the northeastern part of the structure stood a row of columns, apparently inscribed with Djedefre's cartouche, if fragmentary evidence may be believed. This is interesting, because other than some columns and half columns found at the complex of Djoser at Saqqara, this would represent the only appearance of columns in a pyramid complex mortuary temple prior to the 5th Dynasty.

There is a depression in the middle of the east wall of the pyramid core. Due to the location, Egyptologists believe that this was a niche that might have held a false door, in front of which would have been an altar, all a part of an offering hall. 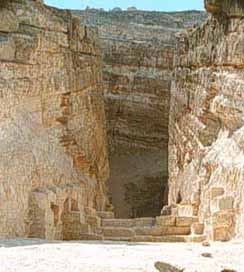 In the area near the columns, fragments of statues of three of Djedefre's sons and two of his daughters were discovered, along with a possible limestone sphinx. If this was indeed a sphinx, it would probably be the earliest know form of this statuary.

Like a number of pyramids in Egypt, this one used part of a rock outcropping that was reshaped as part of the core. The remainder of the core consists of local limestone blocks. There remains about fifteen horizontally laid layers of the limestone core, but very little of the fine, pink granite casing is left.

Originally, because of the slope of the casing blocks, it was thought that the pyramid had an extremely sharp slope. Some even believe it might have been planned as a step pyramid, as these structures had a much sharper slope than true pyramids. But with the newest investigation, it has been determined that the casing blocks were not laid horizontally, but leaned slightly towards the middle of the pyramid creating, instead of a 60 degree angle, a more standard 48 to 52 degree slope. This method was also used in the Step and Bent pyramids.Given that the baseline has been accurately determined to be 106.2 meters (348 ft), the pyramid would have risen to a theoretical height of between 57 and 67 meters (187 ft to 220 ft), much smaller than Djedefre's father's pyramid at Giza.

Though the substructure was highly damaged, we can see that the builders used the open pit method of construction, which was also a throwback to earlier times. In the north wall of the pyramid, they built a trench that now contains the remains of a descending corridor. Here, Valloggia found a copper ax blade within a part of a foundation deposit buried there when construction on the pyramid was begun. The corridor generally follows a north-south axis, and leads to an area that probably contained two rooms, an antechamber and burial chamber. Petrie, in his investigation, discovered a fragment of what he though was part of a pink granite sarcophagus in this area.

On the east side of the pyramid within the enclosure wall is a trench that, because of its form in the shape of a boat, might have originally held a royal solar boat. However, no remains of a boat were found here. Rather the fragments of some 120 statues, mostly representing Kjedefre sitting on his throne, were discovered. Three more or less complete heads were found, including one now in the Louvre in Paris and one in the Egyptian Antiquity Museum in Cairo. The statues had been, it would seem, intentionally destroyed. This may have done by Khafre, his half brother and successor, who could have possibly murdered Djedefre as revenge. There is a possibility that Djedefre himself gained the throne by murdering his older half brother, Kauab. 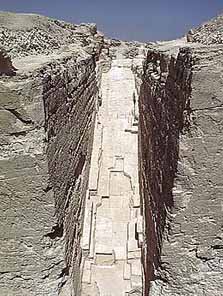 However, this theory has lost much ground lately. The view of a majority of scholars appears to be that, because the pyramid was located in an isolated area, the local population may have vandalized the statues. This theory hold that the destruction began during the New Kingdom, and became especially intense during the Roman and Christian era. At that time, a Coptic monastery was built in the nearby Wadi Karin.

Interestingly, no tombs of Djedefre's family and high officials have been found within the complex, though there is a structure near the southwest corner of the pyramid that might have served as a subsidiary tomb for one of his consorts. However, Egyptologists such as Stadelmann and Janosi think that this is in fact a cult pyramid without burial. Again, future excavations will be required to answer this question.

In the northeast corner of the inner enclosure, workshops and housing have been found that apparently were used by the builders of the pyramid. Here, layers of chips remain from what was apparently a stoneyard where the pyramid blocks were worked.

It should also be mentioned that Petrie found a fragment of a diorite statue with the probable hieroglyphs representing Menkaure. Some Egyptologists believe that this king undertook restoration work on the pyramid.

Today, only a heap of stones are left of Djedefre's pyramid. He intended to achieve that his granite-faced pyramid, located on a distant bank high above the Nile river, would shine like a huge crystal in the setting sun. 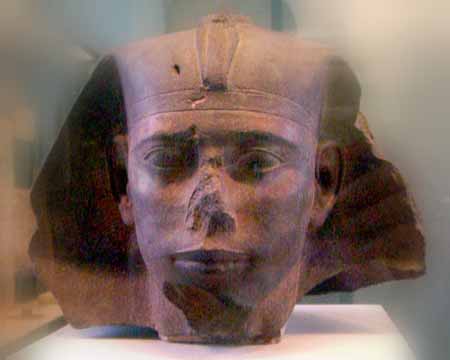