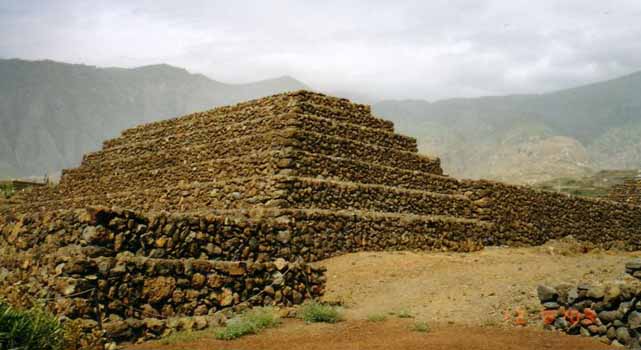 Six step pyramids were discovered in 1998 near Guimar, a town on the eastern shore of Tenerife Island, the Canary Islands. They are still a mystery to archaeologists. The Pyramids of Guimar include six step pyramids with a rectangular ground plan reaching a maximum height of about 12 metres. They have a noticeable similarity to the pyramids built by the Maya and Aztecs in Mexico. They are rubble-filled with facings of black volcanic stone and are the result of multiple episodes of construction.

The main complex of three pyramids were found to be astronomically orientated with the sunset of the summer solstice. Stairways ascend from a level plaza to the top of each pyramid, where there is a flat summit platform covered with gravel. The stairways are all on the west wall, suggesting a ceremonial purpose, because someone ascending them on the morning of the solstice would be directly facing the rising sun.

Spain's Canary Islands off the northwest coast of Africa hardly seem a place for pyramids, but there seem to be six of them on Tenerife. The inhabitants have generally ignored these dilapidated piles of black volcanic stones. However, one perceptive native described them to Thor Heyerdahl of Kon Tiki fame and a leading proponent of cultural diffusion across all oceans.

The Canary Islands had been part of the route Columbus took to the Americas. He stopped in Tenerife for provisions in 1492. The Guanches on Tenerife in 1492 did not permit Columbus or any other Europeans to land on their island. They were not impressed by the physical appearance of the bearded Europeans, who looked like the Guanches themselves. But when Columbus and the Europeans who followed in his wake landed in the New World they were welcomed and initially worshipped as gods, since the beardless Indians they encountered believed that the Spanish belonged to the same people as the legendary founders of their civilization, bearded men from across the Atlantic Ocean.

In 1991, famous researcher Thor Heyerdahl and others involved in the project were lead to believe that these pyramids may be remains from pre-European voyagers who sailed the Atlantic in ancient times, and may have possibly forged a link with the pre-Columbian civilizations of the Americas. They were neither terraces nor random piles of stone cleared by the Spaniards, as some had tried to explain them away. They were painstakingly built step-pyramids, constructed according to similar principles as those of Mexico, Peru, and ancient Mesopotamia.

Heyerdahl persuaded a Norwegian businessman to buy the site, clean up the debris of centuries and found a museum. One of the 'black' pyramids has now been restored, but some experts are still unconvinced. However, recent excavations under one pyramid have yielded artifacts identified with the Guanches, the pre-Spanish inhabitants of Tenerife.

The six pyramids in Tenerife are quite small, like training exercises for those in Central America. They are found near Guimar, a town on the eastern shore of Tenerife Island, about 40 kilometers (24 miles) south of Santa Cruz de Tenerife. Long dismissed by locals as mere piles of rubble, Norwegian explorer Thor Heyerdahl turned up and declared that they were indeed pyramids, not unlike those in Tucume, Peru that he had been studying.

Far from being piles of unworked rubble, every stone was turned with its flat side out and placed together by stone masons. With slopes of the volcano Mt. Teide at their back and facing the Atlantic, the edifices are precisely aligned according to the sunset on the summer solstice, as are other sacred structures in different parts of the world.

Carefully built stairways on the west side of each pyramid lead up to the summit, which is not a pile of stones, but a perfectly flat platform covered with gravel, as though for ceremonial performances and/or sun worship. The stones were not weather-worn, rounded boulders, such as farmers had found in the fields, but sharp fragments of lava, and some of the corner stones had been trimmed.

Archaeologists from the University of La Laguna were contracted to do test excavations of a ceremonial platform between two of the pyramids. As predicted by Dr. Heyerdahl, they found that rather than being a random pile of stones as they had expected, it was built of blocks, gravel and earth.

Skeptics had to admit that this was definitely some kind of ceremonial architecture. Yet some still refused to admit that such impressive structures could have been built by the Guanche, the original inhabitants of Tenerife, and suggested that they might have been constructed by the early Christian conquistadores as a time measuring device to know when to celebrate the Catholic festivities of St. John.

The Canary Islands are a popular solution to the location of Atlantis, based on their location west of the Mediterranean, and their mountainous terrain. They are part of a volcanic archipelago with marine trenches as deep as 3,000 metres and mountains as high as 3,718 meters above sea level.

Archaeological findings suggest that the original inhabitants were Berbers who arrived from north Africa around 200 B.C. However, some early navigators reported the Canarians as being a race of tall, blond-haired, blue-eyed people, perhaps suggesting northern European or Atlantean origins.