How Psychics Play the Odds and Still Lose 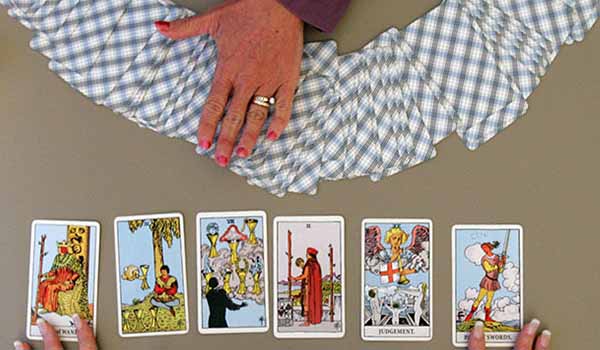 As a psychic I can tell you that most of what I "get" are "psychic messages" but there are always the elements of psychology and reality to be considered. A person can tell me that want love and marriage, when in truth they have no time nor energy for it, nor the karma to find "The One" - a fictitious person who will be there for them no matter what ... along with love, good communication, compassion, spiritual growth and great sex.

When it comes to finding a missing person, and I have helped solve many cases, some of which have been on TV. ....

The first thing a psychic has to do is determine whether the missing person is alive - meaning existing in physical reality. If you can do that, you go from there looking for clues to their whereabouts. Some psychics are better at it than others. You just have to connect the "frequency signature" of the missing person to yours. You can also connect with their consciousness grid - a form of remote viewing - and experience everything from their physical condition to what they see and hear. Anyone can learn to do this with practice.

Once determine that the person is alive - many psychics play the odds making the facts in the article below true. As to the way psychics connect with spirits as portrayed on TV or films ... it's not true. Spirits are projected illusion on their level of consciousness in the hologram of reality ... just as we are projections in physical reality.

Some psychic measure their results by hits and misses. I've never played that game. I go as guided and say what I see. I have always considered myself a "reality check" psychic. I was recently asked on a radio interview if the way I read people is different now than in past years. Everything changes along with consciousness - and a good psychic stays on top of their game by understanding reality shifts in consciousness and where it is all going. Today you have to understand why people are burning out and what their expectations are in today's world.

In 2010 I read Sylvia Browne and know many illustrious psychics. We each have own programmed agendas. Mine has always been about explaining the nature of reality as a simulation and where is it all going. Just ask the physicists. Time is an illusion. You can bet on those odds. Tick ... tock ... Reading with Ellie


In the aftermath of the recent rescue of three abducted girls held captive in a Cleveland home for years, one strange twist was revealed: The mother of one of the abducted girls, Amanda Berry, had asked prominent psychic Sylvia Browne whether her missing daughter was alive or not. Browne's response: "She's not alive." Of course Berry was indeed alive, and it's not the first time that Browne had told the families of missing children that their loved ones were dead when they were not.

But other psychics have made the opposite error, which can be just as devastating. For example in September 2012, Harsha Maddula, a Northwestern University student, went missing after leaving a party. Volunteers and police searched the area but were unable to find him. Some feared he'd been kidnapped or murdered, but Maddula's family said their fears were calmed when relatives consulted psychics who reassured them that he would soon be recovered safely. "He's still alive," the psychics told the family. "Don't worry." Maddula's body was found the next day in Wilmette Harbor not far from his dormitory. He had been dead for nearly a week, a victim of accidental drowning.

How Psychics Use Psychology

Psychics use several psychological techniques to give their visions and predictions the illusion of accuracy.

1) Psychics, like police detectives, know the odds. They know that if a missing person is not found within the first 48 hours, the chances of them being successfully recovered alive drop dramatically with each passing week. There are rare exceptions, of course, such as the long-term abductions of people like Jaycee Dugard, Amanda Berry, Elizabeth Smart and others. But saying that a child who has been missing for a year or more is probably dead is common sense, not psychic intuition. 2) Projecting confidence and authority. People tend to believe others when they appear completely confident and knowledgeable. Browne is the author of many books and has often appeared on television programs including The Montel Williams Show and Larry King Live, giving her added credibility. Even when Browne's clients occasionally contradict her and say that her information is wrong, she usually stands her ground and insists that she is correct.

3) Psychics offer a wide variety of random, vague and contradictory information. For example when a young Tennessee woman named Holly Bobo was abducted in April 2011, extensive searches by police and volunteers police found neither Bobo nor her abductor.

Hundreds of psychics offered information and leads, including that Bobo's abductor might have a scar on his forehead, or a rash on his elbow, or a bite mark on his hand. He might work from home as a graphic designer and long for the 1950s. His hair might be dark brown, or blonde or salt and pepper. He might be clean shaven, or he might have a mustache. He might be a Scorpio. He's either scrawny, or of medium build, or stocky and muscular - possibly ex-military. He might own a black leather wallet, and his name might contain one or more of the following letters: B, A, J, R, W, or M. His last name might be Glenn. Bobo might be near a place associated with the number 7, maybe an address or a highway number, or possibly 7 miles from some landmark.

It's not clear how police are supposed to use this jumble of random associations, images, numbers, letters and feelings provided by psychics. This information is so vague, general, and contradictory that it is completely useless; police need specific, accurate information. Precious time and resources were wasted following up on some of this information, and to this day neither police nor psychics have located Bobo or her abductor.

Of course if the missing person is found - usually by police, or by a jogger or hiker - some of this information, simply by random chance, may turn out to be correct. Thus psychics also play the odds by offering very vague claims, such as that a body will be found Ňnear water.Ó Statistically the majority of dead bodies are found near water of some sort: a ditch, a pond, a lake, a swamp, a sewer pipe, an ocean, a river, a water tower and so on. And, of course, ŇnearÓ is a relative term, and could be interpreted to mean any distance from inches to miles.

4) Psychics also rely on the public and journalists not bothering to fact-check their claims. Most high-profile psychics make exaggerated (or fabricated) claims about their successes, but a closer look reveals the truth. For example Allison DuBois - the inspiration for the TV show Medium - once claimed to have helped solve crimes for the Glendale Arizona Police Department and the Texas Rangers. However, both the police and the Texas Rangers denied having worked with DuBois.

5) Psychics exploit uncertainty. In most cases the information that psychics provide is unverifiable because the person is never found. The psychic could give police and the grieving family two completely contradictory accounts - say, for example, that a missing girl ran away and has started a happy new life in another city, or that she was killed and buried immediately after being taken - and unless the girl is found there's no way to know whether any of it is true.

It's also important to remember that these are vulnerable people; they're not seeking to find a missing heirloom or whether they will meet a dark, handsome stranger. They're asking about their missing loved ones, and have a deep personal investment in the information they receive. Even if they don't believe in psychics, the families are desperate for answers and will turn to anyone who seems to provide guidance.

Like gamblers - and anyone else who plays the odds - psychics are sometimes right about some of their predictions, especially when they are obvious and vague. In cases like Amanda Berry, however, it's crystal clear that they are completely, undeniably wrong. Psychics and their defenders claim that nobody is right all the time. And indeed that's true: everyone makes mistakes, and no one - not diagnosing doctors nor investors nor mechanics - can expect to be correct all the time.

The problem isn't that psychics get it wrong on rare occasions; instead it's that psychics get it right on rare occasions. Sylvia Browne been a psychic for half a century, yet she and others have consistently failed to predict important world events and tragedies that might have been prevented, from the Sept. 11 terrorist attacks to the Boston marathon bombings. They have consistently failed to find missing and abducted persons as well as wanted criminals and terrorists such as Osama bin Laden.

How could hundreds of psychics giving information over the course of nearly 10 years about three different missing children have failed to know they were alive and being held captive in a Cleveland home? How could psychics miss Jaycee Dugard, a California girl abducted when she was 11 and held captive for nearly 20 years by a couple in a suburban home?

In any other career, such a track record of failure would be fatal: if police detectives solved only a tiny minority of the crimes they investigated, or doctors correctly diagnosed and treated patients at a rate no higher than random chance, they'd soon be fired. But being a psychic is a unique career in which routine failure is simply denied or glossed over. Psychics can try to explain away their mistakes and use psychological tricks to convince the public of their validity, but their failures offer no answers or comfort to grieving families.