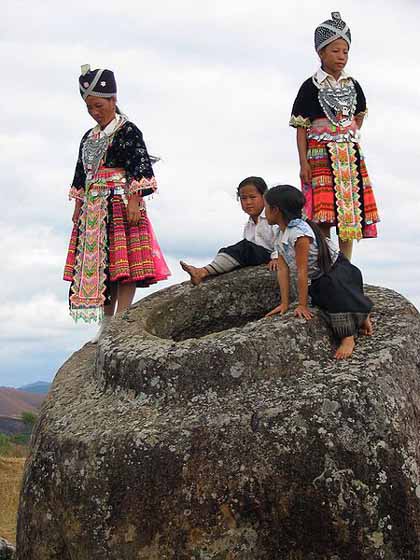 The Plain of Jars is a megalithic archaeological landscape in Laos. It consists of thousands of stone jars scattered around the upland valleys and the lower foothills of the central plain of the Xiangkhoang Plateau. The jars are mostly arranged in clusters ranging in number from one to several hundred.

The Xieng Khouang Plateau is located at the northern end of the Annamese Cordillera, the principal mountain range of Indochina. A French researcher in the early 1930s concluded that the jars were associated with prehistoric burial practices. Excavation by Lao and Japanese archaeologists in the intervening years has supported this interpretation with the discovery of human remains, burial goods and ceramics around the jars. The Plain of Jars is dated to the Iron Age (500 BC to AD 500) and is one of the most important prehistoric sites in Southeast Asia.

At the moment, the ethno-linguistic nature of the people is not known. Archaeologists believe that the jars were used 1,500-2,000 years ago. Most of the excavated material has been dated to around 500 BCĐ800 AD. Anthropologists and archeologists have theorized that the jars may have been used as funeral urns or perhaps storage for food.

Lao stories and legends claim that there was a race of giants who once inhabited the area. Local legend tells of an ancient king called Khun Cheung, who fought a long, victorious battle against his enemy. He supposedly created the jars to brew and store huge amounts of lao lao rice wine to celebrate his victory.

The first Westerner to survey, study and catalogue the Plain of Jars was a French archaeologist, Madeleine Colani of the Ecole franŤaise d'Extreme Orient in the 1930s. She excavated the area of jars with her team and found a nearby cave with human remains, including burned bones and ash. Her work is still the most comprehensive although there have been other excavations.

An American bomb damaged the cave during the Vietnam War, when the Pathet Lao used it as a stronghold - the surrounding area still has trench systems and bomb craters. The land is littered with metal shrapnel. The town of Xieng Khouang was destroyed during the fighting between the Pathet Lao and American backed anti-communist troops. A new town was built in the mid 1970s, known to foreigners as Phonsavan. 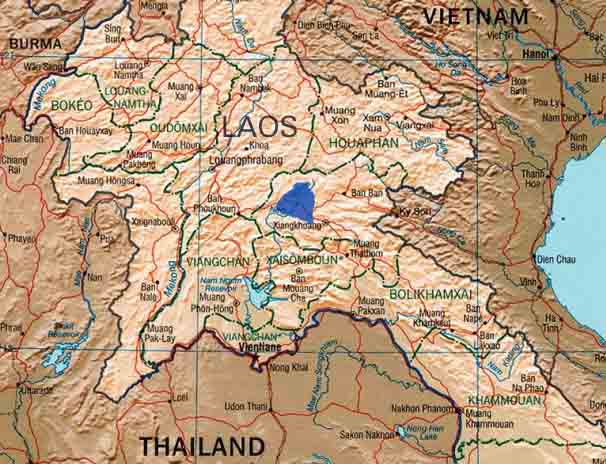 There are total of more than 400 sites across the whole Plain of Jars that centers on the area of Xieng Khouang. They range from Khorat Plateau in Thailand in the south, through Laos and to North Cachar Hills in northern India. Archaeologists have found more similar burials in India. The jars appear to be laid in a linear path that was probably a trade route.

The jars are made of sedimentary rock, usually sandstone, but also granite, conglomerate or calcified coral. They are angular or round and some have disks that could be lids. They can weigh up to 13 tonnes (14 short tons) and range from one to three metres (3 to 10 feet) in height.

The jars lie in clusters. The largest one near the town of Phonsavan, known as Site 1, contains over 250 jars of varying sizes. The jars now lie amidst thousands of unexploded bombs left behind by the Secret War in Laos in the 1960s. The large quantity of UXOs (unexploded ordnances), in particular cluster munitions, in the area means that only Sites 1, 2 and 3 are open to visitors - the others are considered too dangerous.

The bones, beads, bronze and iron tools and other artifacts that Colani discovered led her to believe that the jars were funerary urns. They have all since been dispersed, many to France. Her archaeological accounts have been published in the form of two large volumes, The Megaliths of Upper Laos. They still remain the primary source of the area.

Although the jars are the best-known and most visible aspect of the plains, researchers there have also discovered and photographed stone carvings. These include very tall, thin slabs of stone. The method used to create the thin slabs of stone without fracturing them is unknown.


Origin of the Jars 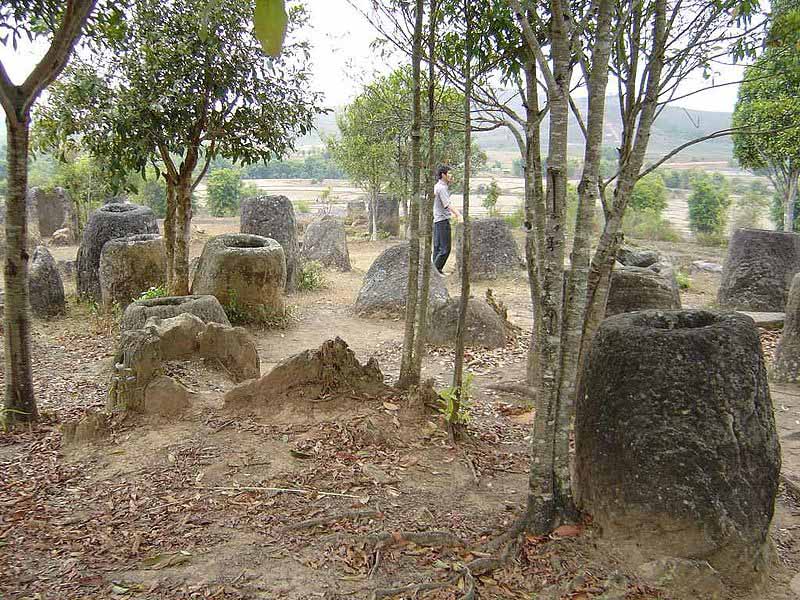 Madeleine Colani speculated that the plains of jars connected a caravan route from northern India, for which there is much evidence.

Colani also found a natural double chimneyed cave at the site of the largest jar field, with evidence of smoke accumulation by the chimneys, similar to a primitive kiln. She believed that it was a crematorium and speculated that the jars were used to deposit cremated human remains. Later excavations have found more human remains and also unburned bones.

Because the found bodies have been dated to various periods, it is possible that the place had been used as a burial ground also in later periods, using the contemporary customs.

This theory is the most popular, although there are various other theories.

Some refer to local tradition that states that the jars were molded, by using natural materials such as clay, sand, sugar, and animal products in a type of stone mix. This leads some to believe the cave Colani found was actually a kiln, and that the huge jars were molded there and are not of imported stone. Considering that many jars are made of substances like granite, archaeologists do not accept this idea.

Another explanation for the jars' use is for collecting monsoon rainwater for the caravan travellers along their journey in a time where rain may have been only seasonal and water not readily available on the easiest foot traveled path.

Rainwater could then be boiled, even if stagnant, to become potable again, a practice long understood in Eastern Eurasia. The trade caravans that were camping around these jars and could have placed beads inside jars as an offering, to accompany prayers for rain or they might simply have been lost items.

The Plain of Jars remains one of the most dangerous archaeological sites in the world.

Unexploded bombs, in particular cluster munitions, the results of massive US bombardment during the Secret War, still cause injuries every week. Visitors can safely visit only three sites, designated Jar Sites 1, 2 and 3, and they should follow signs still warning of unexploded bombs.

Archaeologically speaking the area is mixed with original artifacts, artifacts of the intervening eras - Buddhist statues, colonial items - and large amounts of scrap metal from the bombs.

The Laotian caretakers of the Plain of Jars are currently applying for status as a UNESCO World Heritage site. UNESCO-Lao Plain of Jars Project surveys the area. Clearing of the UXO hazard will be necessary before many of the sites can be studied and turned into tourist attractions.

As of July 2005, they have cleared most of the three aforementioned sites. They destroy the week's cache of removed explosives every Friday. Their funding is at an end.

More recently, those from the Ministry of Information and Culture and from Australian universities, among others, have taken part in studies of the jars. One of them is a Belgian archaeologist, Julie Van Den Bergh, who as of September 2005 had worked there regularly for four years. Read more ...

'Plain of Jars', one of the most mysterious archaeological sites, reveals its true age - around 3,000 years old   Live Science - April 29, 2021
The mysterious Plain of Jars in northern Laos - a landscape dotted with massive stone jars hewn from sandstone thousands of years ago Ń was likely used as a burial site for much longer than previously suspected, and perhaps for up to 2,000 years, according to new research. The massive jars, which were likely used to expose the dead to the elements until only their bones were left to be buried, could be more than 3,000 years old, new tests suggest. But the research also suggests that most of the human remains buried in the ground beside the ancient jars were interred there between 700 and 1,200 years ago.


We Finally Know The True Age of These Huge, Mysterious Plain of Jars Scattered in Laos   Science Alert - February 25, 2021
In total, there are thousands of them - a giant landscape of strange, hollowed jars, carved from ancient stone. Some have lids. Most are open to the sky. These surreal cauldron-like megaliths in Laos are known as the Plain of Jars, an archaeological relics whose original purpose is still shrouded in mystery, their significance long forgotten. he Plain of Jars pre-dates the most recent and confirmed discoveries of mortuary practices, by potentially thousands of years. As for what that means, we don't yet know. According to their analysis - using a technique called Optically Stimulated Luminescence (OSL) to date the ancient stone - the jars were positioned potentially as early as the late second millennium BCE. Australian archaeologists announced plans Wednesday to recreate Laos' mysterious Plain of Jars as a three-dimensional virtual reality experience, that could one day see museum visitors walk through remote dig sites. The Plain of Jars, in Laos' central Xieng Khouang province, is scattered with thousands of stone vessels but scientists have yet to discover their original purpose. Archaeologists have struggled to access the jar sites, many of which have yet to be cleared of unexploded mines and bombs dropped on the country during the Vietnam War. But Australian researchers now say that their use of drones which capture 3D images every 10 centimetres (3.9 inches) would allow them to explore sites like these that cannot be assessed in traditional ways.