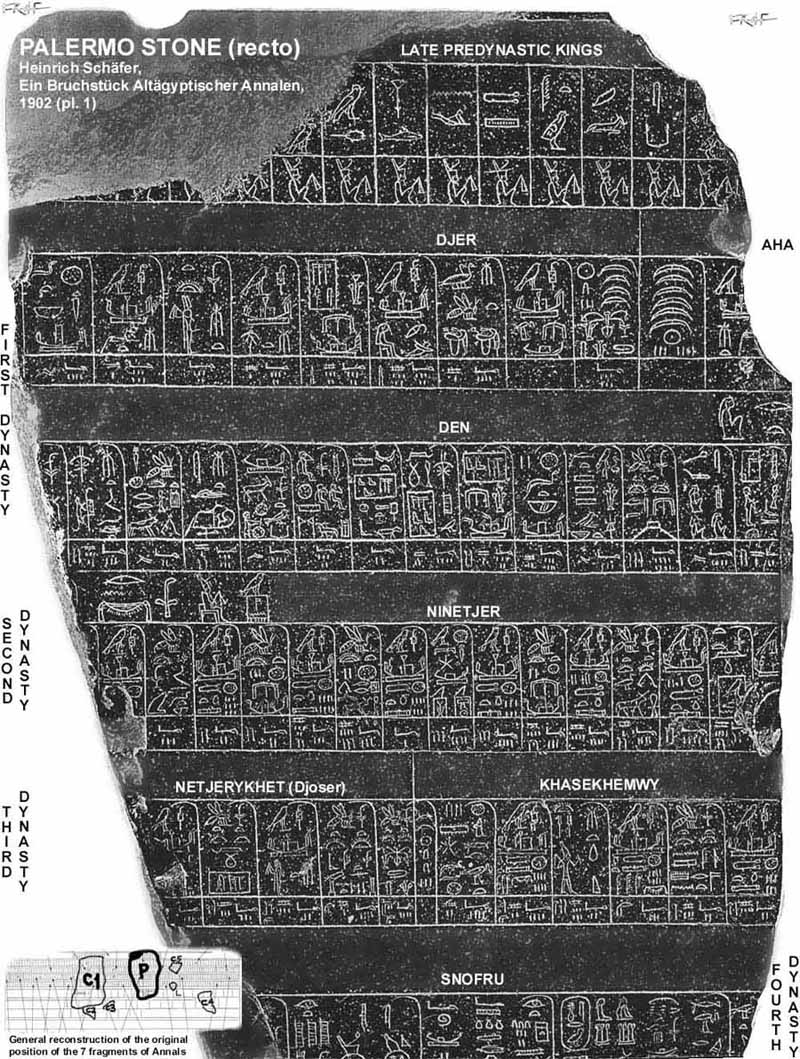 The Palermo Stone is an ancient Egyptian stela of black basalt engraved toward the end of the 5th dynasty (twenty-fifth century BC). It is probably the earliest Egyptian historical text. Now in a number of fragments, it details the reigns of the first Egyptian kings through the middle of the 5th dynasty and was doubtless among the documents Manetho used to construct his dynastic chronology. Unfortunately, most of the information concerning the first and second dynasties has not survived.

The main fragment has been in Palermo since 1866, though it was discovered by a visiting French archaeologist in 1895 and first published, by Heinrich SchŠfer, in 1902. It is currently in the collection of the Palermo Archeological Museum, Sicily, although there are also further sizeable pieces in the Egyptian Museum, Cairo, one discovered in 1910 another purchased on the market as recently as 1963, and in the museum of University College London, given by Sir Flinders Petrie. The engraved stone must originally have been about 2.2 m long, 0.61 m wide and 6.5 cm thick, but most of it is now missing, and there is no surviving information about its provenance, though a further fragment was excavated at Memphis.

It is a hieroglyphic list of the kings of ancient Egypt before and after Menes, with regnal years and notations of events. It also includes such information as the height of the flooding of the Nile in various years, information on cult ceremonies, taxation, sculpture, buildings and warfare.

Many king lists that exist from later dates, such as the Turin Canon (13th century BCE) and the Karnak List of Kings, identify Menes (c. 3100/3000) as the first king of the first Dynasty and credit him with unifying Egypt.

However, the Palermo Stone, which is substantially older, lists rulers that predate Menes. It seems to indicate that the unification of Egypt occurred earlier than Menes' rule and that he simply reunited the nation after a period of fragmentation.

Scholars are divided on how to interpret the implications of the stone. Some believe the earlier kings existed historically while others believe that their inclusion in the king list has only ideological value (i.e., there must have been disorder before order). Palermo Stone