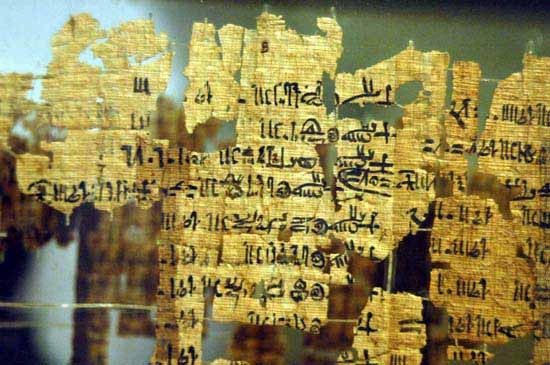 The Turin King List, also known as the Turin Royal Canon, is a hieratic papyrus thought to date from the reign of Ramesses II, now in the Museo Egizio (Egyptian Museum) at Turin. The papyrus is believed to be the most extensive list of kings compiled by the Egyptians, and is the basis for most chronology before the reign of Ramesses II.

The papyrus lists the names of rulers, the lengths of reigns in years, and months and days for individual kings. In some cases they are grouped together by family, which approximately corresponds to the dynasties of Manethošs outline. The list includes the names of ephemeral rulers or those ruling over small territories that may be unmentioned in other sources.

The list also is believed to contain kings from the 15th Dynasty, which were the Hyksos ruling Lower Egypt and the Delta. Although the Hyksos rulers do not have cartouches, a hieroglyphic sign is added to indicate that they were foreigners. Typically on King Lists foreign rulers are not listed.

The papyrus was originally a tax roll, but on its back is written a list of rulers of Egypt - encompassing gods, demi-gods, spirits, and human kings. That the back of an older papyrus was used may indicate that the list was not of great formal importance to the writer, although the primary function of the list is thought to have been as an administrative aid. The papyrus, being a king list, is not supposed to be biased against certain rulers and is believed to contain all the kings of Egypt up through at least the 19th Dynasty.

The papyrus was found by the Italian traveler Bernardino Drovetti in 1820 at Luxor (Thebes), Egypt and was acquired in 1824 by the Egyptian Museum in Turin, Italy and was designated papyrus no. 1874. When the box in which it had been transported to Italy was unpacked, the list had disintegrated into small fragments. Jean-Francois Champollion, examining it, could recognize only some of the larger fragments containing royal names, and produced a drawing of what he could decipher. A reconstruction of the list was created to better understand it and to aid in research.

The Saxon researcher Gustav Seyffarth re-examined the fragments, some only one square centimeter in size, and made a more complete reconstruction of the papyrus based only on the papyrus fibers, as he could not yet determine the meaning of the hieratic characters. Subsequent work on the fragments was done by the Munich Egyptologist Jens Peter Lauth, which largely confirmed the Seyffarth reconstruction.

In 1997 prominent Egyptologist Kim Ryholt published a new and better interpretation of the list in his book, "The Political Situation in Egypt during the Second Intermediate Period c.1800-1550 B.C." Following another study of the papyrus, an updated version from Ryholt is expected. Egyptologist Donald Redford has also studied the papyrus and has noted that although much of the listšs names correspond to monuments and documents, there are some discrepancies. Not all of the names on the list line up with monuments and documents, questioning the absolute reliability of the document as the foundation of pre-Ramessses II chronology.

Despite attempts at reconstruction, approximately 50% of the papyrus remains missing. This papyrus as presently constituted is 1.7 m long and 0.41 m high, broken into over 160 fragments. In 2009 previously unpublished fragments were discovered in the storage room of the Egyptian Museum of Turin, in good condition. A new edition of the papyrus is expected.

Contents of the Papyrus   Wikipedia