The Ojibwa or Chippewa (also Ojibwe, Ojibway, Chippeway) are the third-largest group of Native Americans in the United States, surpassed only by Cherokee and Navajo.

The major component group of the Anishinabek, they number over 100,000 living in an area stretching across the north from Michigan to Montana. Another 76,000, in 125 bands, live in Canada. They are known for their canoes and wild rice, and for the fact that they were the only Indian nation to defeat the Sioux.

By about A.D. 100, Native American inhabitants of the Upper Peninsula (Ojibwes) were using improved fishing techniques and had adopted the use of ceramics. They gradually developed a way of life based on seasonal fishing which the Chippewas/Ojibwes still followed when they met the first European visitors to the area. Scattered fragments of stone tools and pottery mark the location of some of these prehistoric lakeshore encampments. 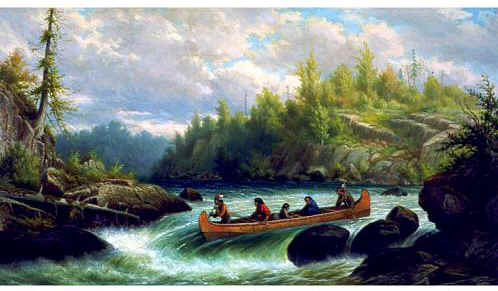 Organized into independent migratory bands, the Ojibwe were ideally suited to fur trade with the French.  They moved according to a seasonal subsistence economy - fishing in the summer, harvesting wild rice in the fall, hunting, trapping, and ice fishing in the winter, and tapping maple syrup and spearfishing in the spring. Their main building material, wiigwaas (birch bark), could be transported anywhere to make a wiigiwam (lodge shelter). Social organization was somewhat egalitarian, and women played a strong economic role. 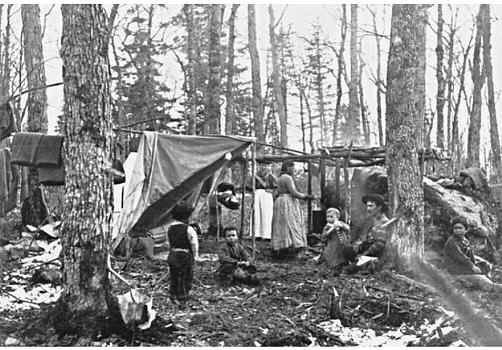 The manufacture of sugar was one of the principal Indian industries, if the term industry can be properly applied to anything existing in an Indian community. They produced large quantities of this article, and of good quality. Having completed its manufacture for the year, they packed it in mokoks (vessels or packages neatly made of birch-bark) and buried it in the ground, where it was kept in good condition for future use or sale. Their sugar-making resources were, of course, almost unlimited, for groves of maple abounded everywhere.

Once a year, soon afer sugar-making, nearly all the Indians of the interior repaired to Kepayshowink (the great camping-ground) which was where Saginaw now stands. They went there for the purpose of engaging in a grand jubilee of one or two weeksą duration engaging in dances, games, and feats of strength. Many an inveterate Indian feud reached a bloody termination on the "great camping ground" at Saginaw.

The Ojibwe language belongs to the Algonquian linguistic group. When first encountered by Europeans in the 17th century, they mostly lived around the shores of Lake Superior. Warring with the Dakota and the Fox, and newly armed by the French, they drove the Fox from northern Wisconsin and pushed the Dakota across the Mississippi. Eventually the Ojibwa reached the Turtle Mountains of North Dakota, and became known as the Plains Ojibwa.

The Ojibwa were part of a long term alliance with the Ottawa and Potawatomi First Nations, called the Council of Three Fires and which fought with the Iroquois Confederacy and the Sioux. The Ojibwa expanded eastward taking over the lands alongside the eastern shores of Lake Huron. The Ojibwa allied themselves with the French in the French and Indian War, and with the British in the War of 1812.

On July 8, 1822 the Ojibwa turned over a huge tract of land in Ontario to the United Kingdom. 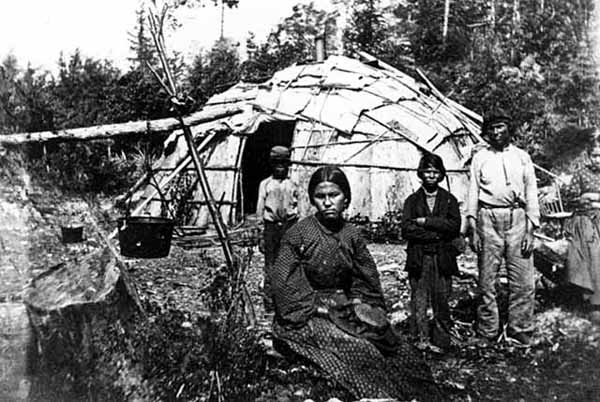 Most Ojibwa, except for the Plains bands, lived a sedentary lifestyle, engaging in fishing, hunting, the farming of maize and squash, and the harvesting of Manoomin (wild rice). Their typical dwelling was the waaginogan, made of birch bark, juniper bark and willow saplings. They also developed a form of pictorial writing used in religious rites of the Midewin and recorded on birch bark scrolls.

The Ojibwe people and culture are alive and growing today. During the summer months, the people attend pow-wows or "pau waus" at various reservations in the US and reserves in Canada. Many people still follow the traditional ways of harvesting wild rice, picking berries, hunting and making maple sugar. 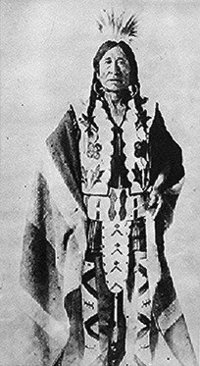 The Chippewa, are an important group of Native Americans/First Nations about equally divided between the United States and Canada. The popular name is a corruption of Ojibwa, but they call themselves Anishinabek, or original men, and because they formerly had their main residence at Sault Sainte Marie, at the outlet of Lake Superior, the French knew them by the name of Saulteurs.

They belong to the great Algonquian stock and are related to the Ottawa and Cree. According to their own tradition, they came from the east, advancing along the Great Lakes, and had their first settlement in their present country at Sault Sainte Marie and Shaugawaumikong (French Chegoimegon) on the southern shore of Lake Superior, near the present Lapointe or Bayfield, Wisconsin.

The decline of the fur trade transformed the traditional Ojibwe society. When the British ousted the French from the region, the Ojibwe allied with British traders and soldiers to drive away American settlers. After the US took control of the region, however, the Ojibwe fell on hard economic times. The men took menial jobs in the timber industry, and the role of women weakened. Nevertheless, the bands' isolation enabled the Ojibwe to preserve much of their religion and cultural traditions through the 19th and into the 20th century. 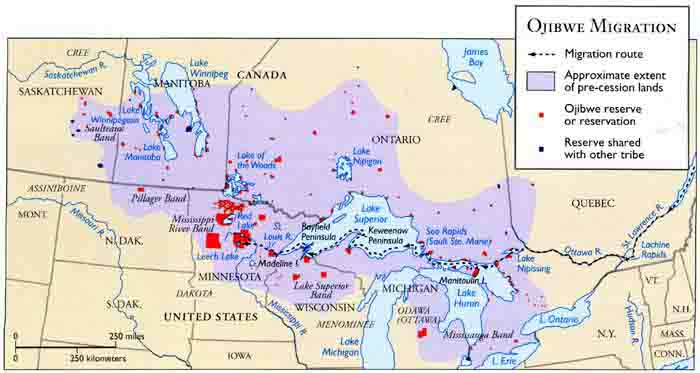 Starting about 1640, many Ojibwe moved (or were driven) westward from the Sault Ste. Marie area. Some turned south into the Lower Peninsula, later joining the Odawa (Ottawa) and Potawatomi in the Three Fires (three brothers) Society.  Others continued west along the Lake Superior shore and settled on Madeline Island (in Lake Superior) about 1680.  The map below shows not only where the Ojibwe peoples lived prior to European settlement, but also where they migrated to and where they eventually settled (on reservations).

Their first historical mention occurs in the Jesuit Relation of 1640. Through their friendship with the French traders they were able to obtain guns and thus successfully end their hereditary wars with the Sioux and Foxes on their west and south, with the result that the Sioux were driven out from the Upper Mississippi region, and the Foxes forced down from northern Wisconsin and compelled to ally with the Sauk.

By the end of the eighteenth century the Chippewa were the nearly unchallenged owners of almost all of present-day Michigan, northern Wisconsin, and Minnesota, including most of the Red River area and extending westward to the Turtle Mountains of North Dakota, together with the entire northern shores of Lakes Huron and Superior on the Canadian side.

They were never removed as so many other tribes have been, but by successive treaty sales they are now restricted to reservations within this territory, with the exception of a few families living in Kansas.

The Chippewas, like all other Indians, were extremely superstitious; indeed, they appeared to be more marked in this peculiarity than were most of the other tribes. It has already been mentioned that the ancestors of the later Saginaw Chippewas imagined that the country which they had wrested from the conquered Sauks was haunted by the spirits of those whom they had slain, and that it was only after the lapse of years that their terrors became allayed sufficiently to permit them to occupy the "haunted hunting-grounds." But the superstition still remained, and, in fact, it was never entirely dispelled.

Long after the valleys of the Saginaw, the Shiawassee, and the Maple became studded with white settlements, the Indians still believed that mysterious Sauks were lingering in the forests and along the margins of their streams for purposes of vengeance. So great was their dread that when (as was frequently the case) they became possessed of the idea that the munesous were in their immediate vicinity, they would fly, as if for their lives, abandoning everything, - wigwams, fish, game, and peltry, - and no amount of ridicule from the whites could induce them to stay and face the imaginary danger.

"Sometimes, during sugar-making," said Mr. Truman B. Fox, of Saginaw, "they would be seized with a sudden panic, and leave everything, - their kettles of sap boiling, their mokoks of sugar standing in their camps, and their ponies tethered in the woods, - and flee helter-skelter to their canoes, as though pursued by the Evil One.

In answer to the question asked in regard to the cause of their panic, the invariable answer was a shake of the head, and a mournful 'an-do-gwane' (don't know)." Some of the northern Indian bands, whose country joined that of the Saginaw Chippewas, played upon their weak superstition, and derived profit from it by lurking around their villages or camps, frightening them into flight, and then appropriating the property which they had abandoned.

A few shreds of wool from their blankets left sticking on thorns or dead brushwood, hideous figures drawn with coal upon the trunks of trees, or marked on the ground in the vicinity of their lodges, was sure to produce this result, by indicating the presence of the dreaded munesous. Often the Indians would become impressed with the idea that these bad spirits had bewitched their firearms, so that they could kill no game.

A very singular superstitious rite was performed annually by the Shiawassee Indians at a place called Pindatongoing (meaning the place where the spirit of sound or echo lives), about two miles above Newburg, on the Shiawassee River, where the stream was deep and eddying.

The ceremony at this place was witnessed in 1831 by Mr. B. O. Williams, of Owosso, who thus describes it: "Some of the old Indians every year, in fall or summer, offered up a sacrifice to the spirit of the river at that place. They dressed a puppy or dog in a fantastic manner by decorating it with various colored ribbons, scarlet cloth, beads, or wampum tied around it; also a piece of tobacco and vermilion paint around its neck (their own faces blackened), and after burning, by the river-side, meat, corn, tobacco, and sometimes whisky offerings, would, with many muttered adjurations and addresses to the spirit, and waving of hands, holding the pup, cast him into the river, and then appear to listen and watch, in a mournful attitude, its struggles as it was borne by the current down into a deep hole in the river at the place, the bottom of which at that time could not be discovered without very careful inspection. I could never learn the origin of the legend they then had, that the spirit had dived down into the earth through that deep hole, but they believed that by a propitiatory yearly offering their luck in hunting and fishing on the river would be bettered and their health preserved."