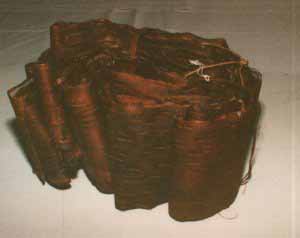 In the 1930s, an American anthropologist named Irving Hallowell journeyed north to Canada to live among the Ojibwa and study their culture.

When he left he took with him a wealth of knowledge - and something else - a bundle of sacred scrolls, made out of birch bark, and central to the performance of ancient religious ceremonies of the tribe.

The scrolls were never forgotten by those whose ancestors used them. Some elders in the tribe remember the old ways of doing things.

Elder Donald Bird still uses the sweat lodge behind his house. There were other rituals, like the drum and the shaking tent, used to conjure the souls of the living and the dead. When the Indian Act came into existence - it banned native ceremonies, making these ceremonies illegal. At this time many artifacts were lost or destroyed. The most significant were the sacred birch bark scrolls.

The scrolls disappeared for seven decades, until a passing reference in some of Hallowell's writing raised the possibility of finding them. Researcher Leanne Simpson was commissioned to lead the search.

She found them through the internet, at the Smithsonian Institution in Washington, D.C.

A dozen of the scrolls wound up there, acquired from a private American collector.

Smithsonian officials say they are extremely rare. They say most of them were destroyed when the missionaries came - seen as the work of the devil, for pagan rituals.

The Smithsonian Institution plans to help the Ojibwa of Hollow Water to bring the scrolls home.