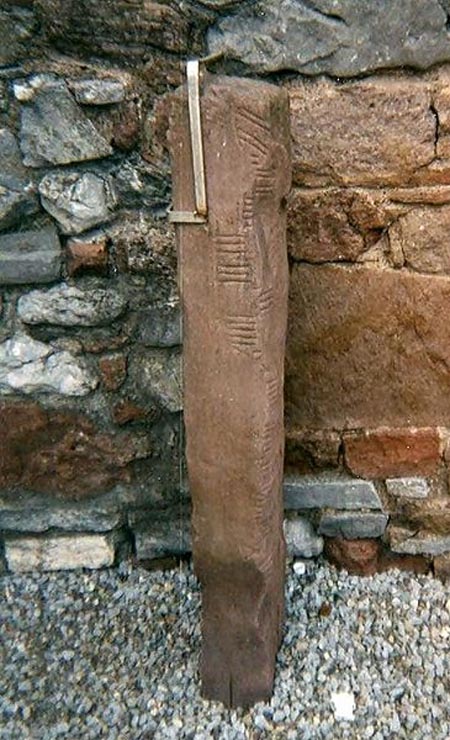 
Ogham is an Early Medieval alphabet used primarily to write the Old Irish language, and the Brythonic language. Ogham is sometimes called the "Celtic Tree Alphabet", based on a high medieval Briatharogam tradition ascribing names of trees to the individual letters. There are roughly 400 surviving ogham inscriptions on stone monuments throughout Ireland and western Britain; the bulk of them are in the south of Ireland, in Counties Kerry, Cork and Waterford. The largest number outside of Ireland is in Pembrokeshire in Wales. The remainder are mostly in south-eastern Ireland, Scotland, Orkney Isles, the Isle of Man, and England around the Devon/Cornwall border. The vast majority of the inscriptions consist of personal names.

The etymology of the word ogam or ogham remains unclear. One possible origin is from the Irish og-uaim 'point-seam', referring to the seam made by the point of a sharp weapon.

The earliest inscriptions in ogham date to about the 4th century AD, but James Carney believes its invention is rather within the 1st century BC. Although the use of "classical" ogham in stone inscriptions seems to have flowered in the 5thĐ6th centuries around the Irish Sea, from the phonological evidence it is clear that the alphabet predates the 5th century. A period of writing on wood or other perishable material prior to the preserved monumental inscriptions needs to be assumed, sufficient for the loss of the phonemes represented by uath ("H") and straif ("Z"), as well as the velar nasal, getal, all of which are clearly part of the system, but unattested in inscriptions.

It appears that the ogham alphabet was modeled on another script, and some even consider it a mere cipher of its template script (Duwel 1968 points out similarity with ciphers of Germanic runes). The largest number of scholars favours the Latin alphabet as this template, although the Elder Futhark and even the Greek alphabet have their supporters.

Runic origin would elegantly explain the presence of "H" and "Z" letters unused in Irish, as well as the presence of vocalic and consonantal variants "U" vs. "W" unknown to Latin or Greek writing. The Latin alphabet is the primary contender mainly because its influence at the required period (4th century) is most easily established, viz., via Britannia, while the runes in the 4th century were not very widespread even in continental Europe.

In Ireland and in Wales, the language of the monumental stone inscriptions is termed Primitive Irish. The transition to Old Irish, the language of the earliest sources in the Latin alphabet, takes place in about the 6th century. Since ogham inscriptions consist almost exclusively of personal names and marks possibly indicating land ownership, linguistic information that may be glimpsed from the Primitive Irish period is mostly restricted to phonological developments.

There are two main schools of thought among scholars as to the motivation for the creation of ogham. Scholars such as Carney and MacNeill have suggested that ogham was first created as a cryptic alphabet, designed by the Irish so as not to be understood by those with a knowledge of the Latin alphabet.

With this school of thought, it is asserted that the alphabet was created by Irish scholars or druids for political, military or religious reasons to provide a secret means of communication in opposition to the authorities of Roman Britain. The Roman Empire, which then ruled over neighboring southern Britain, represented a very real threat of invasion to Ireland, which may have acted as a spur to the creation of the alphabet.

Alternatively, in later centuries when the threat of invasion had receded and the Irish were themselves invading the western parts of Britain, the desire to keep communications secret from Romans or Romanized Britons would still have provided an incentive.. With bilingual ogham and Latin inscriptions in Wales, however, one would suppose that the ogham could easily be decoded by anyone in the Post-Roman world.

The second main school of thought, put forward by scholars such as McManus is that ogham was invented by the first Christian communities in early Ireland, out of a desire to have a unique alphabet for writing short messages and inscriptions in the Irish language. The argument is that the sounds of Primitive Irish were regarded as difficult to transcribe into the Latin alphabet, so the invention of a separate alphabet was deemed appropriate.

A possible such origin, as suggested by McManus (1991:41), is the early Christian community known to have existed in Ireland from around AD 400 at the latest, the existence of which is attested by the mission of Palladius by Pope Celestine I in AD 431. Palladius died and was buried at Auchenblae in the Mearns in eastern Scotland. These events may be associated with a Christian community there propagating ogham to the otherwise anomalous cluster of inscriptions in eastern Scotland.

A variation on both theories is that the alphabet was first invented, for whatever reason, in 4th century Irish settlements in west Wales after contact and intermarriage with Romanized Britons with a knowledge of the Latin alphabet. In fact, several ogham stones in Wales are bilingual, containing both Irish and Brythonic-Latin, testifying to the Celtic contact that led to the existence of some of these stones.

A third theory put forward by the noted ogham scholar R.A.S. Macalister was influential at one time, but finds little favor with scholars today. Macalister believed that ogham was first invented in Cisalpine Gaul around 600 B.C. by Gaulish druids as a secret system of hand signals, and was inspired by a form of the Greek alphabet current in Northern Italy at the time. According to this theory, the alphabet was transmitted in oral form or on wood only, until it was finally put into a written form on stone inscriptions in early Christian Ireland. Later scholars are largely united in rejecting this theory, however, primarily because a detailed study of the letters shows that they were created specifically for the Primitive Irish of the early centuries AD. The supposed links with the form of the Greek alphabet that Macalister proposed can also be disproved.

Macalister's theory of hand or finger signals as a source for ogham is a reflection of the fact that the signary consists of four groups of five letters, with a sequence of strokes from one to five. A theory popular among modern scholars is that the forms of the letters derive from the various numerical tally-mark systems in existence at the time. This theory was first suggested by the scholars Thurneysen and Vendryes, who proposed that the ogham script was inspired by a pre-existing system of counting based around the numbers five and twenty, which was then adapted to an alphabet form by the first ogamists.

Modern New Age and Neopagan approaches to ogham largely derive from the theories of Robert Graves in his book The White Goddess. In this work Graves took his inspiration from the theories of the ogham scholar R.A.S Macalister (see above) and elaborated on them much further. Graves proposed that the ogham alphabet encoded a set of beliefs originating in the Middle-east in Stone Age times, concerning the ceremonies surrounding the worship of the Moon-goddess in her various forms.

Graves' argument is extremely complex, but in essence he argues that the Hebrews, Greeks and Celts were all influenced by a people originating in the Aegean, called 'the people of the sea' by the Egyptians, who spread out around Europe in the 2nd Millennium BC, taking their religious beliefs with them.

At some early stage these teachings were encoded in alphabet form by poets in order to pass on their worship of the goddess (as the muse and inspiration of all poets) in a secret fashion, understandable only to initiates. Eventually, via the druids of Gaul, this knowledge was passed on to the poets of early Ireland and Wales. Graves therefore looked at the Tree Alphabet tradition surrounding ogham and explored the tree folklore of each of the letter names, proposing that the order of the letters formed an ancient "seasonal calendar of tree magic".

Although his theories have been disregarded by modern scholars (including Macalister himself, with whom Graves corresponded ), they have been taken up with enthusiasm by the neopagan movement. In addition, Graves followed the BLNFS order of ogham letters put forward by Macalister (see above), with the result that this has been taken up by New Age and Neopagan writers as the 'correct' order of the letters, despite its rejection by scholars.

The main use of ogham by modern Druids, Neo-Pagans is for the purpose of divination. Divination by using ogham symbols is mentioned in Tochmarc Etaine, a tale in the Irish Mythological Cycle. In the story, druid Dalan takes four wands of yew, and writes ogham letters upon them. Then he uses the tools for divination. The tale doesn't explain further how the sticks are handled or interpreted. They create a series of sticks, one for each letter. The sticks may be used in a fashion similar to runic divination. Another method requires a cloth marked out with Finn's Window. A person selects some sticks randomly, throws them on the cloth, and then looks both at the symbols and where they fell.

The divinatory meanings are usually based on the tree ogham, rather than the kennings of the Briatharogam. Each letter is associated with a tree or other plant, and meanings are derived from them. Robert Graves' book The White Goddess has been a major influence on assigning divinatory meanings for ogham. Some reconstructionists of Druidic ways use Briatharogam kennings as a basis for divinatory meanings in ogham divination. The three sets of kennings can be separated into Past-Present-Future or Land-Sea-Sky groupings in such systems, but other organizing structures are used, as well. Ogham Wikipedia 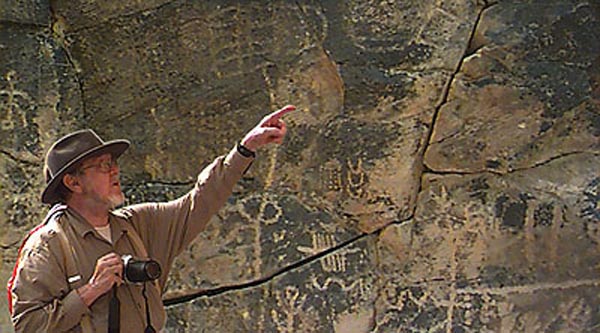 The idea that he had discovered evidence of ancient Europeans and Asians in the panhandle of Oklahoma was not unusual to Bill McGlone. He spent the better part of his life examining and researching the petroglyphs that were etched into the cliffs, peaks and caves all around his home in La Junta, Colorado.