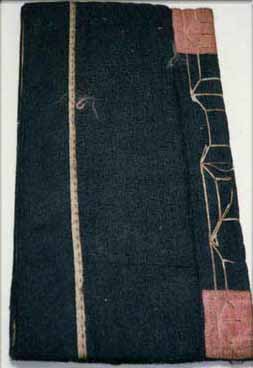 Nushu is one of the most interesting and least known writing systems that I know. The words nu shu literally means "Woman's Writing" in Chinese. As the name implies, Nushu is a writing system created and used exclusively by women in a remote part of China. Traditional Chinese culture is male-centered and forbids girls from any kind of formal education, so Nushu was developed in secrecy over hundred of years in the Jiangyong county of Hunan province.

Some Nushu characters are taken from Chinese, while others appear to be invented, but all are rendered in a style much more cursive than written Chinese. In addition, the characters are "thinner" than Chinese characters, which tends to be square-shaped. Also, like Chinese, Nushu is written from top to bottom in columns, and the columns are written from right to left.

The following is an example of Nushu. The text on the left is Nushu, while on the right is the exact Chinese transliteration. I left the columns for both texts in the original right-to-left order.

The passage roughly translates as... "They taught her to apply makeup and comb her hair; on her head she was wearing pearls that are shining magnificently; she is sitting like Guanyin (a Buddhist goddess) out of a Buddhist shrine".

There are only a handful of women who can still read and write in this script. In essence it is a dying language. However, no official programs exist to preserve this incredible cultural heritage, and it would be a shame that such a symbol of women's resilience in an oppressive environment will be lost to future generations.

China's last woman proficient in the mysterious Nushu language, probably the world's only female-specific language, died at her Central China home earlier this week. She was in her 90s.

Yang Huanyi learned to read and write the language as a little girl. Chinese linguists say her death put an end to a 400-year-old tradition in which women shared their innermost feelings with female friends through a set of codes incomprehensible to men.

Yang was born in Jiangyong County in Hunan Province where many people believe the language originated.

She learned the language from seven sworn sisters in the county who were regarded as the most authoritative speakers and writers of the language. Yang became its only survivor by the end of the 1990s, after the seven had passed away.

Until her death Sept. 20, it remained a mystery as to how old Yang was. During an interview with Xinhua in 2002, she said she was 94. Authorities in her hometown, however, said she was 98 when she died.

The letters, poems and prose Yang wrote were collected and compiled by linguists in Qinghua University into a book published early this year.

Although some linguists are trying to learn the female language, experts say Yang was more authoritative and unaffected by mandarin Chinese, in which she was totally illiterate.

None of Yang's children and grandchildren inherited her proficiency in the unique language.

Nushu characters are structured by four kinds of strokes, including dots, horizontals, verticals and arcs.


The Secret Language of Chinese Women

Nowadays, it would be called empowering women. But back then, centuries ago, it was just a way for the sworn sisters of this rugged and tradition-laden Chinese countryside to share their hopes, their joys and their many sorrows.

Only men learned to read and write Chinese, and bound feet and social strictures confined women to their husband's homes. So somehow - scholars are unsure how, or exactly when - the women of this fertile valley in the southwestern corner of Hunan province developed their own way to communicate. It was a delicate, graceful script handed down from grandmother to granddaughter, from elderly aunt to adolescent niece, from girlfriend to girlfriend - and never, ever shared with the men and boys.

So was born Nushu, or Women's Script, a single-sex writing system that Chinese scholars believe is the only one of its kind.

"The girls used to get together and sing and talk, and that's when we learned from one another," said Yang Huanyi, 98, a wrinkled farmer's widow whom scholars consider the most accomplished reader and writer among a fast- dwindling number of nushu practitioners. "It made our lives better, because we could express ourselves that way."

Scholars and local authorities have taken renewed interest in the exclusive language, trying to preserve it as the last women who are fluent reach the end of their lives. Generations of women in the region once penned their diaries in nushu, and the few journals that survived offer a unique chronicle of these private lives long ago. Today, girls learn Chinese along with the boys, so learning nushu has less appeal.

Nushu in some ways resembles Chinese, if some of the characters were stretched and altered. But it also differs in many respects. For example, according to researchers, the letters represent sound -- the sounds of this region's Cheng Guan Tuhua dialect -- and not ideas, as in the Chinese ideograms that men studied and wrote. Nushu was written from top to bottom in wispy, elongated letters in columns that read from right to left.

Much remains unknown about nushu. Its origins, reaching perhaps as far back as the third century, have been the subject of scholarly exchanges among a handful of researchers in China and elsewhere. They know it was used in Hunan's Jiangyong County, in south central China about 200 miles northwest of Guangzhou, and believe it was limited to what is now Jiangyong's Shungjian Xu Township, which includes Pumei and these days has a population of around 19, 000 people. But even that is not certain.

What seems clear is that nushu was fostered by the region's ancient custom of "sworn sisters," whereby village girls would pledge one another fealty and friendship forever. The tight sorority, which included growing up together in cobbled village lanes and gathering with adult women to weave and embroider, inevitably was shattered when the time for marriage came. Tradition dictated that a bride go away to her groom's home -- and that is where nushu came in.

Three days after the wedding, the adolescent bride would receive a "Third Day Book," a clothbound volume in which her sworn sisters and her mother would record their sorrow at losing a friend and daughter and express best wishes for happiness in the married life ahead. The first half-dozen pages contained these laments and hopes, written in nushu that the groom couldn't read. The rest were left blank for the bride to record her own feelings and experiences -- in nushu -- for what would become a treasured diary.

The sworn sisterhood tradition has led some scholars to speculate that nushu developed as a secret language for lesbians, according to Zhao Liming, a literature professor at Tsinghua University in Beijing who helped bring nushu to researchers' attention in the 1980s and is one of the foremost authorities on it.

Way to express themselves

"But that is not true," she said in an interview. "They just wanted a way to express themselves." She added: "Women needed a spiritual life. They could not write Chinese, but they wanted to express their feelings."

Most important to the women who learned it, sometimes memorizing letters written on the palms of their hands because of a lack of paper, nushu liberated them from illiteracy.

The way nushu came to light some 20 years ago also has been clouded in competing theories.

Lin Lee Lee at the University of Minnesota has written that a Jiangyong County woman visiting relatives in Beijing in 1982 astounded them by singing and then writing a language and script they could not understand. The relatives passed along their amazement to scholars, she said in a conference presentation, and research into the strange female writing system began.

But Zhou Shuoyi, 78, a self-described countryside intellectual who lives in nearby Yongzhou city, said he knows better, and he explained why.

One of his ancestors, a grandmother six generations back, wrote a poem titled "Educate the Girls." The poem, handed down from generation to generation, was translated into nushu by local village women, he said, and his aunt brought the nushu version to his father's house sometime in the 1920s as a subject of curiosity.

Zhou's father, a schoolteacher, was impressed by the strange writing he couldn't understand and urged the young Zhou to investigate. Later, working for the Jiangyong County cultural department in the 1950s, Zhou said he discovered a number of elderly peasant women still mastered nushu. A speaker of the Tuhua dialect, he was also able to get a whiff of what nushu was about -- and what a cultural discovery there was to make.

"At that time, many grandmothers could sing it, write it and read it," he said in an interview. "In society at that time, there was injustice between men and women, and women needed this language as a way to express themselves."

Zhou reported his findings to authorities in Beijing, but by then the Cultural Revolution had convulsed China. As an intellectual, Zhou said, he was branded a rightist and forced to halt his work. Red Guard zealots destroyed the nushu documents he had painstakingly accumulated.

"But the stuff in here could not be burned," he smiled, pointing at his head and its tufts of white hair.

So in 1979, when calm had returned, Zhou said, he went back to work at a local museum and resumed his interest in nushu, eventually learning to read and write.

In 1982, he said, he wrote a book about the region's culture, including a section on nushu. Scholars from relatively nearby Wuhan, from faraway Beijing and eventually even from abroad started dropping by. Nushu had been discovered.

Zhao said that over the last 20 years she has guided a number of graduate students, Chinese and foreign, in studying nushu at Tsinghua. Estimates of its contemporary vocabulary range from 670 to 1,500 words. A dozen of Zhao's students recently started compiling them in a dictionary. The students include three young men, she specified with a smile.

But aside from scholars, Zhao and Zhou said, fewer than 10 people can fluently read and write nushu. Yang, the 98-year-old, has little time left. Several other women in Jiangyong County who can read and write, or at least read, also have neared the end of their lives.

Local authorities nevertheless have seized on nushu's cultural value, and on its tourism potential. An $80,000 school and museum went up last year here in Pumei, where Hu Mei Yue, 42, visits every Saturday to teach nushu to any village girls who show up.

Hu, who learned from her grandmother, the late Gao Yinxin, also embroiders bags and handkerchiefs with nushu writings to sell to tourists, who people here hope will start coming soon to see what they have baptized "Pumei, Nushu Cultural Village."

"I don't know how people can write like this," remarked classmate Hu Cui Cui, 12, who said she can read about 200 words. "Each word is like a flower."