Lord of the Sunrise

In Egyptian mythology, Nefertem (also Nefertum, Nefer-Tem, Nefer-Temu) was originally just the young Atum (his name means beautiful Atum, i.e. youthful Atum), at the creation of the world, who had arisen from the primal waters, in the Ennead cosmogeny.

Since Atum was a solar deity, Nefertum represented sunrise, and since Atum had arisen from the primal waters in the bud of an Egyptian blue water-lily, Nymphaea caerulea, Nefertum was associated with this flower. (This flower is widely used in Egyptian art, religion and literature. In much of the literature about ancient Egypt, it is called the "(blue) lotus".

However, the true lotus, Nelumbo nucifera, is not found in Egypt until the time of the Persian invasion, when it was introduced as a food crop.) Later, as time wore on, Atum became assimilated into Ra (as Atum-Ra), and so it came to be that people regarded Nefertum as a separate deity.

Some of the titles of Nefertem were "He Who is Beautiful" and "Water-Lily of the Sun", and a version of the Book of the Dead says, "Rise like Nefertem from the blue water lily, to the nostrils of Ra, and come forth upon the horizon each day."

As the power of Memphis grew, their chief god, Ptah, was said to be the original creator, and thus of all the other gods, including any lesser creators, who create the remaining gods having first being created by Ptah. Consequently, the creator aspect of Atum-Ra, namely Nefertum, came to be merely the son of Ptah, rather than the creator proper.

As son of Ptah, it was said that either Sekhmet, or Bast (whichever was considered wife of Ptah), was his mother. As a god now only associated with the highly aromatic blue water-lily rather than creation, he became a god of perfume and luck. 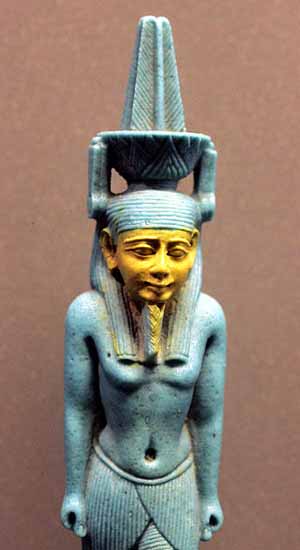 In art, Nefertum is usually depicted as a beautiful young man having blue water-lily flowers around his head. As the son of Bast, he also sometimes has the head of a lion or is a lion or cat reclining.

Nefertem was associated both with the scent of the blue water-lily flower and its supposed narcotic effect (widely presumed, but yet untested scientifically). The ancient Egyptians often carried small statuettes of him as good-luck charms.