In Egyptian mythology, Nehebkau (also spelt Nehebu-Kau, and Neheb Ka) was originally the explanation of the cause of binding of Ka and Ba after death. Thus his name, which means (one who) brings together Ka. Since these aspects of the soul were said to bind after death, Nehebkau was said to have guarded the entrance to Duat, the underworld.

was one of the more important glyphs in his name, and although it was technically a variation on the glyph for two arms raised in prayer, it also resembles a two-headed snake, and so Nehebkau became depicted in art as a snake with two heads (occasionally with only one). As a two-headed snake, he was viewed as fierce, being able to attack from two directions, and not having to fear as much confrontations.

Consequently sometimes it was said that Atum, the chief god in these areas, had to keep his finger on him to prevent Nehebkau from getting out of control. Alternately, in areas where Ra was the chief god, it was said that Nehebkau was one of the warriors who protected Ra whilst he was in the underworld, during Ra's nightly travel, as a sun god, under the earth. 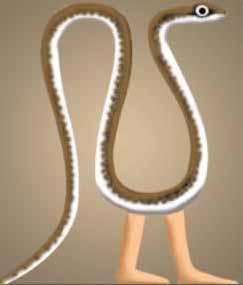 When he was seen as a snake, he was also thought to have some power over snake-bites, and by extension, other poisonous bites, such as those of scorpions, thus sometimes being identified as the son of Serket, the scorpion-goddess of protection against these things. Alternatively, as a snake, since he was connected to an aspect of the soul, he was sometimes seen as the son of Renenutet, a snake-goddess, who distributed the Ren, another aspect of the soul, and of the earth (Geb), on which snakes crawl.

Ka is also the Egyptian word for phallus, and so as the somewhat difficult to interpret (one who) harnesses together phalluses, he was often depicted in an Ithyphallic manner (still as a snake).