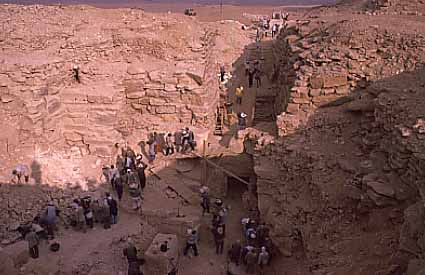 An examination of the Pyramid of Neferefre, long known as the Unfinished Pyramid in the pyramid field at Abusir, gives us considerable insight to how Egyptologists gather evidence in order to sort out Egyptian history.

This pyramid was examined by a number of early explorers, including Perring, Lepsius, de Morgan, Borchardt and others. While some of these thought it might be Neferefre's pyramid, others attributed it to Shepseskare. None of them thought that the intended owner's mummy occupied the unfinished pyramid. Actually, the pyramid looked much like a mastaba tomb, but it was square and not rectangular nor north-south oriented like mastabas. Indeed, because of its truncated shape, what had been planned as a pyramid became a bench-like structure which later priests called 'the primaeval hill', a place of eternal birth, of life and resurrection.

Finally, in the 1970s, the University of Prague did a systematic investigation, and by piecing together various clues, arrived at the conclusion that it was indeed Neferefre's pyramid, and that his mummy had in fact been buried in the pyramid.

Clue two: On a limestone block found in the village of Abusir, which probably came from Neferirkare's mortuary temple, we find that king along with his consort Khentkaues II and his eldest son, Neferre. We believe that Neferre, which means "Re is beautiful", probably later changed his name to Neferefre which means, "Re is his beauty". As the southeast corners of the Giza pyramids line up with each other and point to the ancient center of Heliopolis, so too do the northwest corners of the main most the pyramids at Abusir. The first two pyramids on a line with Heliopolis at Abusir are those of Sahure and Neferirkare, with this third unfinished pyramid being next. Therefore, it would seem that it belonged to the next king, who we believe to have been Neferefre.

Other archaeological evidence has since strengthened the assumption that the pyramid is that of Neferefre. We believe the pyramid was called, "Divine is Neferefre's power".

The unfinished nature of this pyramid has also aided Egyptologists in their study of the construction of pyramids. For this particular pyramid, first the underground pit was dug for the burial chamber and the descending corridor.Next, huge limestone blocks were laid as a foundation and finally the core of the pyramid was built atop the foundation. 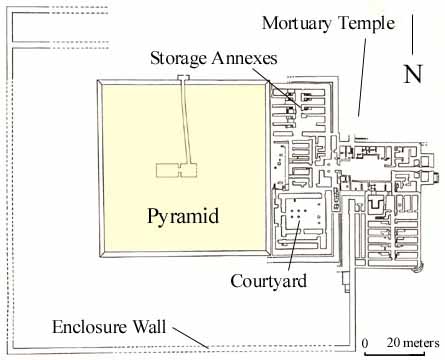 The core was built of horizontal layers about a meter high, with the outer mantle consisting of large, rough blocks up to five meters long. These were stacked to make the first core step about seven meters high.A clay mortar was used for binding. Internal blocks, particularly around the cavities, were smaller. In between the inner and outer layers of the core was fill, consisting of sand, rubble, clay and some stone fragments. We believe Neferefre probably died prior to completion of the first core level, so the remainder of the pyramid that was finished, as well as the mortuary temple were probably by his successors.

While the great pyramid at Giza may be much more spectacular then this seeming pile of rubble, Egyptologists can dissect this one, and therefore find insights that Khufu's cannot reveal.

Unfortunately, this pyramid had a roof terrace that made it easy for the fine stone within to be stolen for reuse.The thieves simply dug down from above, and even set up a workshop on the terrace for breaking up the fine white limestone lining the inner rooms. The structure was probably first plundered during the First Intermediate Period, so it became an easy target for stone quarrying in later years. We know, for example, that stones from this pyramid were used in some nearby shaft tombs by the Persians late in Egypt's history, and stones continued to disappear down into the 19th century.

The entrance to this pyramid is in the middle of its north side, close to ground level.It curves slightly to the southeast before reaching the antechamber, and in the lower regions is lined with pink granite and sealed with the same material.The huge barrier block made of pink granite has interlocking jaws and is unique in this pyramid.

Past the barrier, the antechamber and burial chamber in this pyramid are aligned very precisely east-west. Both of these rooms are lined with fine white limestone, and while extensively damaged in antiquity by stone thieves, they also both had gabled ceilings.

Obviously only scant remains of the original content of the pyramid was found. But of considerable importance, along with fragments of a pink sarcophagus, four alabaster canopic jars and alabaster containers, parts of a mummy were found. Anatomical investigation seems to indicate that the mummy belongs to a 20 to 23 year old man, and other evidence suggests that these remains are probably those of Neferefre. These was also a foundation deposit discovered that included a bull's head, miniature clay vessels along with gray clay to seal the vessels.

On the east side of the same foundation on which the pyramid is built a very small mortuary temple, aligned north-south, was also built of smaller blocks of fine white limestone. The entrance was by a stairway and ramp on the southeast. Just behind the entrance is a small basin that was used by the priests to perform ritual purification. Because of the ruined state of this temple, we can only guess at much of its design. As usual, there was an offering hall in the center of the temple. There is a depression its floor that was probably left by an alter but, for example, if there was a false door on the west wall as in other temples, no evidence of it can be found. We are also unsure exactly who built this oldest part of the temple.

Later, during the reign of Niuserre, additions were made adding a whole, new, mudbrick section to the temple along the east side of the pyramid.Its entrance was through a portico with two four-stemmed lotus limestone columns and was located right in the middle of the east facade.In the center of this addition were what we believe to have been five storage annexes, and there was a group of ten two-story storage magazines in the north section. A large number of papyri were found in the northern magazines.

The southern part of the addition consists of a unique, east-west oriented hall with 20 six stemmed wooden lotus columns. This was the first hypostyle hall that we know of during the age of the pyramid builders. The hall probably served a religious function of which we are unaware, because fragments from the ceiling show that it was astronomical, painted with yellow stars on a dark blue background. About this hall were found fragments of statues of Neferefre and wooden figures of captive enemies, along with other cult objects. One such statue, to be found today in the Egyptian Antiquities Museum, has the distinctive royal accessories including the false beard (broken-off), the mace in his right hand, and a round wig with regular concentric circles enclosing the skull. The falcon god Horus surrounds the cape of the neck by his wings, while his claws hold two " shen " signs that are symbol of duration, both providing eternal protection for the king and kingship.

Niuserre also built a further addition to the temple complex on the east side.This included a new, monumental entrance with two limestone, six-stemmed papyrus columns, an entrance hall and an open, 22 columned courtyard. As a result of all the additions, a huge and architecturally unique temple emerged, which has no parallel among other pyramid complexes

We know that brick housing for priests were set up in the pillared courtyard.They kept the cult of the king alive through about the 6th Dynasty, when the temple was abandoned. A revival during the 20th Dynasty was short lived.

The papyri found in the north magazines of the temple addition built by Niuserre, consisting of some 2,000 fragments, has been very useful. They not only deal with the structural and functional aspects of this temple, but also the Abusir necropolis as a whole.They reveal many mysteries of the pyramid complex as well as the deification of Neferefre.