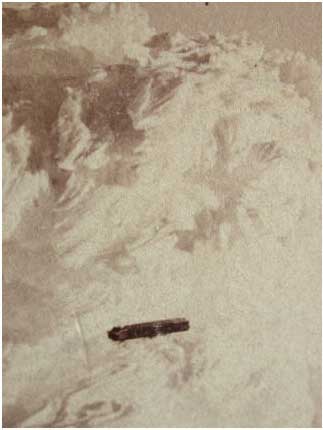 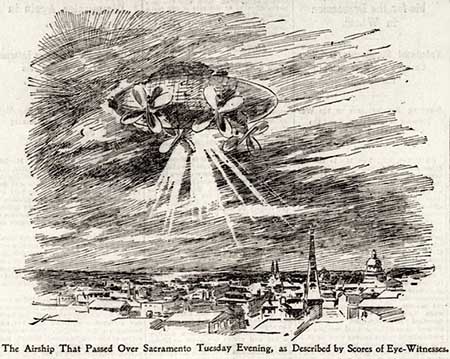 Mystery airships or phantom airships are a class of unidentified flying objects best known from a series of newspaper reports originating in the western United States and spreading east during late 1896 and early 1897. According to researcher Jerome Clark, airship sightings were reported worldwide during the 1880s and 1890s. Mystery airship reports are seen as a cultural predecessor to modern claims of extraterrestrial-piloted flying saucer-style UFOs.


Typical airship reports involved night time sightings of unidentified lights, but more detailed accounts reported ships comparable to a dirigible. Reports of the alleged crewmen and pilots usually described them as human-looking, although sometimes the crew claimed to be from Mars. It was popularly believed that the mystery airships were the product of some inventor or genius who was not ready to make knowledge of his creation public. For example, Thomas Edison was so widely speculated to be the mind behind the alleged airships that in 1897 he was forced to issue a strongly worded statement denying his responsibility.

In 1868, Charles Fort cited a mystery airship sighting in Copiapo, Chile. It was described as a gigantic, shining bird driven by a noisy motor.

In a variation of the usual airship, on July 29, 1880 two witnesses in Louisville, Kentucky saw a flying object described as "a man surrounded by machinery which he seemed to be working with his hands" with wings protruding from his back. Merely a month later, a similar sighting happened in New Jersey. It was written at the New York Times that "it was apparently a man with bat's wings and improved frog's legs... the monster waved his wings in answer to the whistle of a locomotive."

There were a number of mystery airship reports from the East Coast of the U.S. in 1887.

The Mystery Airships were a class of unidentified flying objects, the best-known series of which were reported in newspapers in western states of the U.S., starting in 1896 and continuing into 1897.

The reported ships were usually said to be a type of dirigible, and were usually differentiated from gliders or hot air balloons. The best-known wave of airship tales were largely confined to North America, but according to Jerome Clark, similar reports were made worldwide, early as the 1880s, and late as the 1990s.

The best-known of the Mystery Airship waves began in California in 1896. Afterwards, reports and accounts of similar airships came from others areas, generally moving east. There were a number of mystery airship reports from the U.S. east coast in 1887.

Some accounts during this wave of airship reports claim that occupants were visible on some airships, and encounters with the pilots were reported as well. These occupants were said to be human, though their behavior, mannerisms and clothing were sometimes reported to be unusual. One witness from Arkansas-- allegedly a former state senator Harris -- was supposedly told by an airship pilot (during the tensions leading up the Spanish American War) that the craft was bound for Cuba, to use its "Hotchkiss gun" to "kill Spaniards". (Jacobs, 10)

In one account from Texas, three men reported an encounter with an airship and with "five peculiarly dressed men" who reported that they were descendant from the lost tribes of Israel; they had learned English from the 1553 north pole expedition led by Hugh Willoughby.

At least two airship tales were taken as at least possibly genuine by generations of later ufologists:

An account by Alexander Hamilton of Leroy, Kansas supposedly occurred about April 19, 1897, and was published in the Yates Center FarmerŐs Advocate of April 23. Hamilton, his son, and a tenant witnessed an airship hovering over his cattle pen. Upon closer examination, the witnesses realized that a red "cable" from the airship had lassoed a heifer, but had also become entangled in the penŐs fence. After trying unsuccessfully to free the heifer, Hamilton cut loose a portion of the fence, then "stood in amazement to see the ship, cow and all rise slowly and sail off." Some have suggested this was the earliest report of cattle mutilation.

An account from Aurora, Texas (as related in the Dallas Morning News) reported that an airship had smashed into a windmill-- later determined to be a "sump pump" - belonging to a Judge Proctor, then crashed. The occupant was dead and mangled, but the story reported that presumed pilot was clearly "not an inhabitant of this world." Strange "hieroglyphic" figures were seen on the wreckage, which resembled "a mixture of aluminum and silver ... it must have weighed several tons."" In the 20th Century, unusual metallic material recovered from the presumed crash site was shown to contain a percentage of aluminum and iron admixed. The story ended by noting that the pilot was given a "Christian burial" in the town cemetery.

In April, 1897, hoaxers manufactured a large tissue paper balloon and set it loose over Burlington, Iowa. The Des Moines Leader received reports from citizens who swore the balloon had 'red and green lights; one reputable citizen swore he heard voices.'

There was a series of mystery airship sightings in 1909. Some came from various European locations, some from New England and from New Zealand. Later reports came from the Uk in 1912 and 1913. However, by this time airship technology was well advanced (Count Ferdinand von Zeppelin had been flying his massive passenger-carrying airships for nearly a decade by then), making the prospect that these may have been small, private airships rather than evidence of extraterrestrial visitation or newspaper hoaxes more reasonable. Wallace Tillinghast, a Massachusetts businessman, gained notoriety for claims he was responsible for the 1909 wave due to an airship he had built, but his claims were never substantiated.

In 1973, MUFON investigators discovered the alleged stone marker used in this burial. Their metal detectors indicated a quantity of foreign material might remain buried there. However, they were not permitted to exhume, and when they returned several years later, the headstone -- and whatever metallic material had lay beneath it -- was gone.

Writer Jerome Clark writes that "One curious feature of the post 1887 airship waves was the failure of each to stick in historical memory. Although 1909, for example, brought a flood of sightings worldwide and attendant discussion and speculation, contemporary accounts do not allude to the hugely publicized events of little more than a decade earlier." (Clark 2000, 123)

Clark writes that attempts to "uncover the truth about the late-nineteenth-century airship scare comes up against some unhappy realities: newspaper coverage was unreliable; no independent investigators ('airshipologists') spoke directly with alleged witnesses or attempted to verify or debunk their testimony; and, with a single unsatisfactory exception, no eyewitness was ever interviewed even in the 1950Ős, when some were presumably still living."(Clark 1998, 37)

The "single unsatisfactory example" Clark cites is a former San Francisco Chronicle employee interviewed via telephone by Edward J. Ruppelt in 1952. Ruppelt wrote that the man "had been a copy boy ... and remembered the incident, but time had cancelled out the details. He did tell me that he, the editor of the paper, and the news staff had seen 'the ship', as he referred to the UFO. His story, even though it was fifty-six years old, smacked of others IŐd heard when he said that no one at the newspaper ever told anyone what they had seen; they didnŐt want people to think they were 'crazy.'"

During the 1896-1897 wave, there were many attempts to explain the airship sightings, including suggestion of hoaxes, pranks, publicity stunts and hallucinations. One man suggested the airships were swarms of lightning beetles misidentified by observers (Jacobs, 30).

Jacobs notes that many airship tales were due to "Enterprising reporters perpetrating journalistic hoaxes." (Jacobs, 16) However, Jacobs notes that many of these accounts "are easy to identify because of their tongue-in-cheek tone, and accent on the sensational." (ibid.) Furthermore, the supposed authors of many such newspaper hoaxes make their hoax obvious "by saying--in the last line--that he was writing from an insane asylum (or something to that effect)." (Jacobs, 17-18)

Some argued that the airship reports were genuine accounts. Steerable airships had been publicly flown in the US since the Aereon in 1863, and numerous inventors were working on airship and aircraft designs (the idea that a secretive inventor might have developed a viable craft with advanced capabilities was the focus of Jules Verne's 1886 novel Robur the Conqueror).

Several individuals, including Lyman Gilmore and Charles Dellschau, were later identified as possible candidates for being involved in the design and construction of the airships, although little evidence was found in support of these ideas.

Early citations of the extraterrestrial hypothesis, all from 1897, include the Washington Times, which speculated that the airships were "a reconnoitering party from Mars"; and the Saint Louis Post-Dispatch, which suggested of the airships, "these may be visitors from Mars, fearful, at the last, of invading the planet they have been seeking." (Jacobs, 29) In 1909, a letter printed in the Otago Daily Times (New Zealand) suggested that the mystery airship sightings then being reported in that country were due to Martian "atomic-powered spaceships." (Clark 2000, 123) Mystery Airships Wikipedia

Without physical proof such as clear photos or contact with extraterrestrial witness by many people - there are several conclusions that can be drawn. While they actually were extraterrestrials who are visiting, monitoring and/or experimenting on planet Earth. Some sightings were hoaxes - while others were hoaxes or misidentification. In the 1890s it was unlikely the government was covering up an extraterrestrial presence.

Here we are in the second decade of the 21st-century and still we have no definitive proof to which we can come to conclusions about who we are, why we are here not only on planet Earth but in what appears to be a biogenetic experiment linked to extraterrestrials. The answer is in our DNA. 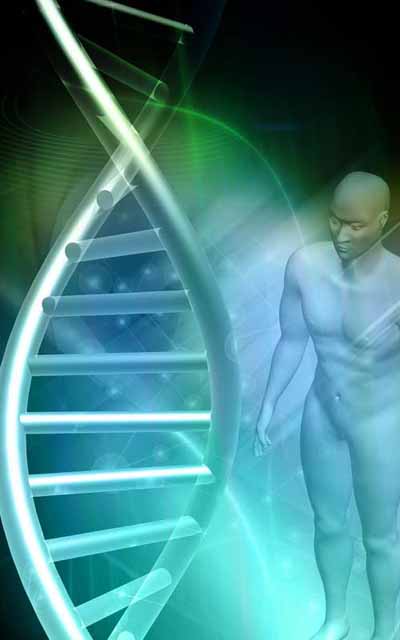