Mut depicted as a woman wearing the double crown plus


Mother Goddess of the New Kingdom

The word Mut means "mother" and Mut was the great mother goddess of Egypt, even outranking Isis. Often Mut was believed to be a sort of grandmother figure, as Isis was the mother figure for the world. She was said to be the consort of Amun, and their son was the moon-god Khonsu. 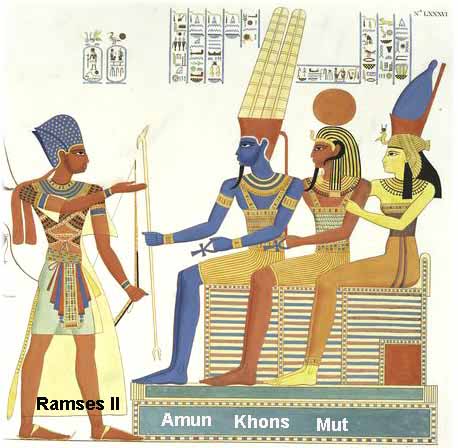 The three formed a sort of heavenly family for their people. Each year a festival would be held celebrating the marriage of Amun and Mut. The high priest of Amun would lead a procession from Karnak to the temple at Luxor.


Mut (Maut) was the queen of the gods at Waset (Thebes), arising in power with the god Amen. She came to represent the Eye of Ra, the ferocious goddess of retribution and daughter of the sun god Ra. Originally a local goddess, probably from the delta area, she became a national goddess during the New Kingdom and was adored at one of the most popular festivals at the time - the Festival of Mut. 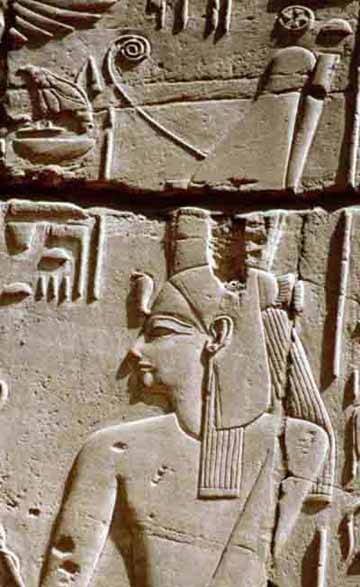 She was either depicted as a woman, sometimes with wings, or a vulture, usually wearing the crowns of royalty - she was often shown wearing the double crown of Egypt or the vulture headdress of the New Kingdom queens. Later she was shown as woman with the head of a lioness, as a cow or as a cobra as she took on the attributes of the other Egyptian goddesses. The ancient Egyptian link between vultures and motherhood lead to her name being the ancient Egyptian word for mother - mwt

In Southern Africa, the name for an Egyptian vulture is synonymous with the term applied to lovers, for vultures like pigeons are always seen in pairs. Thus mother and child remain closely bonded together. Pairing, bonding, protecting, loving are essential attributes associated with a vulture. Because of its immense size and power and its ability to sore high up in the sky, the vulture is considered to be nearer to God who is believed to reside above the sky. Thus the qualities of a vulture are associated with Godliness. On the other hand the wide wingspan of a vulture may be seen as all encompassing and providing a protective cover to its infants. The vulture when carrying out its role as a mother and giving protection to its infants may exhibit a forceful nature whilst defending her young. All these qualities inspired the imagination of the Ancient Egyptians. They adopted what seemed to them at the time to be motherly qualities, the qualities of protecting and nurturing their young.

- Ma-Wetu, The Kiswahili-Bantu Research Unit for the Advancement of the Ancient Egyptian Language

Mut took over the position of the original wife of Amen - Amaunet, the invisible goddess - during the Middle Kingdom and rose to power when the New Kingdom rulers took up the worship of Amen. The pharaohs moved to Waset, making it their capital, and so the worship of the local Waset gods spread throughout the land. As Amen became the god of the pharaohs, Mut became their symbolic mother and was identified with the queens. Their adopted son was Khonsu, the moon god, and the three were worshiped as a triad at Waset and at the Temple of Amen at Ipet-Resyt (Luxor). Originally their adopted son was Montu, the god of war, but he was dropped in favor of the moon god, possibly because the shape of Mut's sacred lake was in the shape of a crescent moon.

During the Festival of Mut in Waset, a statue of the goddess was placed on a boat and sailed around the small crescent shaped sacred lake at her temple at Ipet-Isut (Karnak). In a yearly matrimonial ceremony during the New Year festival, Amen traveled from his temple at Ipet-Resyt down to Ipet-Isut to visit her. Originally this was for the fertility goddess Ipet (Taweret), as a way of ensuring fertility for the coming year.

Unas hath had union with the goddess Mut, Unas hath drawn unto himself the flame of Isis, Unas hath united himself to the blue water lily...

There was also a composite deity called "Mut-Isis-Nekhbet, the Great Mother and Lady" who was shown as a winged goddess with leonine feet, an erect penis and three heads - a lion head wearing Min's headdress, a woman's head wearing the double crown of Egypt and a vulture's head wearing the red crown of Lower Egypt.

In The Book of the Dead, a spell was spoken over a statue of her.

The statue had her with three heads - one of the heads was that of a lioness wearing a headdress of two tall plumes, a human head wearing the double crown, and the third being the head of a vulture, again wearing the headdress of two plumes - as well as wings, an erect penis and the paws of a lion. This spell was to protect the dead from being disturbed, and it linked her to Bast, Sekhmet and the sun. In this form she was called both Mut, but addressed as Sekhmet-Bast-Ra.

When she started to take over the positions of other goddesses, her name was linked to the older goddess' - such as Mut-Temt, Mut-Wadjet-Bast and Mut-Sekhmet-Bast-Menhit. She also started to take on the aspects and attributes of Isis, such as Mut's form of Mut-Isis-Nekhbet. She seems to have also taken the attributes of even the sky goddess Nut, mother of the five deities - Osiris, Horus the Elder, Set, Isis and Nephthys.

I have given unto thee the sovereignty of the father Geb, and the goddess Mut, thy mother, who gave birth to the gods, brought thee forth as the first-born of five gods, and created thy beauties and fashioned thy members.

- The Book of the Dead

When Amen was assimilated with Ra, becoming Amen-Ra, Mut took on the title the Eye of Ra, a form associated with Hathor and Sekhmet, among others. The Eye was usually shown as a lioness, representing the fierce heat of the sun, and so Mut was given the form of a lion headed woman. She was then thought to be the daughter of Ra, yet she was also "Mother of the Sun in Whom He Rises" - she was thought to be the mother of mothers, and thus could be both the mother and daughter of the sun god.

The 'Mistress of Isheru' (the sacred lake around her temple) had a large temple mostly built by Amenhotep III. The earliest parts of the temple, though, were built by pharaohs Hatshepsut and Thothmose III. Later rulers such as Rameses II, Rameses III and King Taharqa of the Kushite 25th Dynasty added to the Mut Precinct, expanding the precinct and rebuilding the temple. (Rameses II's wife, Nefertari, was called Nefertari Merytnmut - 'Nefertari, Beloved of Mut'.) The temple of Mut continued to prosper during the Ptolemaic period, right through to the conquest of Egypt by Rome in about 30 BC. By the late Roman period, the temple of Mut was no longer in use, and started to fall into disrepair.

The temple, Hut-Mut hwt-mwt ,was situated to the south of the great temple of Amen-Ra, with an avenue of sphinxes approaching her temple. She was worshiped there as "Mut, the Great Lady of Isheru, the Lady of Heaven, the Queen of the Gods". Mut was believed to have existed since primeval times, existing along side Nun, the primeval waters. This was probably due to her replacement of Amaunet, one of the primeval Ogdoad - the great eight - who lived in the waters. In her temple she was depicted in the form black basalt statues, showing Mut as the Eye of Ra, Sekhmet.

The precinct of Mut lies about 100 yards south of the precinct of Amen to which it is oriented, and covers an area of about twenty acres. The focal point of the complex is the temple of Mut itself, surrounded on three sides by a lake called the Isheru, a term used to describe sacred lakes specific to precincts of goddesses who can be leonine in form. The Mut Precinct's Isheru, fed probably by an underground spring, is the largest in Egypt that is preserved.

The Mut expedition also uncovered a gate in an early western enclosure wall that bares traces of a possible graffito of Senmut, an important official under Hatshepsut, and the cartouches of Thothmose III (perhaps replacing Hatshepsut's cartouche), an Amarna period effacement of the name of Amen, and an inscription by Seti I recording the restoration of the gate.

Despite the evidence of early 18th Dynasty activity at the site, many publications continue to identify the Mut temple as a work of Amenhotep III, primarily because of the many statues of the goddess Sekhmet found at the site that bear his name. However, it is now thought that the Sekhmet statues bearing the king's name were originally erected in his funerary temple on the west bank of the Nile. They were probably brought to the Mut Precinct during 19th Dynasty when Mut and Sekhmet became more closely associated and rituals involving both with the Isheru first appear to have gained prominence.

- The Precinct of The Goddess Mut 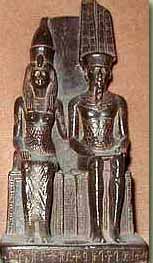 She was also worshiped in Djannet (Tanis), Zau (Sau, Sai, Sais), the Oases of Kharga and Dakhla. Her followers believed her as the great mother, the one who created and brought forth everything that existed. This was probably why she was sometimes depicted with male parts - she was not just one who gave birth to life, she was one who conceived life itself. She was "Mut, Who Giveth Birth, But Was Herself Not Born of Any". Another reason why Mut may have been seen as being able to have conceived by herself was the ancient Egyptian believe that there were no male griffon vultures (the vulture of the Egyptian goddesses and royalty). (This vulture (Gyps fulvus) has no significant markings between the female and the male of the species.) They believed that this bird conceived with the wind.

The great mother goddess of the New Kingdom, Mut replaced or assimilated many of the Egyptian goddesses. She became a great, all-in-one goddess of the capital city, and her popularity spread. Although possibly a local goddess from the delta, she was married to Amen, replacing his original wife. She came to represent the mother of the pharaoh, the royal crown being her symbol, and firmly established her place with the rulers of Thebes. From there, she became one of Egypt's great goddesses, worshiped through the land from the New Kingdom well into Roman times. Both male and female, her followers believed her to be the one who created and gave birth to all.