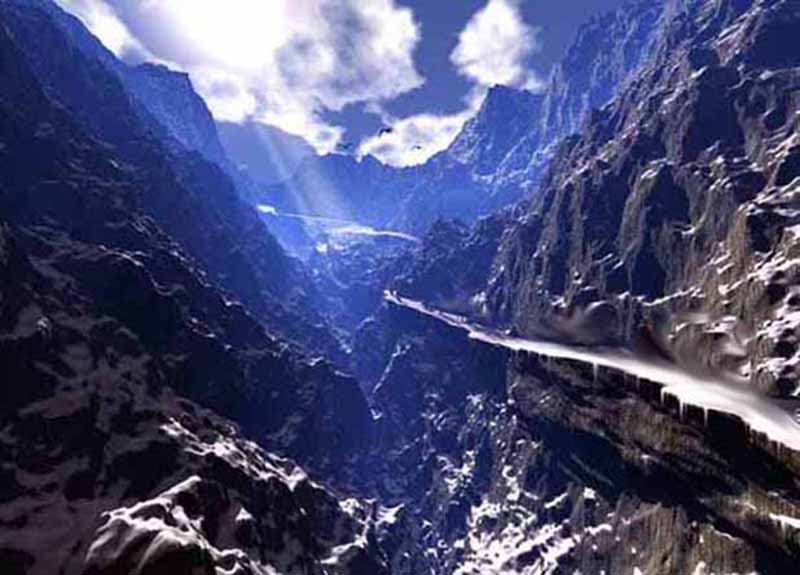 A mountain is a large landform that stretches above the surrounding land in a limited area, usually in the form of a peak. A mountain is generally steeper than a hill. Mountains are formed through tectonic forces or volcanism. These forces can locally raise the surface of the earth. Mountains erode slowly through the action of rivers, weather conditions, and glaciers. A few mountains are isolated summits, but most occur in huge mountain ranges.

High elevations on mountains produce colder climates than at sea level. These colder climates strongly affect the ecosystems of mountains: different elevations have different plants and animals. Because of the less hospitable terrain and climate, mountains tend to be used less for agriculture and more for resource extraction and recreation, such as mountain climbing.

Andes - Birthplace of Earth's Continents Discovered Under These Mountains   Live Science - January 31, 2019
Earth's continents may have been born under large mountain ranges like the Andes. New research combining a mysterious missing trace element, a 66-million-year-old rock burped up by an ancient volcano, and a database of all the rock chemistry analyzed by scientists in the past century explains why Earth has continents. A study suggests that where mountains are born, so are continents.


How A Fake Mountain Range Slowed Down Arctic Exploration   Atlas Obscura - March 9, 2018
On August 31, 1818, the Arctic explorer John Ross was called away from his dinner and onto the deck of the ship he commanded, the Isabella. Ross and his crew were moored in Baffin Bay, just south of Greenland, seeking a way through to the Arctic sea beyond. All day, they had been waiting for the fog to clear, so they could take a look around and try to find it. Ross stepped out onto the deck and began scanning the horizon: ice, more ice, and, in between, an imposing set of peaks. I distinctly saw the land, round the bottom of the bay, forming a connected chain of mountains with those which extended along the north and south sides, he wrote soon after. There was, he concluded, no way through.


Andes Glaciers Vanishing Rapidly, Study Finds   Live Science - January 22, 2013
The glaciers of the Andes Mountains have retreated at an unprecedented rate in the past three decades, with more ice lost than at any other time in the last 400 years. That's according to a new review of research that combines on-the-ground observations with aerial and satellite photos, historical records and dates from cores of ice extracted from the glaciers. The retreat is worse in the Andes than the average glacier loss around the world.

Undersea mountains march into the abyss   BBC - December 6, 2011
Startling new images from the depths of the Pacific Ocean reveal one of Earth's most violent processes: the destruction of massive underwater mountains. The pictures were created by sonar in waters up to 6km (4mi) deep. They expose how tectonic action is dragging giant volcanoes into a chasm in the seabed. The volcanoes are strung across several thousand kilometres of ocean floor and are moving westward on the Pacific tectonic plate at up to 6cm per year. The extraordinary scene was captured along the Tonga Trench during a research expedition last summer.


World's highest webcam brings Everest to Internet   PhysOrg - October 6, 2011
The world's highest webcam has been installed in the Nepalese Himalayas, beaming live images of Mount Everest back to scientists studying the effects of climate change on the planet's tallest peak.


New insights on the origin of the Rocky Mountains   PhysOrg - March 1, 2011
The formation of the Rocky Mountains in Colorado has always puzzled scientists. Some 600 miles inland and far removed from the nearest tectonic plate, the only comparable inland mountain range is the Himalaya, which scientists deduced were formed by the collision of the Indian plate with the Eurasian plate.


Marine scientists unveil the mystery of life on undersea mountains   PhysOrg - September 20, 2010
They challenge the mountain ranges of the Alps, the Andes and the Himalayas in size yet surprisingly little is known about seamounts, the vast mountains hidden under the world's oceans. Now in a special issue of Marine Ecology scientists uncover the mystery of life on these submerged mountain ranges and reveal why these under studied ecosystems are under threat.


Data to expose 'ghost mountains'   BBC - December 19, 2009
Scientists who mapped one of the most enigmatic mountain ranges on Earth have given a first glimpse of their data. An international team spent two months in 2008/9 surveying the Gamburtsevs in Antarctica - a series of peaks totally buried under the ice cap.The group has told a major conference in the US that the hidden mountains are more jagged than previously thought. They are also more linear in shape than the sparse data collected in the past had suggested. This latter finding hints at a possible origin for the mountains whose existence has perplexed scientists for 50 years.


Snow at Highest Elevations No Longer Pure   Live Science - December 10, 2009
The pure white snow atop the Andes Mountains may not be so pure after all. Scientists have found traces of toxic pollutants called PCBs in snow samples taken from Aconcagua Mountain, the highest peak in the Americas


Andes mountains: White, but not pure   PhysOrg - December 7, 2009
> Even the snow on Aconcagua Mountain in the Andes is polluted with PCBs. An international team of researchers detected low concentrations of these toxic, carcinogenic chlorine compounds in samples taken from America's highest mountain. The snow samples taken at an altitude of 6200 metres are among the highest traces found anywhere in the world of these substances, which have been banned since 2001. In particular, the samples contained more persistent compounds like hexachlorobiphenyl (PCB 138) and heptachlorobiphenyl (PCB 180). Mountain ranges could be a natural trap for persistent organic pollutants that are transported by the atmosphere all over the world, say the scientists from IIQAB in Barcelona (Now IDAEA), the UFZ in Leipzig and the University of Concepcion in Chile, writing in the journal Environmental Chemistry Letters. According to the researchers, these findings highlight the need to investigate further the role of mountains in the spread of these pollutants and the associated risks. Just a few weeks ago, Swiss researchers found similar persistent environmental pollutants in glacial lakes in the Alps and pointed to potential risks to drinking water supplies.