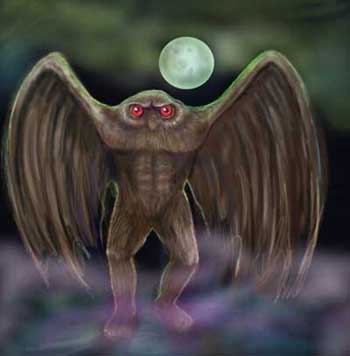 In West Virginia folklore, the Mothman is a legendary creature reportedly seen in the Point Pleasant area from November 12, 1966, to December 15, 1967. The first newspaper report was published in the Point Pleasant Register dated November 16, 1966, titled "Couples See Man-Sized Bird ... Creature ... Something". The national press soon picked up the reports and helped spread the story across the United States.

The Mothman was introduced to a wider audience by Gray Barker in 1970 and later popularized by John Keel in his 1975 book The Mothman Prophecies, claiming that there were supernatural events related to the sightings, and a connection to the collapse of the Silver Bridge.

The Mothman is the subject of regional folklore and popular culture. The 2002 film The Mothman Prophecies, starring Richard Gere, was based on Keel's book. An annual festival in Point Pleasant is devoted to the Mothman legend. Read more

In 1997, The X-Files dealt with a Mothman-like creation in an episode called Detour in which Mulder and Scully track down an intelligent predator. While en route to a communications seminar in Florida, Mulder takes an opportunity to stretch his legs while waiting at a police road block. He soon discovers that several people are missing and presumed dead and the suspected culprit is not your ordinary animal or serial killer. Tracks at the scene of the mysterious disappearances do not match any known animal or human print. No bodies are found and eyewitness testimony suggests the victims vanished without a trace right before their very eyes.

Mulder decides to take advantage of this convenient X-Files case to avoid the seminar. As he begins to research into the culling behavior of predator animals, he has a disturbing revelation. The predators most likely responsible for the disappearances are highly intelligent, unafraid and motivated.

In order to gather more information about the predator's behavior, he goes to the house of a victim's family to ask more questions. He arrives just moments after an attack by not one, but two creatures. The description given to him by a small boy, the target of the attack, leads Mulder to believe that what they are dealing with may be Mothmen.

Mothmen are strange creatures of American folklore, not unlike Puerto Rico's Chupacabra "the Goatsucker," the Jersey Devil, or the Thunderbird to Native Americans. They all have something in common. All the aforementioned creatures can fly. Unlike the X-Files version of the Mothman, reports are scattered throughout the decades of a larger-than-man creature that can fly as fast as a car can drive, whose enormous eyes glow a fiery red.