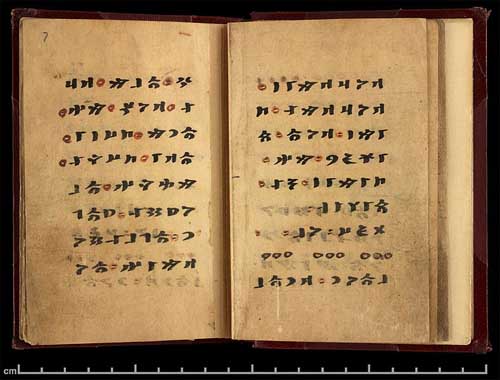 There is no singular Mongol account of the creation and the beginning of the world, but from a variety of accounts from Mongol tribes of Central Asia, a general outline can be made. The creation of the world is attributed to a lama named Udan who is sometimes also conflated with God or Buddha Sakyamuni by the tribes influenced by Tibetan Buddhism.

The primordial world is usually described as being covered in darkness with no separation between earth and sky. The construction of the cosmos proceeds in a variety of fashions. One account describes ninety-nine golden columns holding apart the sky and earth. In this description the world has three stories, the upper one being heaven where gods and goddesses live, the middle one being earth where man dwells, and the lower one being the place where man goes after death; heaven (sky) is the father and earth is the mother of man, animals, etc.

Another narrative recounts that when the creator divided the heaven and earth he created a nine-story heaven, a nine-story earth, and nine rivers. In some accounts, the world first was a vast ocean, but dust and sand rose to cover the ocean surface and become earth. In another account, the land is placed on the back of a golden frog who was pierced with arrows causing fire and water to spew from him at various places.

After the creation of the Earth itself, the first male and female couple were created out of clay. They would become the progenitors of all humanity. The various tribes and peoples were placed there with different characteristics. In the north, the men were paired with ewes as sexual mates and this was the spawn of the Mongol ethnicity while the Han Chinese were the spawn of hens while the Dorbed and the Buryat recount that they are the descendants of a coupling between hunters and Swan Maidens.

Another account tells that in the beginning, seven suns rose in the sky so that the rivers and vegetation on earth dried up, so the people asked the archer Erkei-Mergen to shoot the suns out of the sky. The archer shot down six, but while he was taking aim at the seventh a martin flew in front of the sun and was shot in the tail. From then on, the martin had a forked tail and there was a single sun remaining in the sky. The archer was so distressed that he fled to the steppe, cut off his thumbs in shame, and became the ancestor of the marmot.

Long ago Father Heaven had two sons, Ulgen Tenger and Erleg Khan, Ulgen became the lord of the upper world and Erleg Khan became the lord of the lower world. At that time the earth was covered with water, there was no land. Ulgen Tenger asked the loon to bring up mud from below the water to create land, he was not able to do so, and he was punished by having his legs broken so he could not walk, and the goldeneye duck was called next to bring up land. The duck created a small piece of land that Ulgen was able to lay on. Erleg Khan seeing that his brother had fallen asleep on the new land, tried to pull the land out from under him, but instead the land stretched out in all directions as he pulled it.

Next, Ulgen Tenger created animals and humans out of mud and he spread them out to dry. He created the dog to keep watch over the bodies of the new humans while he was gone. Erleg Khan, unhappy to see that his brother was creating humans, came to see the new bodies. The dog would not let him come close, at that time the dog could talk but had no fur. It was cold, and snowing, so Erleg Khan tempted him, saying that if the dog allowed him to see the humans' bodies he would give him a beautiful fur coat. The dog agreed, and was given a shiny beautiful coat. Erleg Khan then spat on the bodies so that humans would have diseases and not be immortal. When Ulgen returned he saw that the dog had fur and that the humans had been damaged, so he punished the dog by making his coat smelly, taking away his voice, and by making the dog follow humans in order to get its food.