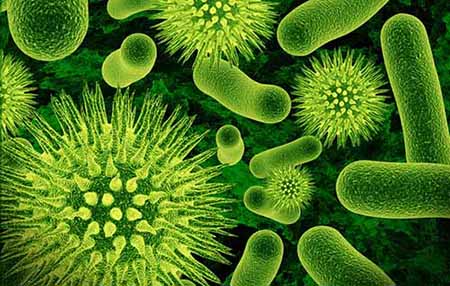 Microorganisms are found in virtually every habitat present in nature. Even in hostile environments such as the poles, deserts, geysers, rocks, and the deep sea, some types of microorganisms have adapted to the extreme conditions and sustained colonies; these organisms are known as extremophiles. Some extremophiles have been known to survive for a prolonged time in a vacuum, and some are unusually resistant to radiation. Many types of microorganisms have intimate symbiotic relationships with other larger organisms; some of which are mutually beneficial (mutualism), while others can be damaging to the host organism (parasitism). If microorganisms can cause disease in a host they are known as pathogens.

Microorganisms are used in brewing, baking and other food-making processes. They are also essential tools in biotechnology and the study of biochemistry, genetics and molecular biology. They can also be harmful as a significant cause of human disease, and some have uses as biological weapons. Microorganisms have an important place in all ecosystems and in most higher-order multicellular organisms (as symbionts). They are vital to the environment, as they participate in the Earth's element cycles (such as the carbon cycle and nitrogen cycle). They are also involved in the recycling of other organisms' dead remains and waste products. Read more ...

Microbes in The Ocean Depths Can Make Oxygen Without Sun. This Discovery Could Be Huge   Science Alert - January 11, 2022
For most of life on Earth, oxygen is essential, and sunlight is usually needed to produce that oxygen. But in an exciting twist, researchers have caught a common, ocean-dwelling microbe breaking all the rules.


Microbes may have lived in the underground for more than a billion years   PhysOrg - November 1, 2021
The deep, dark, and anoxic fracture systems of the Precambrian cratons on Earth are home to microorganisms that get their energy from consumption of gases, nutrients in fluids, and sparsely available organic carbon. Most current estimates show that this deep biosphere hosts the majority of microbial life on Earth, and about 10-20% of all terrestrial biomass.


Missing Antarctic microbes raise thorny questions about the search for aliens   Science News - August 11, 2021
Even in the harshest environments, microbes always seem to get by. They thrive everywhere from boiling-hot seafloor hydrothermal vents to high on Mt. Everest. Clumps of microbial cells have even been found clinging to the hull of the International Space Station. There was no reason for microbial ecologist Noah Fierer to expect that the 204 soil samples he and colleagues had collected near Antarctica's Shackleton Glacier would be any different. A spoonful of typical soil could easily contain billions of microbes, and Antarctic soils from other regions host at least a few thousand per gram. So he assumed that all of his samples would host at least some life, even though the air around Shackleton Glacier is so cold and so arid that Fierer often left his damp laundry outside to freeze-dry.


These Bizarre Underground Microbes Haven't Evolved For 175 Million Years   Science Alert - April 10, 2021
A genetic analysis of microbes of the species Candidatus Desulforudis audaxviator (CDA) collected from three different continents has revealed that the bacterium has barely evolved since they were last together on the same land mass, Pangaea. That means they have been in what scientists call 'evolutionary stasis' for at least 175 million years, making CDA the only known subterranean living microbial fossil. This could have important implications for our understanding of microbial evolution.


Secrets of Antarctic lake's microbes revealed   PhysOrg - August 11, 2020
In the paper, Prof Cavicchioli and team show how these microbes have adapted to the polar light cycle. The researchers found that two types of microbes - green sulfur bacteria (GSB) and cyanobacteriaŃwere most abundant in the lake, and that they were highly influenced by light availability. The GSB decreased in numbers in winter and bounced back to higher levels in spring.


Antarctic Microbes Can Survive on Air Alone   Live Science - December 14, 2017
Talk about an extreme diet. Antarctic microbes are capable of surviving on air. Soil microbes that live in polar deserts must contend with extremely dry conditions, nutrient-poor dirt and 24-hour darkness for half the year. Now, a genetic study of some of these microscopic survivors reveals that they pull it off by gleaning trace gases right out of thin air. This new understanding about how life can still exist in physically extreme and nutrient-starved environments like Antarctica opens up the possibility of atmospheric gases supporting life on other planets.


Did Microbes Shape the Human Life Span?   Live Science - December 24, 2014
The microbes that live in and on humans may have evolved to preferentially take down the elderly in the population, a new computer model suggests. That, in turn, could have allowed children a greater share of food and resources, thereby enabling an extended childhood. Such a microbial bias may also have kept the first human populations more stable and resilient to upheavals, the findings suggest.


Microbes to be 'last survivors' on future Earth   BBC - July 2, 2013
The last surviving creatures on Earth will be tiny organisms living deep underground, according to scientists. Researchers used a computer model to assess our planet's fate billions of years from now. They found that as the Sun becomes hotter and brighter, only microbes would be able cope with the extreme conditions that the solar changes would bring.


Super microbe's life code cracked   BBC - January 10, 2005
Experts have deciphered the complete DNA sequence for one of the most infectious germs known to science. The Francisella tularensis bacterium is a candidate bioterror weapon, as it takes just 10 microbes to bring on disease in humans. The genome sequencing work is already speeding up the search for a vaccine against the potentially deadly bug.