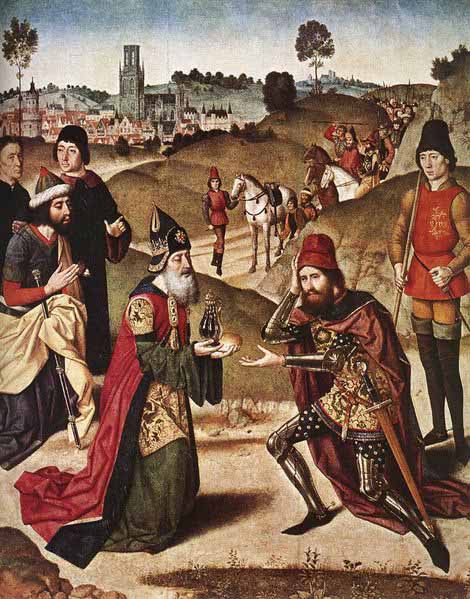 Melchizedek is a character in the Old Testament who appeared in Genesis to the patriarch Abraham. He is called "king of Salem" (believed to be ancient Jerusalem) and "priest of the most high God" in Genesis 14:18.

In the Tanakh, Melchizedek brought bread and wine to Abraham (then called Abram) after Abraham's victory over the four kings who had besieged Sodom and Gomorrah and had taken his nephew Lot prisoner (described in Genesis 14). (Gen. 14:18.) Melchizedek blessed Abraham in the name of God Most High, Creator of heaven and earth. (Gen. 14:19.) In return, Abraham gave Melchizedek a tenth, a tithe, of the spoils gained from the battle. (Gen. 14:20.)

In some translations, Psalm 110:4 names Melchizedek as representative of the priestly line through which a future king of Israel's Davidic line was ordained. Alternatively, the term in Psalm 110:4 can be read 'rightful king.' (E.g., New JPS Tanakh.)

The Rabbis said that Melchizedek instructed Abraham in the Torah. (Genesis Rabbah 43:6.)

Rabbi Eleazar said that Melchizedek's school was one of three places where the Holy Spirit manifested itself. (B. Talmud Makkot 23b.)

The Rabbis taught that Melchizedek acted as a priest and handed down Adam's robes to Abraham. (Numbers Rabbah 4:8.)

The Talmud teaches that David wrote the Book of Psalms, including in it the work of the elders, including Melchizedek (in Psalm 110). (B. Talmud Baba Batra 14b-15a.)

The Zohar finds in 'Melchizedek king of Salem' a reference to 'the King Who rules with complete sovereignty,' or according to another explanation, that 'Melchizedek' alludes to the lower world and 'king of Salem' to the upper world. (Zohar, Bereshit, 1:86b-87a:)