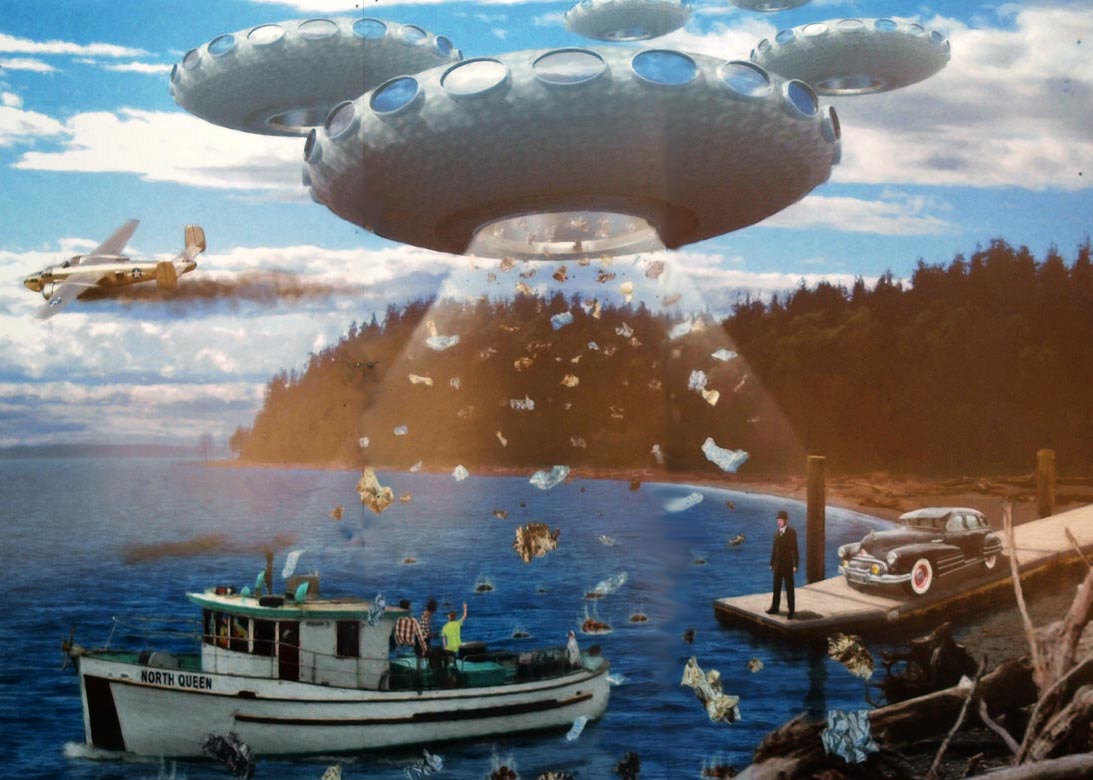 The Maury Island Incident is said to be an early modern UFO encounter incident, which allegedly took place on June 21, 1947, shortly after the sighting of alleged flying saucers by American aviator and businessman Kenneth Arnold. It is also one of the earliest reported instances of an alleged encounter with so-called "Men in black". 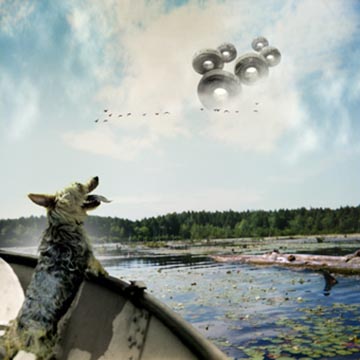 A few days earlier, seaman Harold Dahl, out scavenging for drifting logs, claimed to have seen six UFOs near Maury Island - which is now a peninsula of Vashon Island, in Puget Sound, near Tacoma, Washington. Dahl, his son, and their dog were on the boat. Dahl claimed to have taken a number of photographs of the UFOs, and reported that one UFO shed some type of hot slag on to his boat. The slag, he said, struck and killed his dog and injured his son.

The next morning, Dahl reported, a man arrived at his home and invited him to breakfast at a nearby diner. Dahl accepted the invitation. He described the man as imposing at over six feet tall and muscular, and wearing a black suit. The man drove a new 1947 Buick, and Dahl assumed he was a military or government representative.

While the two men ate, Dahl claimed the man told him details of the UFO sighting, though Dahl had not related his account publicly. The man also gave Dahl a nonspecific warning which Dahl took as a threat that his family might be harmed if he related details of the sighting. Some confusion and debate over Dahl's statements have occurred. Dahl would later claim the UFO sighting was a hoax, but has also claimed the sighting was accurate, but he had claimed it was a hoax to avoid bringing harm to his family.

In spite of the threat, Dahl had reported the incident to his employee at his sawmill operation, Fred Crisman, who had long claimed to have experience with unusual phenomena (and who was later alleged to be linked to the John F. Kennedy assassination) and who also was the owner, or co-owner, of the boat used by Dahl. Crisman and Dahl also had a joint-venture to retrieve drifting logs from Puget Sound as a source of raw lumber. Crisman sailed to the island the following day and said he spotted a craft briefly, but it went behind a cloud. He gathered more of the slag which he found littering the beach area. He then sent a sample to Chicago with a request it be tested. According to the FBI report, Crisman either sent it to Ray Palmer, science fiction writer and editor of Amazing Science Fiction, or sent it to a friend at the University of Chicago who failed to identify the material and then sent it on to Ray Palmer. 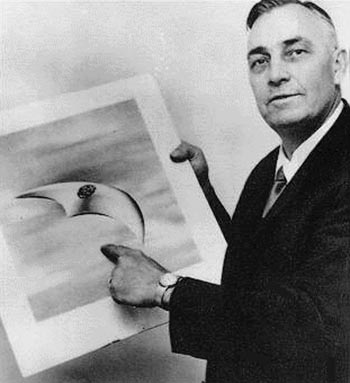 While the "rock formation" was being passed around in Chicago, the famous sighting by Kenneth Arnold took place at Mount Rainier in Washington state. Palmer contacted Arnold and asked him to investigate the incident for the story Arnold was writing for one of Palmer's publications (the FBI report states Palmer was the editor of the magazines Venture and Fantacy at this time, although both Venture Science Fiction Magazine and The Magazine of Fantasy and Science Fiction first appeared long after the incident. Palmer inaugurated the first issue of Fate magazine in January, 1948 with a cover featuring flying disks and the article he paid Kenneth Arnold to write.

Arnold flew from Boise, Idaho, to Tacoma and met with Crisman, Dahl and at least three military intelligence officers at the Winthrop Hotel there. During the meetings over several days, an unknown person (the FBI agent who wrote up the main report on the incident believed Crisman was the most likely suspect) began leaking details of the UFO sighting at Maury Island, the meeting in the hotel room and details of the conversation there to reporters at the Tacoma Times and at United Press, the latter reporter also working for Tacoma News Tribune. The anonymous caller also contacted the Seattle Post-Intelligencer and the Boise Statesman.

The two United States Army Air Corps investigating officers who arrived at Arnold's request, Captain William L. Davidson and Lietuenant Frank M. Brown of Army A-2 Intelligence, decided to fly back to Hamilton Field the same day they arrived in Tacoma after interviewing Crisman in the hotel room. Dahl had decided to leave, citing possible danger to himself if the story got out, presumably because of the warning he received from the man in black previously.

The two intelligence officers said they had to return to Hamilton Field in California quickly because the next day was Air Force Day, when the Air Force officially became a new service branch distinct from the Navy, Marines and Army. As the investigators were preparing to leave, Crisman produced samples of the "rock formation" from his automobile and gave it to the investigators to take back to California. The plane carrying the two investigators and the slag crashed near Kelso, Washington, shortly after leaving Tacoma, killing both men.

In April 2007 it was reported that the crash site had been rediscovered and some material recovered, although the initial military investigation did recover exhibits and remove the bodies. The FBI report notes that investigators from McChord Field near Tacoma had investigated the wreckage and were convinced there was no sabotage involved. The FBI report further mentions that two other people on board the airplane survived by parachuting from the airplane after it lost its left wing and the tail section due to a fire in the left engine. One of the survivors was named as a member of the flight crew and the other was referred to as "a hitch-hiker." The Seattle Post-Intelligencer identified them as Sergeant Elmer L. Taft and Technical Sergeant Woodrow D. Matthews. Initially the Air Force denied the men had been carrying a secret cargo, but in later years admitted that they had been officially investigating the Dahl report.

Crisman alerted Arnold of the crash early the next morning and Dahl and Crisman returned to the hotel to discuss the situation with Arnold. Arnold had invited another person, accidentally identified in the FOI copy of the FBI report as a Mr. Smith of Seattle (probably Captain E. H. Smith (elsewhere E. J. Smith) of United Airlines, identified in the Seattle Post-Intelligencer article under External links below), to Tacoma to attend the UFO conference, and this informant related to the FBI field agent that a Mr. Lantz (elsewhere identified as Paul Lance) of the Tacoma Times contacted Arnold at the hotel and informed him of the leaks, including information that the Army intelligence officers had been shot down in the B-25 airplane over Kelso by 20 mm cannon, and that a Marine airplane whose wreck had allegedly been found earlier at Mt. Rainier had also been shot down with the same weapon.

The anonymous caller claimed knowledge of on-going investigations by military intelligence. He was not identified but claimed to be a switchboard operator. Mr. Smith informed the FBI the switchboard operator at the Winthrop Hotel in Tacoma was not a male. The anonymous caller also said he was not interested in providing a scoop to any certain media outlet but wanted the news "to get back to New Jersey."

The ad hoc group in Tacoma in 1947 also decided to sail to Maury Island. This plan failed when the boat failed to start. Asked where the UFO had damaged the boats, Crisman pointed to the windshield, the klaaxon and a light. Smith told the FBI there were signs of recent repair to these parts.

Alarmed by the deaths, Dahl disappeared, although the FBI report mentions his son, allegedly injured by the slag from the malfunctioning UFO, had run away from home to Montana for some reason. The anonymous caller informed the press that one of the two witnesses would shortly be sent to Alaska. Crisman, a WWII veteran, was recalled to service hastily and sent to Alaska (A UFO was spotted northwest of Bethel, Alaska on August 4 by Captain Jack Peck and copilot Vince Daly from a Douglas DC-3 they operated for Al Jones flying service and was reported to the headquarters of the Fourth Air Force in Hamilton, California and the Air Defense Command commander at Mitchell Field in New York.), then posted to Greenland (Thule Air Force Base figures in Milton William Cooper's "Behold a Pale Horse" as a Majestic 12/Operation Majority control terminus).

Arnold found himself unable to complete the story for Palmer. Samples of the slag provided to Arnold and Palmer also allegedly went missing. Arnold was allegedly advised by Ted Morello of the United Press: "You're involved in something that is beyond our power here to find out anything about... Get out of this town until whatever it is blows over.".

Arnold decided to fly home. He stopped for fuel in Pendleton, Oregon, and shortly after taking off again, his engine froze in mid-air. He managed to land the plane safely despite the emergency.

Paul Lance of the Tacoma Times died within two weeks of undetermined causes.[8] United Press stringer Ted Morello moved to New York and until his death due to a stroke on September 15, 2007, at the age of 88, was a well-respected newspaper correspondent to the United Nations.

Some believe that the famous case of another allegedly disabled UFO, the Roswell UFO incident, took place about 12 days after Dahl's sighting, although various dates circulate among Roswell investigators and the chronology is less certain than that for the Maury Island Incident.

The story of the mysterious crash of the B-25 and the death of the two men investigating the "disk case" who allegedly had a "top-secret cargo" or even "saucer parts" was carried by the wire services and published by newspapers locally and nationally.

Albert K. Bender later seized on Dahl's story, and printed it in his newsletter. In 1953, Bender claimed three men in black visited him, and warned him to stop his UFO research, which he did for a decade, closing down his International Flying Saucer Bureau. In 1963 Bender published his story, *Flying Saucers and the Three Men*, placing him beyond the pale of even the UFO research community because of his claims about men in black. 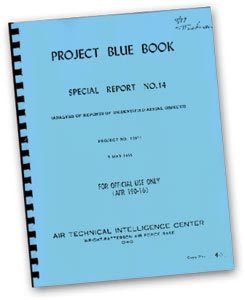 Capt. Edward J. Ruppelt, chief of Project Blue Book in the early 1950s, wrote that he was convinced that the entire sighting story was a hoax. The initial FBI field report concluded the story was a hoax as well. In the FBI report the anonymous caller mentioned an incident involving a United Airlines pilot and his co-pilot flying over Montana and coming under fire.

United Airlines pilot E. H. Smith, the likely identity of the main informant in the FBI report and a key figure in the meetings at the Winthrop Hotel in Tacoma, was named as witnessing a UFO event over Boise several weeks prior (on July 4, according to the FBI report) to the crash of the B-25 near Kelso, Washington, according to an Associated Press dispatch with the dateline of San Francisco, August 2, "2 Flyers died in Crash on 'Disc' Mission".

To some in the UFO community, the Maury Island Incident is still highly controversial, dismissed by many as a complete fabrication by the wildly imaginative and conspiracy-obsessed Crisman, while others think it may be among the most important encounters in modern times.

Others speculate that the incident, although clearly a hoax, was employed by the US government to draw public attention away from claims hazardous waste from a breeder reactor located in Hanford was being secretly and unlawfully dumped on Maury Island.