Mars was the God of war in Roman Mythology.

The Son of Juno, he was the father of Romulus (Rome's founder).

His earliest form was a god of the spring and agriculture, responsible for vegetation, fertility and cattle.

His major festival was the Quinquartrus, five days of celebrations during the spring equinox, in both his and Minerva's honor.

Mars soon evolved into a god of war, with many of his agricultural duties turned over to Ceres and Liber, although every May 29th festivals of the Ambarvalia celebrated him as an agricultural god, with a pig, ram and bull sacrificed to him.

Ares is the Greek god of war. He was later identified with the Roman war god, Mars.

Ares is the son of Zeus and Hera.

Ares had no wife, but had three children by Aphrodite, the Goddess of Love.

The twins, Phobos, panic, and Deimos, fear, always accompanied him on the battlefield.

Phobos and Deimos are the two moons of Mars.

Ares is seen wearing full armor in the above photo.

The names of the physical features on Mars are all Latin or Greek.

Mars as we know it today comes from the Roman word for the planet.

Mars is named for the Roman god of war because of its color--red--the color of blood. 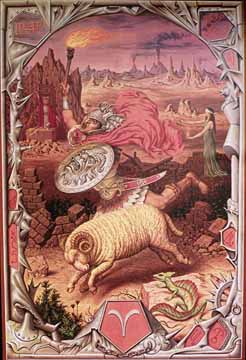