The Spirit of Marcus 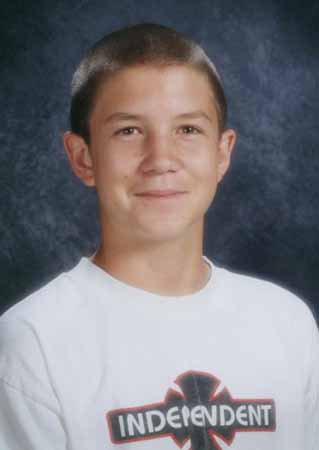 The theme of my readings during the month of February 2003 has been birth, rebirth and children.

Every now and again I read someone whose journey is so powerful, it is meant to be shared with readers who have had the same experience, the loss of a child, and need to read about the journey of another who has experienced this great loss. In this case it is about the loss of a child, 12 year old Marcus, who was hit by a car in January 2002 and crossed over 12 days later.

Marcus' family lives in southern California. The accident occurred when a woman driving a car who turned around to attend to her baby in the back seat. Her car swerved out of control and hit Marcus.

Marcus' father, Ben, came to see me for a reading and to share with me what has transpired in the year since Marcus had died. As you know, I talk to souls who have crossed over. Marcus and I shared a spiritual journey along with his father as we sat here talking.

Marcus arrived in my home hours before his father. Marcus was great kid, in school and at home, not one of the 12 year olds with an attitude problem. The family is well adjusted and loving. Marcus was the oldest child, leaving behind two brothers and a sister.

Ben is able to communicate with Marcus just as I do. He knew just where Marcus stood in the room. It helps to understand the path of soul and the continuity that happens after the soul leaves the physical body and crosses over. Marcus has gone on to help children cross over, those who have been killed in tragic accidents. He appears in dreams and brings messages to family and friends. Most of the dreams share his love of family and the knowing that he is okay and has found himself on the other side. It is also a sharing that he remains close by the family.

Marcus has manifested in the house for his mother and his brother Matthew.

When his other brother, Adam, was injured in a fall off a fence in 2002, his mother saw Marcus leaning over him. He showed me that is was an act of healing.

A while after Marcus died, his dog, Duke, got sick and crossed over. This is not uncommon especially as so many pets are crossing over these days. In February the family got a new dog, Duke 3, a puppy of 6 weeks old. They gave the puppy a plastic banana. Marcus' mother, Michelle, put it in the dog carrier where the puppy stays most of the time. The morning she put the banana in the carrier, Ben went to look for it as he was taking the puppy to the vet for shots and wanted to take the banana so the puppy would have something to chew on. But the banana was not there. Somehow they found the banana in a chair with a bunch of stuffed animals. No one knows who moved it and how it got there. Did Marcus move it?

Sometimes Ben's phone rings but no one is on the other end. He knows it is Marcus wanting to communicate and just saying, "Hi!"

Marcus showed me dice and a roulette wheel. Ben explained that Marcus lead him to Vegas for a bit of fun. Ben won $4800 at a slot machine!

The family has in many ways accepted the fact that Marcus came in for a short time and that it was his destiny to leave. His father believes that he came in to teach his parents how to be parents. Grief Counseling has helped the family heal from this loss and continues. Sharing with other parents can be helpful to some parents while others are more private in their mourning.

Marcus sensed his time was coming as many of us do before we cross over.

Marcus remains in the hearts of all who knew and loved him during his short journey in third dimension. I will not forget him.

I cannot imagine not being able to communicate with the other side for those who lose children and have no way of knowing that they are okay. The spirits of children generally try to find a way of letting the parents know that they are safe.

There are the noisy spirits who let you know they are around by telekinesis. They put messages on computers, move objects, smells, cold winds blow, touches to the body, things that go missing for a while show up some time later usually belonging to the person who has crossed over, etc. Pay attention and you will recognize what is being shown. Our children are with us.


Ben Bayne wrote a poem after Marcus crossed over. He had never written a poem before and did not know much about writing. The poem just came to him as if guided by spirit. He wrote half one day then completed the poem the next day.

I once had a baby boy so strong and able
He turned into a boy so smart and stable
He was so special everyone knew
But as time went on time just flew.

We knew this boy was special
He was just put here as an angel
For his family to adore
And for his friends too
Boy this boy just grew.

This boy touched so many
That God only knew
That the boy was so special
And he loved him too.

So at an early age God
Had to turn the page
For God knew he was an angel too.
So as his family and friends grieve
And as fast as he would flee
This boy who turned into a young man

We all know what was in God's plan.
God needed help in heaven so
He called on my boy for help
And we know he can
Because it was in Gods plan.