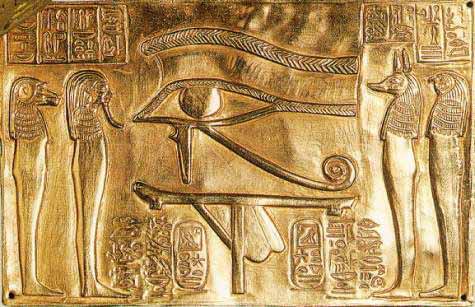 In the Golden Alchemy of Time 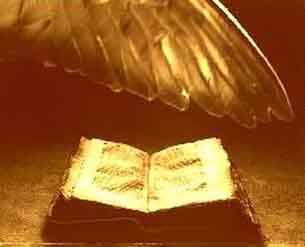 The Knights Templar, the medieval Christian military order accused of heresy and sexual misconduct, will soon be partly rehabilitated when the Vatican publishes trial documents it had closely guarded for 700 years. A reproduction of the minutes of trials against the Templars, "'Processus Contra Templarios -- Papal Inquiry into the Trial of the Templars"' is a massive work and much more than a book. "This is a milestone because it is the first time that these documents are being released by the Vatican, which gives a stamp of authority to the entire project. Nothing before this offered scholars original documents of the trials of the Templars", said Professor Barbara Frale, a medievalist at the Vatican's Secret Archives. 799 numbered copies of the work have been made.

One parchment measuring about half a meter wide by some two meters long is so detailed that it includes reproductions of stains and imperfections seen on the originals. Pope Benedict will be given the first set of the work, published by the Vatican Secret Archives in collaboration with Italy's Scrinium cultural foundation, which acted as curator and will have exclusive world distribution rights.

The Templars, whose full name was "Poor Fellow-Soldiers of Christ and of the Temple of Solomon," were founded in 1119 by knights sworn to protecting Christian pilgrims visiting the Holy Land after the Crusaders captured Jerusalem in 1099. They amassed enormous wealth and helped finance wars of some European monarchs. Legends of their hidden treasures, secret rituals and power have figured over the years in films and bestsellers such as "The Da Vinci Code." The Knights have also been portrayed as guardians of the legendary Holy Grail, the cup used by Christ at the Last Supper before his crucifixion. The Vatican expects most copies of the work to be bought up by specialized libraries at top universities and by leading medieval scholars.

The Templars went into decline after Muslims re-conquered the Holy Land at the end of the 13th century and were accused of heresy by Philip IV of France - Philip The Fair, their foremost persecutor. Their alleged offences included denying Christ and secretly worshipping idols. The most titillating part of the documents is the so-called Chinon Parchment, which contains phrases in which Pope Clement V absolves the Templars of charges of heresy, which had been the backbone of King Philip's attempts to eliminate them. Templars were burned at the stake for heresy by King Philip's agents after they made confessions that most historians believe were given under duress.

The parchment, also known as the Chinon Chart or Parchment, was "misplaced" in the Vatican archives until 2001, when Frale stumbled across it. "The parchment was catalogued incorrectly at some point in history. At first I couldn't believe my eyes. I was incredulous," she said. "This was the document that a lot of historians were looking for," the 37-year-old scholar said. Philip was heavily indebted to the Templars, who had helped him finance his wars, and getting rid of them was a convenient way of cancelling his debts, some historians say. Frale said Pope Clement was convinced that while the Templars had committed some grave sins, they were not heretics.

Their initiation ceremony is believed to have included spitting on the cross, but Frale said they justified this as a ritual of obedience in preparation for possible capture by Muslims. They were also said to have practiced sodomy. "Simply put, the pope recognized that they were not heretics but guilty of many other minor crimes -- such as abuses, violence and sinful acts within the order. But that is not the same as heresy," Frale said.

Despite his conviction that the Templars were not guilty of heresy, in 1312 Pope Clement ordered the Templars disbanded for what Frale called "the good of the Church" following his repeated clashes with the French king. Frale depicted the trials against the Templars between 1307 and 1312 as a battle of political wills between Clement and Philip, and said the document means Clement's position has to be reappraised by historians. "This will allow anyone to see what is actually in documents like these and deflate legends that are in vogue these days," she said. 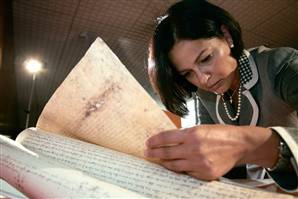 Rosi Fontana, who has helped the Vatican coordinate the project, said, "The most incredible thing is that 700 years have passed and people are still fascinated by all of this. The precise reproduction of the parchments will allow scholars to study them, touch them, admire them as if they were dealing with the real thing. But even better, it means the originals will not deteriorate as fast as they would if they were constantly being viewed."

The minutes of trials against the Templars,
"Processus Contra Templarios -- Papal Inquiry into the Trial of the Templars" 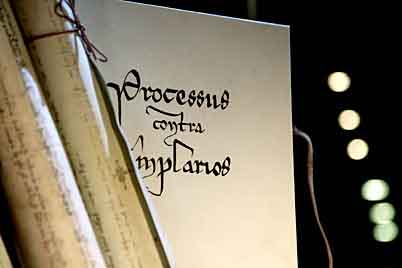 The Vatican Secret Archives is publishing 799 copies of a document
that was found in 2001 after being lost for centuries. 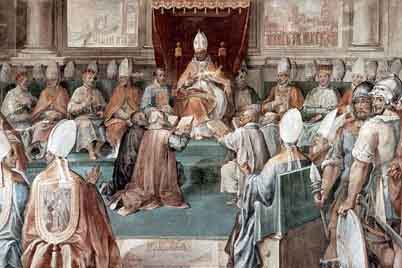 The document suggests that Pope Clement V, depicted above in a painting,
did not think the Knights were guilty of heresy, but felt pressure from
the French King and ordered the group to disband.


The photos on AOL end with connections to the bloodline ... (wink) 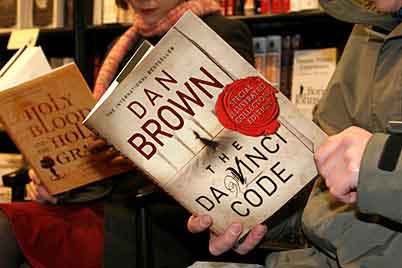 It's interesting that one researcher is named 'Rosi' as in Rose Bloodline. 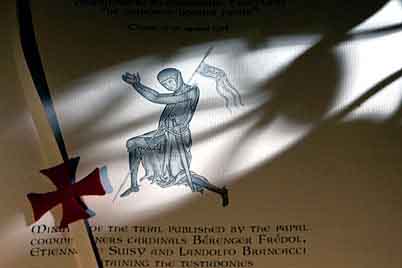 
On October 28, 2007 the History Channel presented a new two-hour special "The Lost Book of Nostradamus" in which I was one of the guest speakers, deciphering the codes in this lost manuscript, whose secrets are meant to be revealed at this time.

In 1994, Italian journalist Enza Massa was at the Italian National Library in Rome when she stumbled upon an unusual find. It was a manuscript dating to 1629, titled: Nostradamus Vatinicia Code. Michel de Notredame, the author's name, was on the inside in indelible ink. The book contains cryptic and bizarre images along with over eighty watercolor paintings by the master visionary himself. Follow the investigative trail of how the manuscript was found in the archives and exactly how it got there. New insight is given into the life of Nostradamus and his relationship with Pope Urban VIII, who knew about this manuscript and in whose possession it was for many years.

Secret societies, conspiracy theories, the quest for god, all of which enveloped our reality through 'time' are now to be revealed, their greater meaning understood as the program evolves based on its own blueprint (design). This is the pivotal point in humanity's history, and if all else makes no sense to you, being part of this transition should be understood as the reason your soul came here. Your awareness in this transition goes to many factors, discussed in other archived blogs. It's all about myth, math and metaphor.

We experience change everyday in the behavior and consciousness of humanity, the decline of outdated paradigms: the church and its power to play god and dictate doctrine, global climate changes, technologies that allow us to access information and create our own patterns and predictions, and more. Nothing remains the same. Everything is evolving in the alchemy and consciousness of time.

Nostradamus was an alchemist, not in the sense of turning lead into gold, but in returning consciousness to what some call a "Golden Age" where we move from the energies of the physically driven lower frequencies (male) to the return of consciousness to higher frequencies of though (female). This view is clearly depicted in the final images of "The Lost Book of Nostradamus."

There has been an exclusive investigation into how the manuscript, believed to have been written by Nostradamus, ended up in Italy's National Library in Rome. The book, stumbled upon by an Italian journalist, contains a series of never before deciphered prophecies.

Nostradamus scrambled both the meaning and the order of his quatrains and the images in the manuscript, so that humanity was ready to decode them. That time is now.

Whether or not you believe Nostradamus created the images in the manuscript, had someone draw them for him, overall they are a catharsis of the history of the human experiment, closing with its final rebirth.

There are those who link the images with the quatrains. I found several parallels, but nothing definitive.

Reality, the human experiment in linear time and emotion, is created by design. Nostradamus' 1,000 Quatrains are loosely documented patterns that fit the time frame one is experiencing, as if a virtual reality experience. Patterns or archetypes that help explain reality and through which our minds process what it is experiencing in the grids of creation. The patterns are timeless, seamless, and repeat in cycles. These patterns are bisynchronous - they remain stationary as your consciousness flowing through them, streaming consciousness, allowing one to experience many realities at the same time. 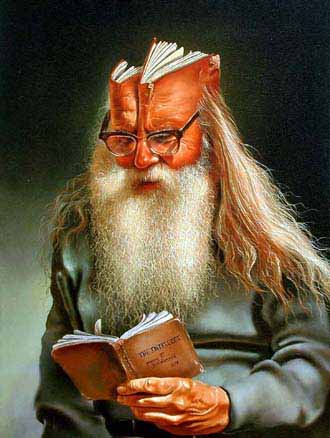 "The Lost Book of Nostradamus"