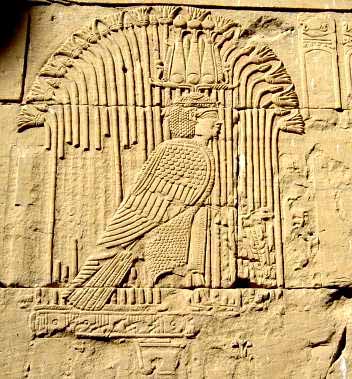 Manulis was a sun god of Lower (northern) Nubia. He is usually depicted wearing a crown of ram horns surmounted by high plumes, sun disks and cobras. His name in Egyptian inscriptions is "Merwel" but the Greek version, as found in the text known as the "Vision of Mandulis" is used almost universally.

Mandulis was often depicted wearing an elaborate headdress of ram's horns, cobras and plumes surmounted by sun discs. He was sometimes shown in the form of a hawk, but wearing a human head. 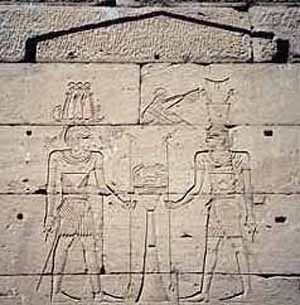 A chapel to Mandulis existed on the island of Philae off the eastern colonnade approaching the temple of Isis, a goddess who seems to be regarded at least as his close companion. But it is in the temple of Kalabsha (now moved to a location just above the High Dam at Aswan), the most impressive monument in Lower Nubia from the Graeco-Roman period, that the best evidence of the cult of Mandulis can be found.

Constructed on the site of an earlier New Kingdom sanctuary, Kalabsha (ancient Talmis) took its present form during the reign of the Roman emperor Augustus. Mandulis, as represented on its walls, does not seem at all out of place among the other members of the Egyptain pantheon placed in his company. From the "Vision of Mandulis" we find the unforced equation of this Nubian solar deity to Egyptian Horus and to the Greek Apollo.