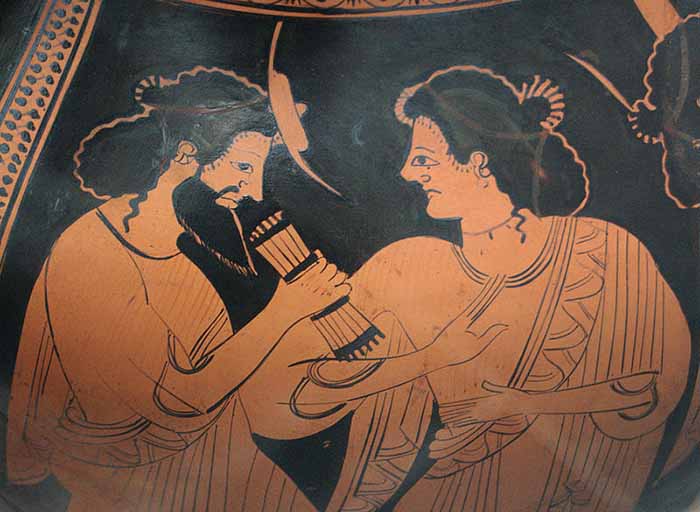 
In Greek mythology, Maia is one of the Pleiades and the mother of Hermes. The goddess known as Maia among the Romans may have originated independently, but attracted the myths of Greek Maia because the two figures shared the same name.

In ancient Roman religion and myth, Maia embodied the concept of growth, as her name was thought to be related to the comparative adjective maius, maior, "larger, greater." Originally, she may have been a homonym independent of the Greek Maia, whose myths she absorbed through the Hellenization of Latin literature and culture.

In an archaic Roman prayer, Maia appears as an attribute of Vulcan, in an invocational list of male deities paired with female abstractions representing some aspect of their functionality. She was explicitly identified with Earth (Terra, the Roman counterpart of Gaia) and the Good Goddess (Bona Dea) in at least one tradition.

Her identity became theologically intertwined also with the goddesses Fauna, Magna Mater ("Great Goddess", referring to the Roman form of Cybele but also a cult title for Maia), Ops, Juno, and Carna, as discussed at some length by the late antiquarian writer Macrobius. This treatment was probably influenced by the 1st-century BC scholar Varro, who tended to resolve a great number of goddesses into one original "Terra." The association with Juno, whose Etruscan counterpart was Uni, is suggested again by the inscription Uni Mae on the Piacenza Liver.

The month of May (Latin Maius) was supposedly named for Maia, though ancient etymologists also connected it to the maiores, "ancestors," again from the adjective maius, maior, meaning those who are "greater" in terms of generational precedence. On the first day of May, the Lares Praestites were honored as protectors of the city, and the flamen of Vulcan sacrificed a pregnant sow to Maia, a customary offering to an earth goddess that reiterates the link between Vulcan and Maia in the archaic prayer formula.

In Roman myth, Mercury (Hermes), the son of Maia, was the father of the twin Lares, a genealogy that sheds light on the collocation of ceremonies on the May Kalends.

The month of May was named for Maia. On May 15, the Ides, Mercury was honored as a patron of merchants and increaser of profit (through an etymological connection with merx, merces, "goods, merchandise"), another possible connection with Maia his mother as a goddess who promoted growth.

She was associated with Vulcan, and on the first of May the flamen of that god sacrificed to her a pregnant sow, an appropriate sacrifice also for an earth goddess such as Bona Dea: a sow-shaped wafer might be substituted.

The goddess was accessible only to women - men were excluded from her precincts.