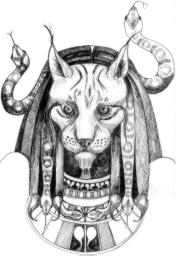 In early Egyptian mythology, Mafdet (also spelled Maftet) is depicted as a woman with the head of a cheetah. Her name means (she who) runs swiftly. She is present in the Egyptian pantheon as early as the First Dynasty.

Mafdet was the deification of legal justice, or rather, of execution. Thus she was also associated with the protection of the king's chambers and other sacred places, and with protection against venomous animals, which were seen as transgressors against Ma'at.

Since venomous animals such as scorpions and snakes are killed by felines, Mafdet was seen as a feline goddess, although it is uncertain whether alternately, she also was meant to be a cat, a mongoose, or a leopard. In reflection of the manner in which these animals kill snakes and she was given titles such as, slayer of serpents.

In art, Mafdet was shown as a feline, a woman with a feline head, or a feline with the head of a woman, sometimes with braided hair which ended in the tails of scorpions. At times she was shown with a headdress of snakes.

She also was depicted as a feline running up the side of an executioner's staff. It was said that Mafdet ripped out the hearts of wrong-doers, delivering them to the pharaoh's feet, in a similar manner as domestic cats who present people with rodents or birds that they have killed or maimed.

During the New Kingdom, Mafdet was seen as ruling over the judgment hall in Duat where the enemies of the pharaoh were decapitated with Mafdet's claw.

Her cult was eventually replaced by that of Bast, another cat-goddess, a lioness warrior who was seen as the pharaoh's protector, but her cheetah imagery continued in association with the pharaohs including personal items and the bed upon which their mummies were placed.

Mafdet as the bed upon which a mummy of 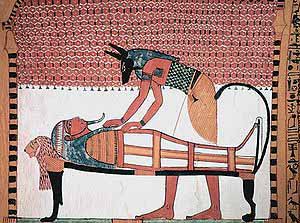 a pharaoh is being attended to by Anubis