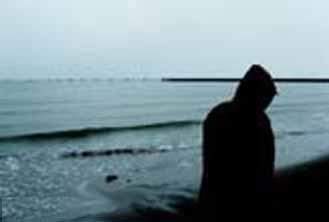 It's true, you might die of loneliness, but not until you're older. In a new University of Chicago study of men and women 50 to 68 years old, those who scored highest on measures of loneliness also had higher blood pressure. And high blood pressure is a major risk factor for heart disease, the number one killer in many industrialized nations and number two the United States.

Richard Suzman of the National Institute on Aging, which funded this research, said he was "surprised by the magnitude of the relationship between loneliness and hypertension in this well-controlled, cross-sectional study."

Also, loneliness does eat at you. The morbid health effect of loneliness accumulates gradually and faster as you get older, the study found. Loneliness was worse for blood pressure than any other psychological or social factor the researchers studied.

Weight loss and physical exercise reduce blood pressure by the same amount that loneliness increases it. Hawkley said this finding especially surprised her.

"It's comparable to the effects you see for the health benefits that are so often advocated such as exercise [to] keep your blood pressure under control," Hawkley told Live Science.

About one in five Americans is lonely, a gnawing emotional state that is a patchwork of feeling unhappy, stressed out, friendless and hostile.

The main psychological difference between lonely and non-lonely people is that the former perceive stressful circumstances as threatening rather than challenging and cope passively and withdraw from stress rather than trying to solve the problem, said study co-author John T. Cacioppo.

Lonely people who are middle-aged and older tend to also have problems with alcoholism, depression, weak immune system responses to illness, impaired sleep and suicide.

Some psychologists think that associations between loneliness and health or physiology are just part of a generic stress response, but this new research suggests loneliness has a unique impact. More to come social trends in the United States suggest a recipe for greater loneliness and thus higher blood pressure and risk of heart disease. The population is aging and more people move around and live alone than ever, contributing to greater separation from caring friends and family.

Data for the study, announced this week and published in the journal Psychology and Aging, were collected in 2001. Future research could demonstrate if loneliness causes higher blood pressure, or is simply associated with it.

Meanwhile, it's probably a good idea to nurture those special friendships, marry, or at least get a decent roommate if you want to keep your blood pressure down and beat down your odds of getting heart disease.

We live in a reality where most relationships have a timeline. By the nature of our creation we all must change as do our relationships, at which time we move on, alone, or with another. If you are used to being with a partner, you can become very lonely if you are the one who now must live alone. It can send you back to ... parental caretaking, an ex-partner, or other wrong choices as you chose to fill a void.

On the other hand, many of us are relieved to live on our own after a lifetime of living with others and compromising our needs and privacy. Humanity is in a 'space' of discovery on many levels, especially in this timeline of personal awareness and healing.

Are you lonely, yet live with others? The need to feel connected is important in the human condition which explains why many people have pets.

Loneliness causes depression. Without a reason to go on, one creates illnesses and accidents, then crosses over.

Souls, of all ages, are tired, but especially in the age group mentioned above, in situations where they have spent much of their lives either abused, searching and never finding the 'missing link' in their lives, in poor health, working very hard and now burned out, and more.