Linear B is the name given to a writing system discovered by the archaeologist Sir Arthur Evans (1851-1941) at Knossos on Crete in 1900. Evans believed he had discovered the palace of King Minos, together with the Minotaur's labyrinth. He was also convinced that the language represented by Linear B was not Greek but an unrelated language which he called 'Minoan'.

In 1939, a large number of clay tablets inscribed with Linear B writing were found at Pylos on the Greek mainland, much to the surprise of Evans, who thought Linear B was used only on Crete.

Evans spent the rest of his life trying to decipher Linear B, with only limited success. He realised that three different writing systems were used in ancient Crete: a 'hieroglyphic' script, Linear A, and Linear B. The hieroglphic script appears only on seal stones and has yet to be deciphered. Linear A, also undeciphered, is thought to have evolved from the hieroglyphic script and was used until the 15th Century BC. After the Greeks conquered Knossos, Linear B developed, probably from Linear A, although the relationship between the two scripts is unclear.

Evans figured out that short lines in Linear B texts were word dividers. He also deciphered the counting system and a number of pictograms, which led him to believe that the script was mainly pictographic. Evans also discovered a number of parallels between the Cypriot script, which had been deciphered, and Linear B. This indicated that the language represented by Linear B was an ancient form of Greek, but he wasn't prepared to accept this, being convinced that Linear B was used to write Minoan, a language unrelated to Greek.

Micheal Ventris (1922-56) was the person who eventually deciphered Linear B in 1953. His interest was sparked in 1936 on a school trip to an exhibition about the Minoan world organised by Arthur Evans. For the next 17 years, Ventris struggled to understand Linear B. At first, he was sceptical that the language of Linear B was Greek, even though many of the deciphered words resembled a form of Ancient Greek. Later, with the help of John Chadwick, an expert on early Greek, he showed beyond reasonable doubt the Linear B did indeed represent Greek. 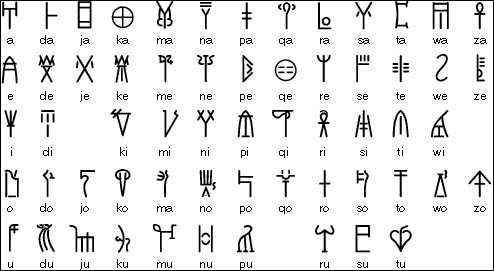 These logograms stand for whole words and mainly represent items that were traded. As Linear B was used mainly for recording transactions, this is not surprising. Some of the logograms resemble the things they represent, so could be called pictograms. Not all the logograms have been deciphered. Linear B Wikipedia