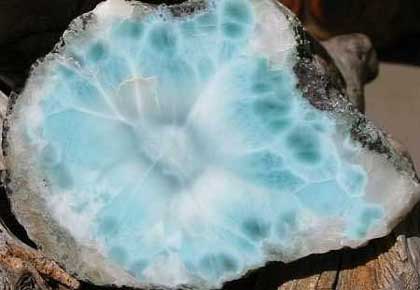 Larimar also called "Stefilia's Stone", is a rare blue variety of pectolite found only in the Dominican Republic, in the Caribbean. Its coloration varies from white, light-blue, green-blue to deep blue. The Dominican Republic's Ministry of Mining records that on November 23, 1916 Father Miguel Domingo Fuertes Loren of the Barahona Parish requested permission to explore and exploit the mine of a certain blue rock he had discovered. Pectolites were not yet known in the Dominican Republic and the request was rejected.

In 1974, at the foot of the Bahoruco Range, the coastal province of Barahona, Miguel Mendez and Peace Corps volunteer Norman Rilling rediscover Larimar on a beach. Natives, who believed the stone came from the sea, called the gem Blue Stone. Miguel took his young daughter's name Larissa and the Spanish word for sea (mar) and formed Larimar, by the colors of the water of the Caribbean Sea, where it was found. The few stones they found were alluvial sediment, washed into the sea by the Bahoruco River. An upstream search revealed the in situ outcrops in the range and soon the Los Chupaderos mine was formed.

Larimar stones make beautiful jewelry that can be found online. As with other crystals and stones, it is used for healing and energy - lined to throat chakra and the thyroid gland.


The article below speaks of Atlantis, Edgar Cayce and a blue stone. I don't believe he was referring to the Larimar Stones, but to a metaphoric blue stone linked to the alchemy of consciousness - along the lines of the Philosopher's Stone.


The Larimar Stones of Atlantis 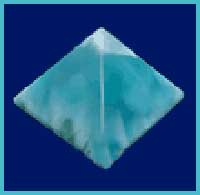 Larimar is also called the Atlantis Stone, because a Spiritual Master who once lived in Trinidad & Tobago and who founded many Yoga Centres in the Caribbean, United States, Australia, and South America claimed some islands in the Caribbean, particularly the Dominican Republic, were in fact part of the sunken continent Atlantis.

Edgar Cayce, "The Sleeping Prophet" (1877-1945), indicated that part of Atlantis could be found in the Caribbean. He also indicated that one would find a blue stone with extraordinary healing attributes, a description that corresponds to Larimar.

Other sources in Europe have ratified the widespread belief that the island where Haiti and the Dominican Republic are situated, was indeed part of the Atlantis continent. In Europe in the 1980s, Larimar was commonly known as the Atlantis Stone and even today, customers at mineral and gem shows as well as Metaphysical shows and events, often refer to and seek the Atlantis Stone, rather than Larimar.

It is well known that the Larimar gemstone, the blue beauty of the Caribbean, exists only in one region in the world, close to Baoruco, province of Barahona, Dominican Republic, not far from the border to Haiti, and hence the popularisation of the name Atlantis Stone.

Many believe that the colors of Larimar also represent a trace to Atlantis and there are books about Atlantis that mention Larimar as an important tool for healing work.

Mother Earth gave this special gemstone to human beings in the seventies, and the appearance of Larimar coincides with the emergence of information about Atlantis.

Sensitive persons can feel and see the information about Atlantis carried by Larimar. Today, there are thousands of people - naturalists and those who practice alternative and holistic healing methods using Larimar to assist and reinforce the healing process. 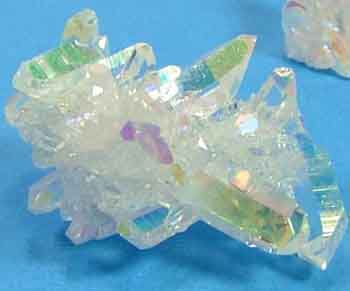