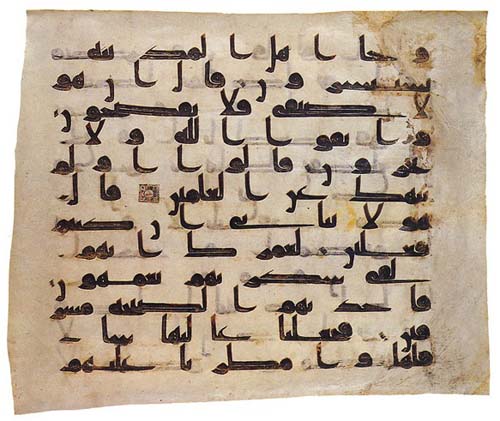 In calligraphy, earliest extant Islamic style of handwritten alphabet that was used by early Muslims to record the Qur'an. This angular, slow-moving, dignified script was also used on tombstones and coins as well as for inscriptions on buildings. Some experts distinguish Kufi proper from Meccan and Medinese scripts, which were also used to copy the Qur'an.

The script was called Kufi because it was thought to have been developed at Kufah in Iraq--an early Islamic centre of culture. Simple Kufi was developed early in the Islamic era; the earliest surviving copies of the Qur'an--from the 8th to the 10th century--were copied in it. Later a floral Kufi flourished, and several other varieties of the script developed, including foliated Kufi, plaited or interlaced Kufi, bordered Kufi, and squared Kufi. It went out of general use about the 12th century, although it continued to be used as a decorative element to contrast with the scripts that superseded it. Kufic Script