Kokopelli is a fertility deity, usually depicted as a humpbacked flute player (often with a huge phallus and antenna-like protrusions on his head), who is worshipped by many Native American tribes in the Southwestern United States.

Like most fertility deities, Kokopelli presides over both childbirth and agriculture. He is also a trickster god.

Because of his influence over human sexuality, Kokopelli is often depicted with an inhumanly large phallus. Among the Ho-Chunk, this penis is detachable, and he sometimes leaves it in a river in order to have sex with girls who bathe there.

Among the Hopi, Kokopelli carries unborn children on his back and distributes them to women (for this reason, young girls are often deathly afraid of him). He often takes part in rituals relating to marriage, and Kokopelli himself is sometimes depicted with a consort, a woman called Kokopelli-mana by the Hohokam and Hopi.

Kokopelli also presides over the reproduction of game animals, and for this reason, he is often depicted with animal companions such as rams and deer. Other common creatures associated with him include sun-bathing animals such as snakes, or water-loving animals like lizards and insects. Because of this, some scholars believe that Kokopelli's flute is actually a blowgun (or started out as one), but this is a minority opinion.

In his domain over agriculture, Kokopelli's flute playing chases away the Winter and brings about Spring. Many tribes, such as the Zuni, also associate Kokopelli with the rains. He frequently appears with Paiyatamu, another flautist, in depictions of maize-grinding ceremonies. Some tribes say he carries seeds and babies on his back.

Kokopelli has been revered since at least the time of the Hohokam, Yuman, and Ancestral Pueblo peoples. The first known images of him appear on Hohokam pottery dated to sometime between 750 and 850 AD.

Kokopelli may have originally been a representation of Aztec traders, known as pochtecas, who may have traveled to this region from northern Mesoamerica. These traders brought their goods in sacks slung across their backs and this sack may have evolved into Kokopelli's familiar hump; some tribes consider Kokopelli to have been a trader. These men may also have used flutes to announce themselves as friendly as they approached a settlement. This origin is still in doubt, however, since the first known images of Kokopelli predate the major era of Mesoamerican-Ancestral Pueblo peoples trade by several hundred years, as well as the Aztec Empire and its pochtecas. There is another story from the Hopi Culture that talks about Kokopele being a hunchbacked member of the village who tricks the village beauty into having sex with him.

Many believe that Kokopelli was more than a trader, and more significantly, an important conveyor of information and trinkets from afar. As a storyteller par excellence Kokopelli had the gift of languages with a formidable repertoire of body-language storytelling skills to complement his many talents. Kokopelli's usual noisy announcement upon arrival secured both the identity, and therefore the safety, of his unique presence into a community.

Often accompanied by an apprentice in his travels and trade, Kokopelli was important in linking distant and diverse communities together. In the South American Andes, the 'Ekeko' character functioned in much the same way. Upon arrival, his banging and clanging of his wares dangling all about his person signaled to all that a night of entertainment and trade of his goods and talismans was at hand.

Even today, occasional outside visitors may be called or referred to as 'Kokopelli' when they bring news, stories, and trinkets from the outside world to share with the little pueblos or villages.

Another theory is that Kokopelli is actually an anthropomorphic insect. Many of the earliest depictions of Kokopelli make him very insect-like in appearance. The name "Kokopelli" may be a combination of "Koko", another Hopi and Zuni deity, and "pelli", the Hopi and Zuni word for the desert robber fly, an insect with a prominent proboscis and a rounded back, which is also noted for its zealous sexual proclivities. A more recent etymology is that Kokopelli means literally "kachina hump". Because the Hopi were the tribe from whom the Spanish explorers first learned of the god, their name is the one most commonly used.

Kokopelli is one of the most easily recognized figures found in the petroglyphs and pictographs of the Southwest. The earliest known petroglyph of the figure dates to about 1000 AD.[4] The Spanish missionaries in the area convinced the Hopi craftsmen to usually omit the phallus from their representations of the figure. As with most kachinas, the Hopi Kokopelli was often represented by a human dancer. Kokopelli is a cottonwood sculpture often carved today.

A similar humpbacked figure is found in artifacts of the Mississippian culture of the United States southeast. Between approximately 1200 to 1400 AD, water vessels were crafted in the shape of a humpbacked woman. These forms may represent a cultural heroine or founding ancestor, and may also reflect concepts related to the life-giving blessings of water and fertility.

Among the Hopi, Kokopelli carries unborn children on his back and distributes them to women; for this reason, young girls often fear him. He often takes part in rituals relating to marriage, and Kokopelli himself is sometimes depicted with a consort, a woman called Kokopelmimi by the Hopi. It is said that Kokopelli can be seen on the full and waning moon, much like the "rabbit on the moon".

Kokopelli also presides over the reproduction of game animals, and for this reason, he is often depicted with animal companions such as rams and deer. Other common creatures associated with him include sun-bathing animals such as snakes, or water-loving animals like lizards and insects.

In his domain over agriculture, Kokopelli's flute-playing chases away the winter and brings about spring. Many tribes, such as the Zuni, also associate Kokopelli with the rains. He frequently appears with Paiyatamu, another flutist, in depictions of maize-grinding ceremonies. Some tribes say he carries seeds and babies on his back.

In recent years, the emasculated (i.e. non-ithyphallic) version of Kokopelli has been adopted as a broader symbol of the Southwestern United States as a whole. His image adorns countless items such as T-shirts, ball caps, key-chains, and patio decor. A bicycle trail between Grand Junction, Colorado, and Moab, Utah, is now known as the Kokopelli Trail.

The construction of the Santa Fe Railroad in the 1880s brought about the rise of Southwestern Indigenous arts and crafts as commodities. This commodification was the result of the growing tourist industry in the Southwest and the appeal of directly purchasing artwork from Indigenous makers. Kokopelli represents these commercial facets of the Southwest, and his humpbacked, flute-playing figure can be found on a variety of merchandise and marketing products.

Scholars argue that on a sociological level, Kokopelli represents the tension between the civilized masculinity of Anglo-America and the primitive masculinity of the Ňother." In the process of Ňothering,Ó the primitive masculinity of Kokopelli is projected onto Indigenous males as a single entity and highlights sexual virility and immorality. The contemporary iconography of Kokopelli is that of a castrated flute-player, and with dismissal of pre-existing cultural connotations, his commercial abstraction represents the function of neo-colonialism in modern, Anglo-American society.


Kokopelli and Kokopelli Mana as depicted by the Hopi 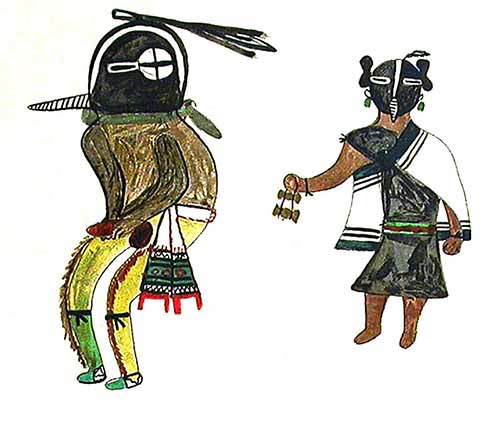 Petroglyph of Kokopelli in the "Rio Grande Style" of the ancestral Pueblo culture
after the year 1300 AD; taken at Mortendad Cave near Los Alamos, NM 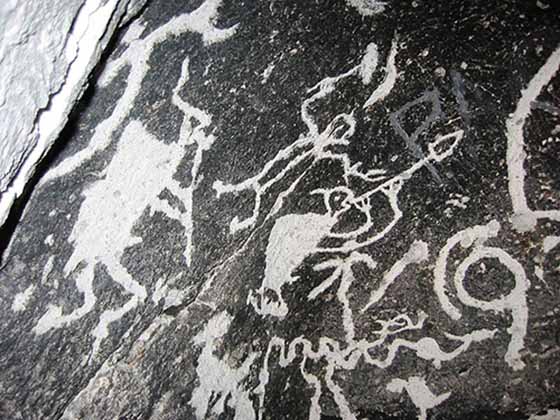 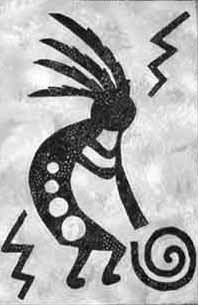 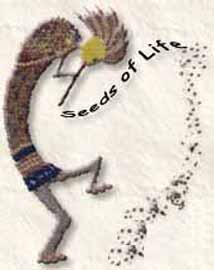