Sun-god creator in the form of a scarab beetle.

The word kheper (or hprr) means scarab, and as the animal was associated with life and rebirth. Literally the word means "he who is coming into being". Like Atum, Khephir was a self-created god. The scarab lays its eggs in a ball of dung and rolls it to hide in a safe place. From this unlikely substance the Egyptians observed new life emerging, seemingly from the Earth. Hence he was a god of creation.

Early in Egyptian history the beetle also came to represent the soul rising from death - resurrected, transcendent, fully formed and ready to make its journey and face its judgment in order to live in the Afterlife. By the New Kingdom (1539-1070 BC), the funerary texts from the papyri portray a scaraboid form as the most powerful symbol of life's victory over death.

Similarly, they believed that Khephri, in the form of a gigantic scarab, rolled the sun like a huge ball through the sky, then rolled it through the underworld to the eastern horizon. Each morning Khephri would renew the sun so that it could give life to all the world. As a deity closely associated with resurrection, Khephir was believed to be swallowed by his mother, Nut each evening and passed through her body to be reborn each morning. Therefore he is also closely associated with Ra and Atum. Later funerary texts combine Khephra (scarab) with Atum (ram) into a ram-headed beetle, a portrayal of the supreme god overseeing the cycle of life and death (and Afterlife).

Egyptologists believe that there was probably a colossal stone scarab on a plinth at most if not all Egyptian temples. In this configuration Phephir represented the temple as the Primeval Mound from which the sun-god emerged to begin the process of cosmogony. The word Khepri was also often used in the titulary of the king.

One of the many images of the sun god Ra was the scarab beetle. The Egyptians saw in its tireless mocing of a ball of dung a parallel to the movement of the sun across the sky. They also noticed that small beetles emerged from similar balls and assumed that, like the sun the scarab was a self-created entity. Heliopolis was the cult centre of Khepra worship; the name Khepra means 'scarab' or 'he who becomes', with the added idea of continuinnng and eternal life. The god was shown as a scarab bettle, or as a man with a complete beetle instead of his human head.

Inscriptional evidence for Khepri occurs in the pyramids of the Old Kingdom: a wish is expressed for the sun to come into being in its name of Khepri. The priesthood of the sun-god combined his different forms to assert that Atum-Khepri arises on the primeval mound in the mansion of the Benu in Heliopolis. Referring to the myth of the sun-god's journey through the hours of night. Khepri is said to raise his beauty into the body of Nut the sky-goddess. From noticing the somewhat slimy sonsistency of the scarab beetle's dirt-ball, the earth is made from the spittle coming from Khepri.

From about the Middle Kingdom representations of Khepri as the ovoid scarab regularly occur in three-dimensional form carved as the amuletic backing of seals. These scarabs, by implication, connect the wearer with the sun-god. The underside could be incised, not just with the titles and name of an official, but also with good luck designs, deities and the names of royalty used for their protective power. Kings would use the undersides of large scarabs to commemorate specific events- Amenhotep III has left a number of these news bulletins which inter alia give information on his prowess at lion hunting and celebrate the arrival of a Syrian princess into his harem.

The scarab could form the bezel of a ring or be part of a necklace or bracelet- the tomb of Tutankhamun has provided us with splendid examples of scarabs made of semi-precious stones like lapis lazuli set in gold. One of the young king's pectorals in particular stresses the dominance of Khepri the sun-god as well as being a masterpiece of the jeweler's craft: in the centre of the design is a scarab carved from chalcedony combined with the wings and talons of the solar hawk, representing Khepri whom as controller of celestial motion, is shown here pushing the boat of the moon-eye.

As an amulet, the scarab representation of Khephir was by far the most important.Ę It might be viewed as being similar to a cross for a Christian.Ę There were ornamental scarabs, heart scarabs, winged scarabs, marriage scarabs, lion hunt scarabs and many other such amulets. 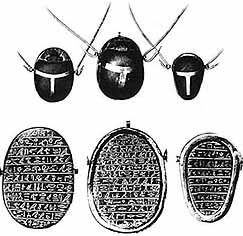 Paintings in funerary papyri show Khepri on a boat being lifted up by the god Nun, the primeval watery chaos. In some depictions Khepri coalesces with other conceptions of the sun-god to present the appearance of a ram-headed beetle. On a wall of the interior chamber in the tomb of Petosiris (fourth century BC) at Tuna el-Gebel, Khepri was carved quite naturalistically in low relief, painted lapis lazuli blue, wearing the 'atef' crown of Osiris.

Less frequently Khepri could be shown as an anthropomorphic god to the shoulders with a full scarab beetle for a head. Bizarre as it might seem, the Egyptian artist has left some magnificent depictions of Khepri in this form- e.g. in the tomb of Nefertari in the Valley of the Queens. Although relatively few examples are extant in museums or in Situ, it seems likely that the major temples each possessed a colossal hard-stone statue of Khepri. Raised on a plinth, the scarab symbolized architecturally the concept that the temple was the site where the sun-god first emerged to begin the creation of the cosmos.