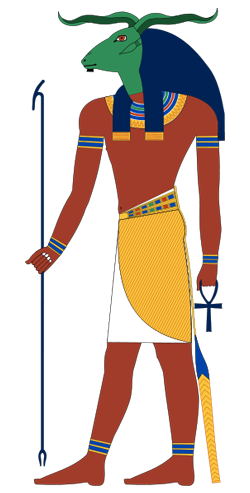 Potter God of the Inundation Silt and Creation

God of fecundity and creation from the Cataract area. 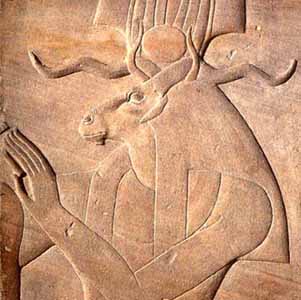 Khnum (Khenmew, Khnemu, Khenmu, Chnum), from the Egyptian 'unite', 'join' or 'build', was an ancient deity of fertility, water and the great potter who created children and their ka at their conception. He was mentioned in the pyramid texts and the pyramid builder Khufu's name was actually 'Khnum-Khufu' meaning 'Khnum is his Protector'. His cult was popular before the cult of Ra eclipsed it. The next pyramid builders were his son and grandson who added 'Ra' to their names - Khafra and Menkaura. Khnum was possibly even a predynastic god. The Egyptians believed that he was the guardian of the source of the Nile who was originally a Nile god, but who became a helper of Hapi.

His role changed from river god to the one who made sure that the right amount of silt was released into the water during the inundation. In working with the silt, the very soil that the ancient Egyptian potters used, he became the great potter who not only molded men and women, but who molded the gods themselves and the world.

He was depicted as a ram, ram-headed man or as a full male with the horns of a ram who wears a plumed white crown of Upper Egypt. In early times he was shown as the first domesticated ram, the Ovis longipes palaeoaegyptiacus, with long corkscrew horns growing horizontally outwards from his head. This species died out, though even so he was still depicted as that breed of sheep until much later in Egyptian history. Eventually he was shown as the Ovis platyra (the type of ram associated with Amen) with horns curving inward towards his face. Sometimes he was shown with four ram heads, aligning him with the sun god Ra, the air god Shu, the earth god Geb and Osiris, lord of the dead. In his four headed form, he was known as Sheft-hat. The Egyptians believed that the ram was a very potent animal, and thus Khnum was linked to fertility. 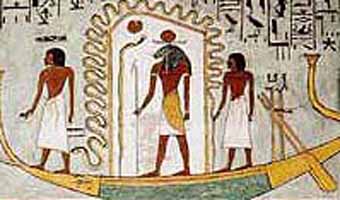 Considered to be the ba of Ra - this might be an Egyptian pun on the fact that the ram was also called ba - he helped Ra travel through the underworld each night on the Solar Barque. In the pyramid texts (Utterance 300), the barque was referred to as the "Ikhet Barque which Khnum made", so not only did he defend the barque, but Khnum was thought to have created it as well. In this form he was often called Khnum-Ra and wears the sun disk of Ra.

Originally a water god, Khnum was often pictured by the Egyptians as the source of the Nile. On temple walls, he was sometimes shown as holding a jar, with the precious water flowing out of it. He was also believed to be a guardian of the waters in the underworld. He is mentioned as a protective deity of the dead. Many heart scarabs have a similar versions of one of the spells from The Book of the Dead to protect the deceased against a negative judgement in the Halls of Ma'at.


The ram-headed god was 'Lord of the Cataract' a god of the yearly inundation and the fertile black soil that came with the flood. Khnum was also seen as a fertility god because of his association with the fertile silt. Pottery was created out of the soil of the Nile, and it was believed that he created the first humans - and the gods - on his potter's wheel with this silt. In Iunyt (Esna) it was believed that it was he who molded the First Egg from which the sun hatched, and thus was a creator god who was 'Father of the Fathers of the Gods and Goddesses, Lord of Created Things from Himself, Maker of Heaven and Earth and the Duat and Water and the Mountains'.

The vast majority of the pottery was manufactured from either Nile silts or marl clays, the two primary raw materials used in Egyptian pottery making ... Marl clays and Nile silts were usually not used for the same pot types. For example, cooking pots, cups, platter bowls, ring stands, Tell el-Yehudiyah ware juglets, black and red polished juglets, beakers, and certain groups of jars were produced mostly from Nile silts ... platter bowls formed of marl clay were usually slipped red to provide the desired exterior look of a Nile silt; a carinated bowl manufactured from silt might be slipped white to resemble a marl clay.

- Ethnicity, Pottery, and the Hyksos at Tell El-Maskhuta in the Egyptian Delta, Carol A. Redmount 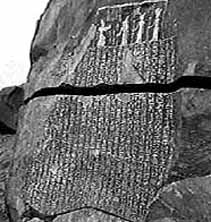 The Famine Stele at Sehel island tells of a dream that Djoser supposedly had. Egypt had been going through a seven year drought and a temple had been built to Khnum in the hopes that the famine would end:

When I was asleep, my heart was in life and happiness. I found the god standing. I caused him pleasure by worshiping and adoring him. He made himself known to me and said: "I am Khnum, your creator, my arms are around you, to steady your body, to safeguard your limbs. I bestow on you ores with precious stones existing since antiquity that were not worked before to build temples, rebuild ruins, sculpt chapels for his master. I am master of creation. I have created myself, the great ocean which came into being in past times, according to whose pleasure the Nile rises. For I am the master who makes, I am he who makes himself exalted in Nun, who first came forth, Hapi who hurries at will; fashioner of everybody, guide of each man to their hour.

I am Tatenen, father of Gods, the great Shu living on the shore. The two caves are in a trench below me. It is up to me to let loose the well. I know the Nile, urge him to the field, I urge him, life appears in every nose. As one urges to the field .......... I will make the Nile swell for you, without there being a year of lack and exhaustion in the whole land, so the plants will flourish, bending under their fruit. Renenutet is in all things everything will be brought forth by the million and everybody ...... in whose granary there had been dearth. The land of Egypt is beginning to stir again, the shores are shining wonderfully, and wealth and well-being dwell with them, as it had been before.

Then I awoke happy, my heart was decided and at ease. I decreed this order to the temple of my father Khnum. Royal sacrifice for Khnum-Re, lord of the cataract, first of Nubia, as reward for what you favour me with. I make you a gift of your western shore by the mountain of the dusk and your eastern shore by the mountain of dawn, from Elephantine to ...... with twelve auroras on the eastern and western shores, with the plants, with the harbours with the river and with every settlement on these auroras.

As potter, he was thought to mould the body of a child, and it's ka before birth. He was called the 'Father of Fathers and the Mother of Mothers'. He was also the one who gave health to the child after it was born. In the story of Raddjedet's triplets, the birth related goddesses Isis, Nephthys, Meskhenet and Heqet disguised themselves as female musicians with Khnum as their porter. After each child was "rushed forth", the umbilical cord had been cut and the destiny had been pronounced, Khnum was the one who "gave health" to each child. So not only did Khnum create the child and its double, but he was thought to also give it health at birth.

Hatshepsut was one pharaoh who encouraged the belief that Khnum, at Amen's request, created her and her ka:

Amen-Ra called for Khnum, the creator, the fashioner of the bodies of men.

"Fashion for me the body of my daughter and the body of her ka," said Amen-Ra, "A great queen shall I make of her, and honour and power shall be worthy of her dignity and glory."

"O Amen-Ra," answered Khnum, "It shall be done as you have said. The beauty of your daughter shall surpass that of the gods and shall be worthy of her dignity and glory."

So Khnum fashioned the body of Amen-Ra's daughter and the body of her ka, the two forms exactly alike and more beautiful than the daughters of men. He fashioned them of clay with the air of his potter's wheel and Heqet, goddess of birth, knelt by his side holding the sign of life towards the clay that the bodies of Hatshepsut and her ka might be filled with the breath of life. 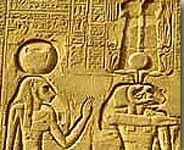 His cult was centered on the island of Abu (Elephantine) at Swentet (Aswan) where he had been worshiped since the Early Dynastic period. In the New Kingdom he was worshiped there as head of a triad with his wife Satet (a fertility goddess of the Nile and purifier of the dead) and daughter Anuket (a huntress goddess of the first cataract near Swentet, 'The Embracer').

There is a Greco-Roman temple for him at Iunyt (Esna) where he was given two consorts, Menhit (a lion headed war goddess, 'She Who Slaughters') and Nebtu (a local goddess of the oasis, 'The Guilded One') - one goddess became a form of the other - and a son called Hike (god of magic, 'He Who Activates the Ka').

He was also linked to the war-like creator goddess Neith at Iunyt (Esna). In Her-wer (Antinoe) he was thought to be the husband of Heqet, the frog goddess who gave the newly created being the breath of life before the child was placed to grow in the mother's womb.

Khnum was a ram god of the Nile, a god of silt, fertility and a potter god of creation. He was a god of the sun, a protector of the dead and protector of Re on the solar barque. This god was an ancient god, popular from early times through to the Greco-Roman period who was thought to have created the pharaoh's form and soul on his potters wheel. From a local god of the Nile to a deity connected with childbirth, Khnum was the 'Father of Fathers and the Mother of Mothers' of the pharaoh.