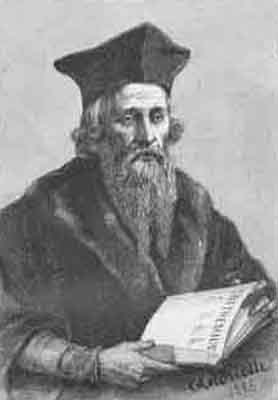 Edward Kelley or Kelly, also known as Edward Talbot (August 1, 1555 - 1597) was a convicted criminal and self-declared spirit medium who worked with John Dee in his magical investigations. Besides the 'ability' to summon spirits or angels on a crystal ball, which John Dee so valued, Kelley also claimed to possess the secret of transmuting base metals into gold.

Legends began to surround Kelley shortly after his death. His flamboyant biography, and his relative notoriety among English-speaking historians (chiefly because of his association with Dee) may have made him the source for the folklorical image of the alchemist-charlatan.

A horoscope drawn up by Dee indicates that Kelley was born in Worcester on August 1, 1555. Kelley's early life is obscure, but most accounts say that he first worked as an apothecary's apprentice. He may have studied at Oxford under the name of Talbot; whether or not he attended university, Kelley was educated and knew Latin and possibly some Greek. According to several accounts, Kelley was pilloried in Lancaster for forgery or counterfeiting.


With Dee in England

Kelley approached John Dee in 1582, initially under the name Edward Talbot. Dee had already been trying to contact angels with the help of a "scryer" or crystal-gazer, but he had not been successful. Kelley professed the ability to do so, and impressed Dee with his first trial. Kelley became Dee's regular scryer. Dee and Kelley devoted huge amounts of time and energy in these "spiritual conferences." From 1582 to 1589, Kelley's life was closely tied to Dee's.

About a year after entering into Dee's service, Kelley appeared with an alchemical book (The Book of Dunstan) and a quantity of a red powder which, Kelley claimed, he and a certain John Blokley had been led to by a "spiritual creature" at Northwick Hill. (Accounts of Kelley's finding the book and the powder in the ruins of Glastonbury Abbey were first published by Elias Ashmole, but are contradicted by Dee's diaries.) With the powder (whose secret was presumably hidden in the book) Kelley believed he could prepare a red "tincture" which would allow him to transmute base metals into gold. He reportedly demonstrated its power a few times over the years, including in Bohemia (present Czech Republic) where he and Dee resided for many years.


With Dee in the Continent

In 1583, Dee became acquainted with Prince Albert Lasky, a Polish nobleman interested in alchemy. Dee, along with Kelley and their families, accompanied Lasky to the Continent. Dee sought the patronage of Emperor Rudolf II in Prague and King Stefan of Poland; Dee apparently failed to impress either monarch.

Dee and Kelley lived a nomadic life in Central Europe. They continued with their spiritual conferences, though Kelley was more interested in alchemy than in scrying.In 1586, Kelley and Dee found the patronage of the wealthy Bohemian count Vilem Rozmberk. They settled in the town of Trebon and continued their researches.

In 1587, Kelley revealed to Dee that the angels had ordered them to share everything they had including their wives. It has been speculated that this was a way for Kelley to end the fruitless spiritual conferences so that he could concentrate on alchemy, which, under the patronage of Rozmberk was beginning to make Kelley wealthy.

Dee, anguished by the order of the angels, subsequently broke off the spiritual conferences even though he did share his (beautiful) wife. He did not see Kelley again after 1588, and returned to England the following year.

By 1590, Kelley was living an opulent life. He received several estates and large sums of money from Rozmberk. He convinced many influential people that he was able to produce gold. Rudolf made Kelley a "Baron of the Kingdom," but eventually he tired of waiting for results. Rudolf had Kelley arrested in May of 1591 and imprisoned in Krivoklat Castle (Purglitz in German) outside Prague. Rudolf apparently never doubted Kelley's ability to produce gold on a large scale, and hoped that imprisonment would induce him to cooperate. Rudolf may also have feared that Kelley would return to England.

Around 1594, Kelley agreed to cooperate and produce gold; he was released and restored to his former status. Again he failed to produce, and was again imprisoned, this time in Hnevin Castle in Most. Kelley died in 1597 at the age of forty-two. A tradition has him dying while trying to escape: the story goes that he used an insufficiently long rope to lower himself from a tower, fell and broke his leg, and died from his injuries.

Kelley's "angels" sometimes communicated in a special "angelic" or Enochian language. Dee and Kelley claimed the language was given to them by angels. Some modern cryptographers argue that Kelley invented it. See for example the work by Donald Laycock. It is not clear whether Dee was a victim or an accomplice of this farce. Because of this precedent, and of a dubious connection between the Voynich Manuscript and John Dee through Roger Bacon, Kelley has been suspected of having fabricated that book too, in order to swindle Rudolf.

The angelic language was supposedly dictated by angels that Kelley claimed to see within a crystal ball. The angels were said to tap out letters on a complicated table, something like a crossword puzzle but with all the cells filled in. The first third were tapped out with each angelic word backwards; the following two thirds with each word forwards. Interestingly, there are no significant errors or discrepancies in word usage between the first and following parts.

The English translations were not tapped out but, according to Kelley, appeared on little strips of paper coming out of the angels' mouths.The reasoning that Kelley fabricated the language is based upon the claim that the angelic is just a word-for-word substitution for English translation.

This is not entirely the case, however, and there is tantalizing evidence of some other linguistic source. For example, the angelic word "telocvovim" is glossed as "he who has fallen" but it is actually a Germanic-like combination of two other angelic words: "teloch" (glossed as "death") and "vovin" (glossed as "dragon"). Thus "he who has fallen" would be literally translated as "death dragon", both rather obvious references to Lucifer. Interestingly, though, neither Kelley nor Dee appears to have noticed or remarked on this.

Another argument against Kelley's fabrication of angelic is that the english translations are in a very different style of writing to that of Kelley's own work, exhibiting an eldrich quality that seems beyond Kelley's own modest ability as a writer. This raises the possibility that Kelley might have plagiarized the material from a different source. However, no similar material has ever surfaced.

Dee considered the dictation of the angelic material as highly important for three reasons.

First, Dee believed the angelic represented a documentable case of true "glossalia" thereby proving that Kelley was actually speaking with angels and not from his imagination.

Second, the angels claimed that angelic was actually the original prototype of Hebrew and the language with which God spoke with Adam, and thus the first human language.

Third, the angelic material takes the form of a set of conjurations that are supposed to summon an extremely powerful set of angelic beings who, he believed, would be able to reveal many secrets, especially the key to the Philosopher's Stone.