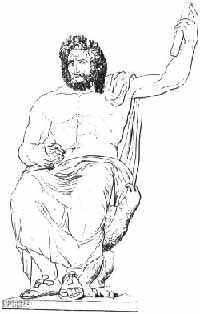 In Roman mythology, Jupiter held the same role as Zeus in the Greek pantheon. He was called Juppiter Optimus Maximus Soter (Jupiter Best, Greatest, Saviour) as the patron deity of the Roman state, in charge of laws and social order. He was the chief god of the Capitoline Triad, with Juno and Minerva.

Jupiter is a vocative compound derived from archaic Latin Iovis and pater (Latin for father), this was also used as the nominative case. Jove is an English formation based on Iov-, the stem of oblique cases of the Latin name. Its Vedic equivalent is Dyaus Pita. The name of the god was also adopted as the name of the planet Jupiter, and was the original namesake of the weekday that would come to be known in English as Thursday (the etymological root can be seen in various Romance languages, including (accusative Iovem, genitive Iovis, dative Iovi and ablative Iove - an irregular declension). Linguistic studies identify his name as deriving from the Indo-European compound "O Father God", the Indo-European deity from whom also derive the Germanic Tiwaz (after whom Tuesday was named), the Greek Zeus, and the French jeudi, Castilian jueves, Italian giovedě and Catalan dijous, all from Latin Iovis Dies, whereas English takes his Norse equivalent, Thor). 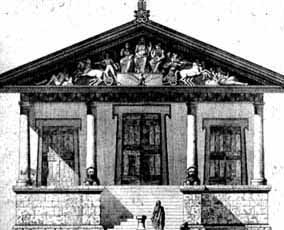 It was once believed that the Roman god Jupiter was in charge of cosmic Justice, and in ancient Rome, people swore to Jove in their courts of law, which lead to the common expression "By Jove!", still used as an archaism today. In addition, "Jovial" is a medium-common adjective still used to describe people who are jolly, optimistic, and buoyant in temperament.

In Greek mythology, Jupiter is Zeus or Z, the king of heaven and Earth and of all the Olympian gods. He is depicted with lightning bolts to remind us that reality is created by electromagetic energy which moves the magic and mystery of our program through grid consciousness, towards Zero Point. 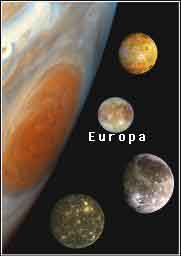 If Jupiter's satellite, Europa, has oceans as many suspect, there is a theory that extraterrestrial life could exist there. Fishing for aliens Guardian - July 18, 2002 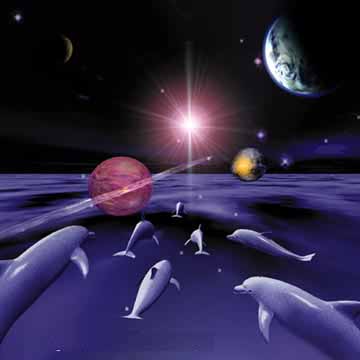 A metaphysical theory states that life on European is connected to the dolphins on planet Earth, communication via telepathic tones.

Jupiter as Zeus or Z, is depicted as throwing zig-zig lightning bolts to remind us that reality is created by electromagetic energy which moves the magic and mystery of our program through grid consciousness, towards Zero Point.

Jupiter is the method each of us has for dealing with the laws of life, our Saturn or limitations. The Hindu word for Jupiter is Guru and this planet indicates our particular Dharma, the way we can solve the problems that confront us. Thus Jupiter has to do with our vocation, the way in which we can be successful. Jupiter is the light or path. The largest planet in the solar system, Jupiter represents the principles of growth and expansion.